As the U.S. turns its back, poor countries can expect more volatile temperature swings 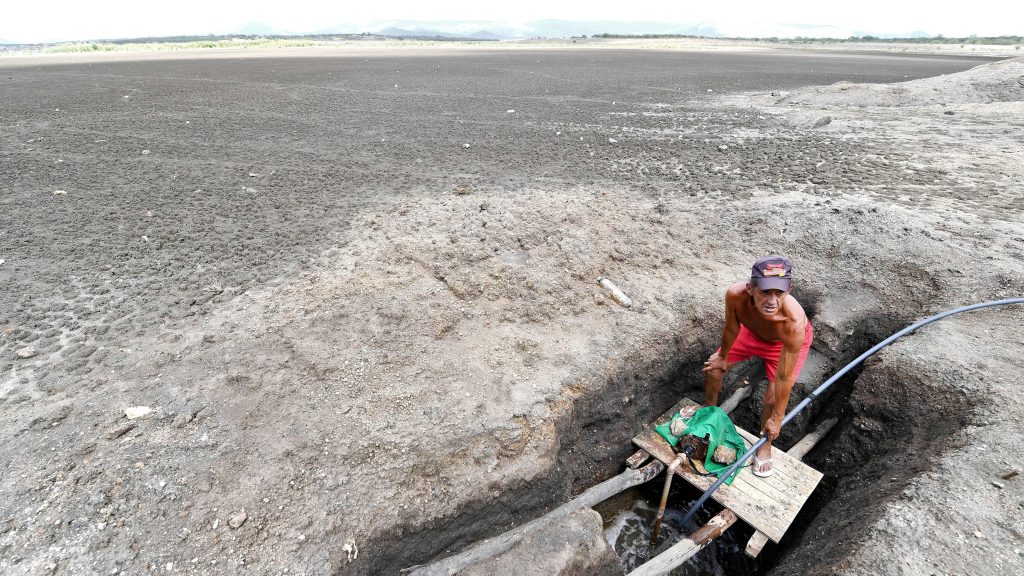 A man operates a water pump at Brazil's oldest reservoir in the northeast of the country. EVARISTO SA/AFP/Getty Images
going to extremes

As the U.S. turns its back, poor countries can expect more volatile temperature swings

The effects of climate change are already hitting hardest in the parts of the world that have contributed the least to our current state of affairs. That, we already know. Now, new research indicates these same regions, among the globe’s poorest areas, will experience the most dramatic variations in temperature over the next 80 years — higher highs and lower lows.

A team of European researchers examined 37 global models of how the climate could change by 2100, averaged them, and identified hotspots where it appeared temperature would fluctuate wildly. Areas around South America’s Amazon rainforest, in southern Africa, the Arctic coast, as well as subtropical areas in the Northern Hemisphere, such as the Sahel region of Africa and parts of India, are in line for volatile weather.

“The most important finding is this unfair pattern of temperature-variability change,” explains Sebastian Bathiany, a post-doctoral researcher at Wageningen University in the Netherlands and the lead author of a study published this week in Science Advances. “Large fluctuations are more difficult for systems and the environment to cope with. So that means that the more negative impacts are in the poorer countries.”

Northern Kenya, for example, has become increasingly dry, resulting in droughts that further exacerbate poverty. Some reports have predicted that by 2030, food prices in sub-Saharan Africa will increase by 12 percent because of lower crop productivity.

Meanwhile, industrial regions, like the U.S. and China, which are most to blame for global warming, will have relatively stable temperatures. The study predicted that temperature variability will actually decrease with global warming for those outside tropical regions.

Back in 2010, at the United Nations Climate Change Conference in Cancun, Mexico, developed nations formally pledged to scrape together a fund of $100 billion each year by 2020 to help developing countries gird themselves against warming. But just this week, as those more vulnerable nations sought greater assurances that the money would materialize, the U.N.’s climate chief, Patricia Espinosa, said current climate investment is akin to “walking into a Category 5 hurricane protected by only an umbrella.” And studies like Bathiany’s suggest that the threats facing the developing world are only mounting.

According to the new report, the most at-risk hotspots for temperature variability are along the Amazon, where increasing temperatures are drying out soil. That moisture is critical for moderating temperatures, keeping them from skyrocketing or dipping too low.

“The Amazon is predicted to become drier,” Bathiany says. “There will be droughts there.”

For Christian Poirier, program director at Amazon Watch — an environmental justice group focusing on indigenous peoples in the Amazon Basin — Bathiany’s findings echo what his organization hears from its partners. “People in the Amazon are suffering, I would say, far more than what we experience in the north,” he says.

Given that’s the case, wealthier nations should provide at least technical and financial assistance, says Randall Abate, a law professor at Florida A&M University who focuses on the climate justice. “We have an ongoing responsibility to address what’s happening in the developing world, forever,” he says, “until we don’t have a world anymore.”

According to Abate, there is little discussion of liability in the global climate conversation, including accords like the Paris Climate Agreement. Commitments are on a voluntary basis and can be withdrawn. For example, under the Obama administration, the U.S. had pledged $3 billion to the $100-billion Green Climate Fund. But President Trump has said that he won’t follow through on the $2 billion left to contribute.

“Right now the developed countries are much more of a mindset that we’ll help you out to the extent we can, but we have no responsibility to do so,” Abate explains. “That’s where the liability piece comes in. Liability would say, ‘You are responsible.’”

It’s not just the U.S. that’s welching on its promise. Despite some encouraging signs, says Amazon Watch’s Poirier, global action is lacking.

“I think a lot of it has to do with environmental racism,” Poirier says. “These are poor people, they don’t vote in our elections, we don’t really care about them.”

At the ongoing Bonn Climate Conference, the latest round of U.N. climate negotiations — where delegates are figuring out how elements of the Paris Climate Agreement can be put into practice — the world’s poorer countries are again imploring their wealthier peers to come to their rescue.

“Keeping global temperature increase below 1.5 degrees Celsius is a matter of survival,” Ethopia’s Gebru Jember Endalew, the chair of the Least Developed Countries group, said at a press conference Tuesday. “There remains a vast gap between the support needed and support received.”