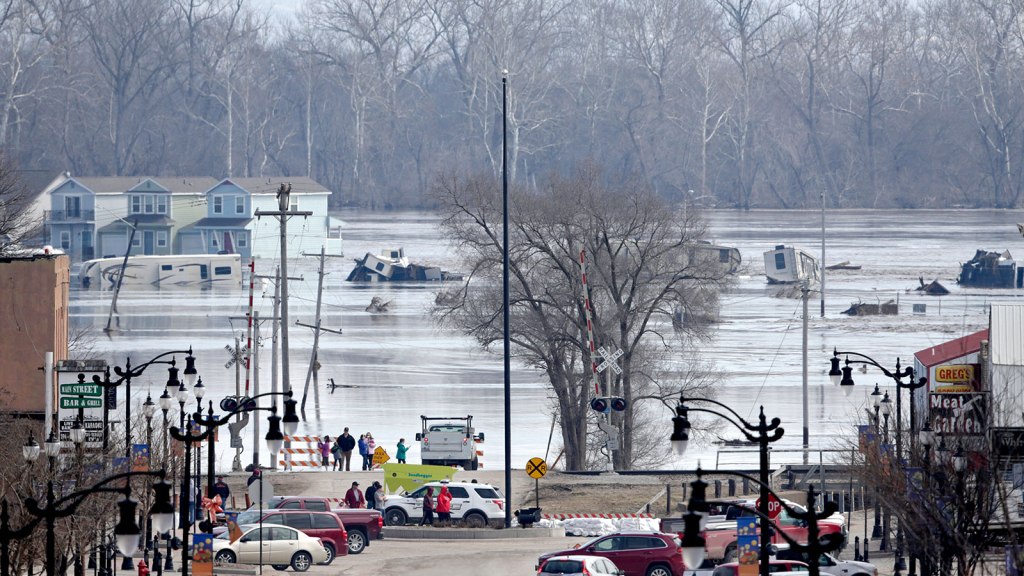 Governor Pete Ricketts has declared more than half of Nebraska’s 93 counties a disaster area as record-breaking spring floods have swollen into a catastrophe. “This really is the most devastating flooding we’ve probably ever had in our state’s history, from the standpoint of how widespread it is,” Ricketts told CNN on Monday. Even the National Weather Service in Omaha was forced to abandon their office due to flooding.

Here’s how it happened: Last week, a hurricane-strength storm system unleashed torrential rainfall over the deep Nebraska snowpack, flash-melting huge quantities of water and overwhelming dams and levees. Unusually warm temperatures have remained in place since the storm’s passage, worsening the runoff. The resulting flooding has been visible from space.

The most spectacular flooding resulted from the failure of the 90-year-old Spencer Dam on the Niobrara River in north-central Nebraska when it unleashed an 11-foot wall of water on Thursday. Before the flood gauge on the river failed, “it looked like something incredible was happening that we couldn’t believe,” Jason Lambrecht, a Nebraska-based hydrologist with the U.S. Geological Survey told the Lincoln Journal-Star. “And suddenly, everything went dark.”

The flash flood destroyed roads, homes, and bridges before emptying into the Missouri River and joining with meltwater from South Dakota and Iowa. On Saturday, two levees breached on the Platte River, cutting off the town of Fremont, Nebraska — the state’s sixth-largest city. A volunteer airlift has been supplying the city over the weekend and performing rescues.

As of Monday, water levels have crested in most of the state, though major flooding will continue for several days. Offutt Air Force base near Omaha — the home of U.S. Strategic Command — remains inundated, a poignant sign of climate change as a national security risk. There are dozens of road closures across the area.

Eastern Nebraska is just the worst-hit region: Major flooding is currently underway in parts of seven states in the upper Midwest, with near-record flooding expected to spread northward into Minnesota and North Dakota in the coming weeks. In Minnesota, officials expect a greater than 95 percent chance of major flooding, possibly rivaling all-time records.