You’re about to start seeing the term “regenerative” when you scan packages of Cheerios and boxed mac and cheese in the grocery aisles. Depending on who you ask, it’s either clever marketing or a fix for climate change in a single stroke. Either way, if you’re looking for the next big foodie buzzword, this is it.

It was clear the term had legs when General Mills recently heralded plans to start using “regenerative” practices on a million acres.

So what does regenerative mean? Many things to many people. To some, it’s a way organic and conventional farmers can work together on achieving environmental ends, rather than fighting over the means. To others, it’s a move to make farms sop up carbon. Still others consider it a tactic to attract customers who buy organic, or maybe a quasi-spiritual concept.

“There’s a lot of different meanings, a lot of different philosophies, and just a little bit of greenwashing already occurring,” Matthew Dillon, director of agriculture for Clif Bar, told a reporter at a food expo. (For companies like Clif Bar, which have bet their marketing budgets branding themselves “organic,” the label “regenerative” could look like a threat.)

But there’s one definition everyone seems to agree on: Regenerative farming means you’re getting carbon out of the air and into the soil. There have been some eye-popping claims about how much carbon we could capture. According to the Rodale Institute, a nonprofit that supports organic farming, regenerative techniques “could sequester more than 100% of current annual CO2 emissions with a switch to widely available and inexpensive management practices.” 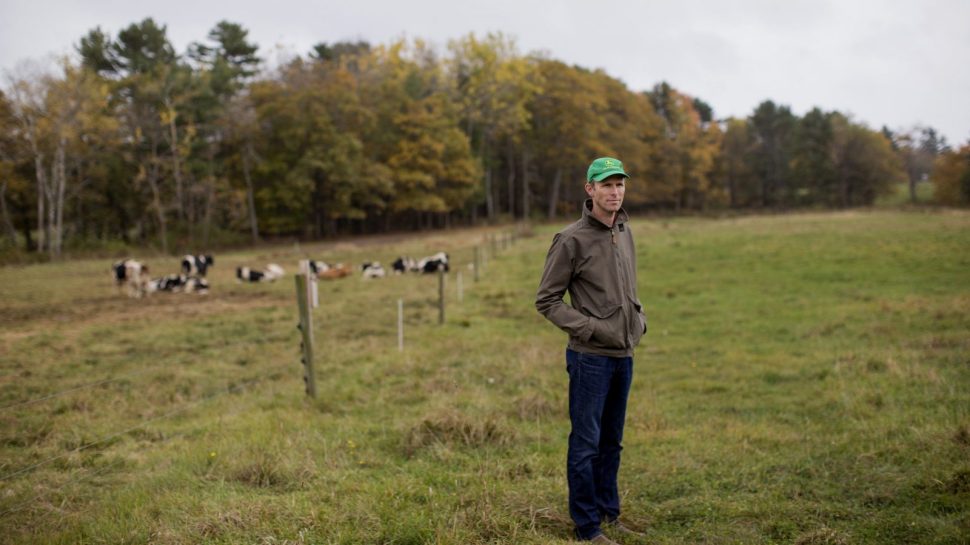 David Herring at the Wolfes Neck Center for Agriculture and the Environment in Maine, which started with a commitment to organic dairying and has added restorative practices. Brianna Soukup / Portland Press Herald / Getty Images

There’s nothing arcane about those management practices. They’re the sort of things ag-schools are teaching students across the country. The various different sects of regenerative ag each have their own special techniques, but they all share the basics: Minimize tillage (i.e. soil disturbance, like plowing), keep the land covered with plants at all times, rotate a diversity of crops and livestock across the fields.

“All those practices are supported by evidence, that all makes sense,” said Andrew McGuire, an agronomist at the Washington State University Extension in Moses Lake, Washington. “But then people make these claims that go way beyond what the science suggests.”

If you’re going to go around saying that we can solve our climate problems just by growing food, you’d better have a pile of evidence to back it up, McGuire said. When McGuire suggested in a blog post last April that some of the achievements regenerative farmers are claiming might be exaggerated, he didn’t make himself any new friends from that group.

“I hesitate about how far I should go in pointing out the places where the claims depart from the evidence,” he said. “Because even if they don’t achieve the extremes some of these people are claiming, they are definitely doing a good thing.”

Tim LaSalle, cofounder of the Regenerative Agriculture Initiative, a research and education program at California State University in Chico, acknowledges that many will remain skeptical without strong science to back up the claims of regenerative ag. “We just need to get the research and replication,” he said.

Birth of a buzzword

The term “regenerative” goes back, at least, to publishing scion Bob Rodale, who popularized organic farming with lifestyle and gardening magazines until he died in 1990. Rodale noticed that people were latching onto the word “sustainable,” which he considered uninspiring. If sustainability is the main goal, the best you can do is hold everything in place: “I don’t think the average person aspires to live in a sustained environment, they want to live in something that’s expanding and getting better,” he told an interviewer in 1989. “So I think the idea of regeneration is more appealing.”

Rodale was clearly thinking hard about marketing here, but for years the term “regenerative agriculture” languished in relative obscurity. Today, two forces are pushing it forward: The rising awareness of climate change, and the rise of environmentally conscious farmers who don’t want anything to do with “organic.”

Some organic farmers have embraced the “regenerative” moniker as a sign that they are addressing the climate crisis. Last year, the Rodale Institute, the outdoor gear company Patagonia, and hippie soapmaker Dr. Bronner began working on a new “Regenerative Organic” certification designed to get farms capturing carbon, among other things. This certification prohibits advanced genetic techniques for plant breeding, along with all synthetic fertilizers and pesticides.

There’s also a very different set of non-organic farmers calling themselves regenerative practitioners. Some of these farmers come out of the no-till movement, which eschews all plowing. Others are followers of the grazing guru, Allan Savory, who spread a theory that grasslands would flourish when ranchers tightly clustered cattle in small areas for a day or two at a time. Many of these farmers embrace technologies like genetically modifying seeds and favor the judicious use of synthetic fertilizer and pesticides, reasoning, for instance, that a little bit of a synthetic pesticide is better than a lot of the certified organic pesticide. 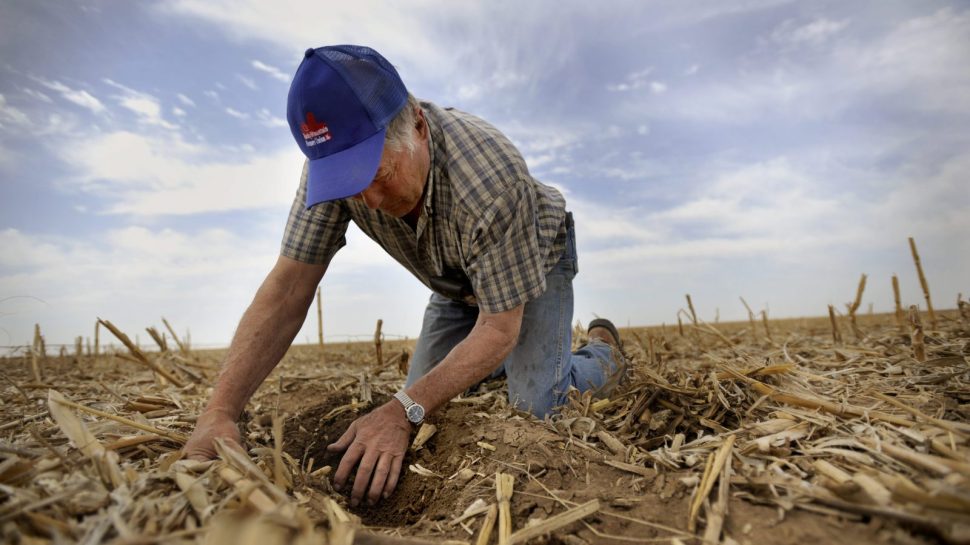 LaSalle has traversed that spectrum. He was CEO of the Rodale Institute, executive director of the Allan Savory Center, and research coordinator at the non-organic Howard G. Buffett Foundation.

“Personally I grew tired of the organic-conventional argument,” LaSalle said. One reason he likes the term regenerative, is that it side-steps the unending debates over agricultural technology. “It takes the purist arguments out, stops the tribalism and opens to conversations of soil health, farmer profit, better water cycles,” he said.

So maybe regenerative ag could lead to reconciliation. If farmers and eaters stopped fighting over things like genetically modified seeds, and synthetic nitrogen and focused on results, they might find they have a lot in common.

Eating our way to Eden 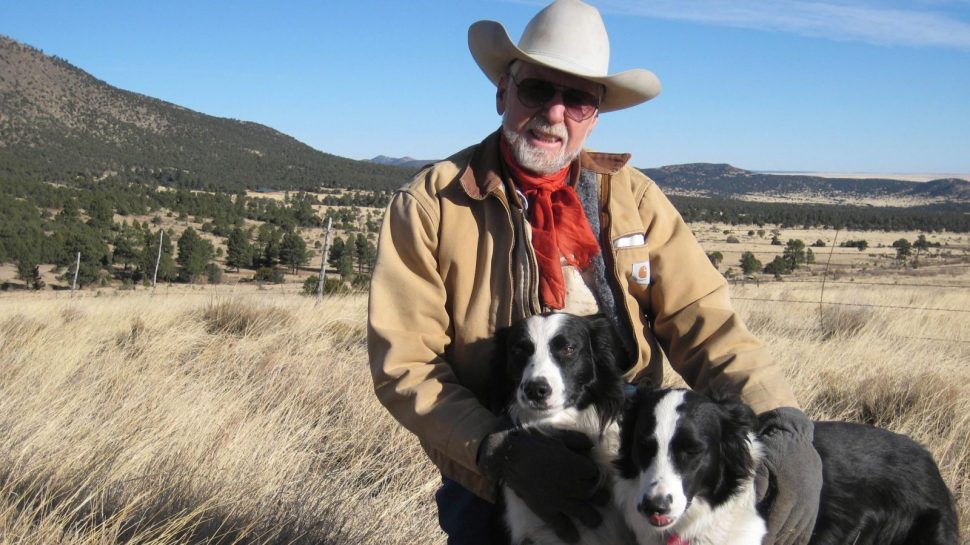 Another branch in the regenerative lineage comes from followers of Allan Savory and his ideas about intensively grazing one small area at a time. Rancher Sid Goodloe has been practicing so-called holistic management on his land since the 1950s. Moises Velasquez-Manoff / The Christian Science Monitor / Getty Images

The word regeneration implies regaining something that was lost, like a gecko regenerating its tail. If you need regeneration it means you’re in trouble, and need to return to a more glorious past. It’s a potentially powerful word for this moment of environmental crisis.

Rodale wasn’t the first to hit on this, said Alan Levinovitz, a religious studies professor at James Madison University. The idea of regeneration pops up in several spiritual traditions.

“It contains an acknowledgement of having done wrong, and the promise of redemption,” he said.

For people feeling that they have fallen from grace, who yearn to return to a time without fossil fuels, the idea of regenerative agriculture could hold real power. Let’s just hope that power is put towards pragmatically improving agriculture, rather than abandoning science for religious adherence to an idea.

How Alexandria Ocasio-Cortez’s Green New Deal is being built