Religious freedom isn't just for Hobby Lobby -- it's for indigenous rights, too 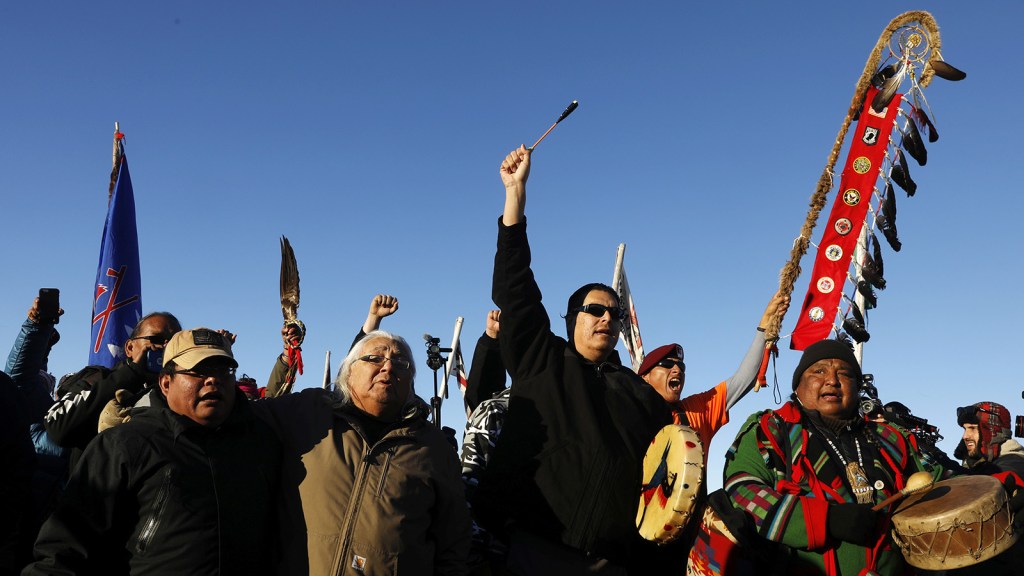 Last week, the Standing Rock Sioux celebrated what they believe is a ground-breaking legal victory in the protracted fight against the Dakota Access Pipeline.

A federal judge in Washington, D.C., ruled that the U.S. Army Corps of Engineers violated the National Environmental Policy Act (NEPA) in its expedited review of the pipeline, which was ordered by President Trump shortly after taking office. According to Judge James Boasberg, the Army Corps “did not adequately consider the impacts of an oil spill on fishing rights, hunting rights, or environmental justice.”

On Wednesday, the parties in the DAPL case will appear in court for a hearing about how to respond to the NEPA ruling. Oil could stop the flowing under Lake Oahe, the fourth-largest dam reservoir in the Dakotas. But that stoppage would be temporary.

If the Army Corps does revise its environmental assessment, the court could allow the pipeline to resume operation. The court and the Army Corps would have “served” environmental justice under NEPA — merely by paying lip service to the struggle for indigenous rights in the United States.

Lake Oahe stands at the center of a painful, decades-long story regarding the marginalization of Native Americans. In 1958, the Army Corps took over 200,000 acres from the Standing Rock and Cheyenne River Sioux, forcing them from their homes and sacred religious sites, so it could build a dam. Fast-forward nearly 60 years, and the reservoir created by the dam draws a million yearly tourists to its more than 50 recreational sites. It’s under the Sioux’s once hallowed ground — now at the bottom of Lake Oahe — where the Army Corps decided to route part of the Dakota Access Pipeline.

Earlier this year, as I was completing my law degree at New York University, President Trump fast-tracked the project’s completion. In the legal battles that ensued, teams of lawyers  — both large and small — took up the cause of the tribes and the thousands of pipeline activists that joined them, collectively known as “water protectors.”

Benjamin Eichert, director of the grassroots movement Greenpower, formed the Lakota People’s Legal Project to highlight the statutory issues regarding the construction of the pipeline. I joined the effort as legal researcher.

The oil flowing under Lake Oahe is not only a potential environmental calamity, it is a dagger through the heart of the Sioux tribes — and the NEPA ruling, while certainly a win, will not offer meaningful justice to those at Standing Rock.

One unlikely legal strategy that nearly did — and could loom large in future fights to protect indigenous land — is the Religious Restoration Freedom Act, a fan-favorite amongst the religious right.

Conservatives successfully employed the statute to argue that corporations with deeply-held religious beliefs, like the arts-and-crafts chain Hobby Lobby, could deny contraceptive coverage to female employees. In 2014, the Supreme Court sided with Hobby Lobby, finding that providing that perk against its corporate values constituted a “substantial burden” on the company’s free exercise of religion.

In February of this year, attorneys for the Sioux tribes turned to the same playbook when seeking a preliminary injunction to prevent the completion of the Dakota Access Pipeline under Lake Oahe. They argued that its construction desecrated the sole water source for the sacred Inipi ceremony — and would release untold calamities upon the Cheyenne River Sioux, as prophesied by their elders.

The argument framed the #noDAPL movement as an indigenous rights issue — and not just an administrative violation — for the first time in the legal realm.

Judge Boasberg pressed attorneys for the Sioux on whether they attributed the religious burden to the pipeline itself or the oil flowing through it. When the lawyers conceded that it was the oil — which wouldn’t flow for a few more weeks — the court found the pipeline would not present an imminent harm to the Sioux’s religious practices.

While the argument collapsed in this case of DAPL, it’s worked in the past. In 2008, a federal judge in Oklahoma granted an injunction in response to a religious freedom claim by the Comanche tribe against the United States government. The ruling prevented the construction of a military warehouse that would block the last clear view of the Medicine Bluffs, an essential vista for the tribe’s religious practices.

With numerous other encroachments onto indigenous land on the horizon, the religious freedom argument remains viable and relevant, with the Medicine Bluffs case as a hopeful precedent. The Trump administration may construct a border wall on burial sites in Arizona’s Tohono O’odham Nation. And it’s moving to open up the sacred Bears Ears National Monument in Utah to industrial development.

Using the Religious Restoration Freedom Act to connect environmentalism with indigenous rights does far more for environmental justice than procedural laws like NEPA. In the legal and grassroots battles to come, we should remember that these legal challenges are not just about oil spills or environmental impact statements, they are about the very fabric that unites a people.

Kartik S. Madiraju is a graduate of New York University School of Law, where he was a Root-Tilden-Kern Scholar and studied environmental law, civil rights, and constitutional law. He currently helps represent island nations in climate change negotiations.