GOP Rep. Mike Simpson: It’s my party, and I’ll fight climate change if I want to 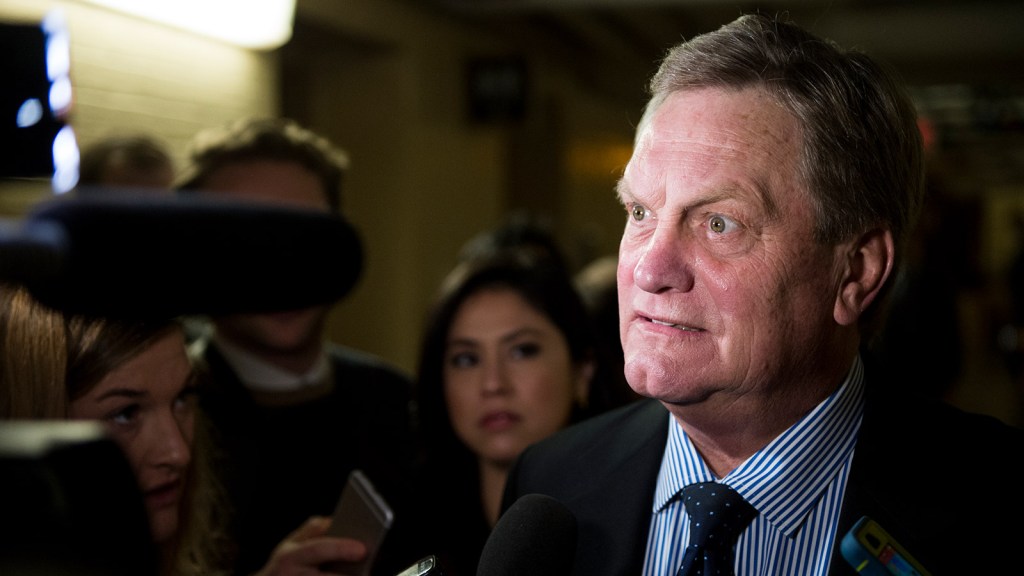 GOP Rep. Mike Simpson: It’s my party, and I’ll fight climate change if I want to

In deep red Idaho, out of sight of the national news media and out of reach of the Twitterati, a real-live Republican member of Congress acknowledged the existence of climate change and even proposed taking action.

“Climate change is a reality,” said Mike Simpson, a Republican Congressman from Idaho, at a conference in Boise last week. “It’s not hard to figure out. Go look at your thermometer.”

Simpson knew he might hear a record scratch when he broke out of the well-worn Republican grooves. After stepping to the lectern, he joked that anyone carrying matches or lighters should pass them to the authorities as a security measure to prevent heads from bursting into flames.

Simpson was there to say he wanted to see Idaho’s mountain lakes full of salmon again, even if it meant tearing down the dams that the state’s politicians have defended for decades. Dams, climate change, and predators all threaten the fish, and Simpson said he was ready to consider all options. It was clear to anyone watching his speech he feels a spiritual obligation to save salmon.

Recounting a trip to a spawning creek in the Sawtooth Mountains in central Idaho, Simpson paused to swallow hard a couple of times. Only one salmon made it to those shallows, he said, to “create its bed, lay its eggs and die. It was the end of a cycle and the beginning of a new one. These are the most,” he paused for a deep breath, “most incredible creatures I think that God’s created. It’s a cycle God has created. We shouldn’t mess with it.”

This break with standard Republican talking points has people asking if he had “gone over to the dark side,” Simpson said. “I’ve had people say to my chief of staff, we don’t even like someone of Simpson’s seniority asking these questions.” And in the run up to this speech, he said his office was fielding calls from nervous people asking, “What’s Simpson going to say at this?”

Of course, Simpson isn’t the first Republican advocating for action on climate change, but most of those politicians differ from Simpson in one important way: They come from swing districts. In fact, the bipartisan Climate Solutions Caucus in the House of Representatives (Simpson isn’t a member) has a hard time keeping Republicans because voters keep kicking them out in favor of Democrats. Former representatives Carlos Curbelo, Mia Love, and Peter Roskam are exhibits A, B, and C.

Simpson was just elected to his 11th term in the House, so he isn’t pivoting left to get in front of his voters. Elections in Idaho are usually decided in the Republican primaries (personal aside: I started my reporting career covering politics — and everything else — in Idaho). In this part of the country, tacking to the right is smart politics; tacking to the left is often political suicide.

Simpson’s suggestion to consider tearing down dams is, if anything, even more taboo than an embrace of action to curb climate change. “In the past, the people talking about removing dams have been the environmentalists outside screaming and throwing pebbles against the walls of the halls of power,” said Sean O’Leary, communications director for the NW Energy Coalition a regional conservation group. “Now Simpson is saying the same things.”

In black and white text, Simpson’s words may read like political hyperbole — but it didn’t come across that way in the room.

“I looked over to my right and Simpson’s wife was sitting there with tears in her eyes,” O’Leary said. “No, this was genuine.”

In his speech, Simpson said he wanted to study every possible salmon fix, including removing four dams on the Lower Snake River, just across the border in Washington state. But this is about a lot more than fish. The public power agency that sells electricity from the 31 federal dams in the Northwest, the Bonneville Power Administration, is in deep trouble. It’s paying billions to try and rescue salmon, which drives electric rates up, Simpson explained. As a result, utilities and rural electric co-ops are thinking about buying electricity elsewhere, especially now that the combination of natural gas and renewables is providing cheaper rates.

Simpson sees the BPA’s problem as an opportunity: Maybe there’s a way to fix the salmon runs and the BPA in one fell swoop.

Everyone knows the status quo isn’t working, Simpson said. After electricity-bill payers and taxpayers spent some $16 billion on salmon, the fish population is still dwindling. Farmers from Idaho are sending precious water downstream to keep water cool for salmon smolt without seeing any increase in the number of fish that come back upstream. The situation isn’t great for anyone, Simpson argued, but all parties are so focused on protecting what they have that they’re unwilling to consider big changes. “We’ve got to stop thinking that way,” he said.

Simpson’s appeal might just work because he’s dealing with a regional issue, where the tangible facts can replace the hallucinations that accompany partisan rage. While national politics might seem like it’s all about rooting your side on, Idaho is full of farmers, outfitters, fishers, and electricity buyers who are more interested in finding solutions, said Justin Hayes, program director of the Idaho Conservation League. And all these people can see that the status quo is failing.

“It’s clear to everyone that the strategy of ‘our interests are more important than your interests, let’s fight’ doesn’t work,” Hayes said.

How does climate change enter into this? Well, removing dams would take a good chunk of clean electricity off the grid. So Simpson wants to replace the dams with new forms of power built in the region. He pointed to the Idaho National Lab’s work on new types of nuclear reactors. In eastern Washington, he said the Pacific Northwest National Lab is “the leader in battery storage in this country.”

So Simpson believes there’s a way to turn this whole mess into a surge of business for Idaho. In that way, he’s not straying from his red-state brand at all. But Simpson is unusual in that he’s willing to shake things up and make himself vulnerable, all to create the possibility of change.

The speech ended with Simpson looking to the end of his own life and his political legacy. “I’ve come to the conclusion that I’m going to stay alive long enough to see salmon return in healthy populations in Idaho … We need to do it for future generations.”