Rising seas could wipe out $1 trillion worth of U.S. homes and businesses 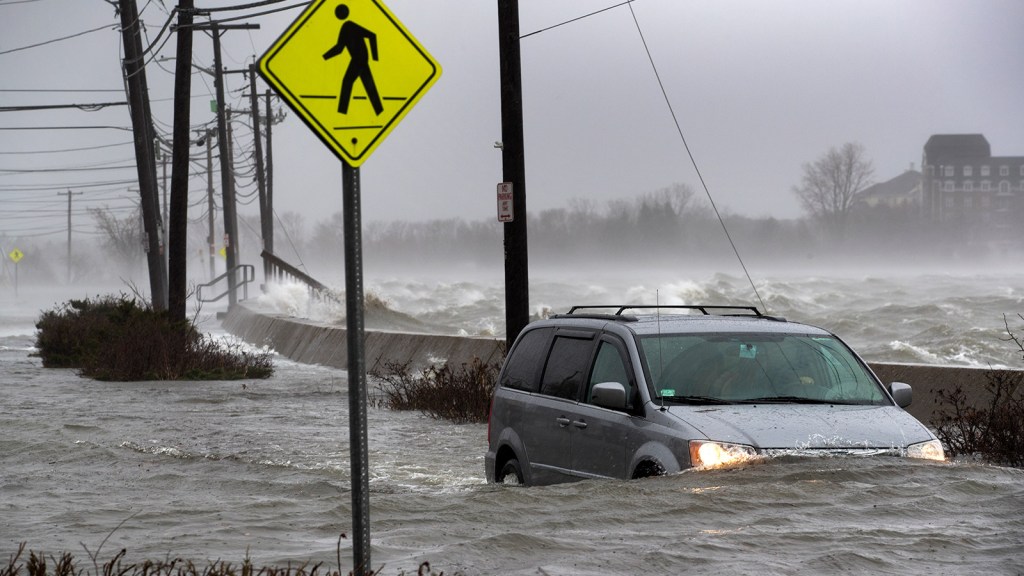 A vehicle navigates a flooded street in the Squantum section of Quincy, MA during a storm on March 2, 2018. Stan Grossfeld / The Boston Globe via Getty Images
underwater

Rising seas could wipe out $1 trillion worth of U.S. homes and businesses

Some 2.4 million American homes and businesses worth more than $1 trillion are at risk of “chronic inundation” by the end of the century, according to a report out Monday. That’s about 15 percent of all U.S. coastal real estate, or roughly as much built infrastructure as Houston and Los Angeles combined.

The sweeping new study from the Union of Concerned Scientists is the most comprehensive analysis of the risks posed by sea level rise to the United States coastal economy. Taken in context with the lack of action to match the scale of the problem, it describes a country plowing headlong into a flood-driven financial crisis of enormous scale.

“In contrast with previous housing market crashes, values of properties chronically inundated due to sea level rise are unlikely to recover and will only continue to go further underwater, literally and figuratively,” said Rachel Cleetus, an economist at the Union of Concerned Scientists, and a report co-author, in a statement. “Many coastal communities will face declining property values as risk perceptions catch up with reality.”

The report defines chronic inundation as 26 flood events per year, or roughly one every other week — enough to “make normal routines impossible” and render the properties essentially worthless. It builds on the group’s previous work to identify the risk of chronic flooding under a sea-level-rise scenario of two meters (6.6 feet) by 2100. Using data from Zillow for every property in every coastal zip code in the lower 48, the results of this week’s report are at once familiar and surprising. (Here’s the interactive map where you can plug in your zip code).

It’s probably no surprise that Miami Beach is the community most at risk nationwide. More than $6 billion could be wiped out by 2045 (within the lifespan of current mortgages). That’s more than 10 percent of the city’s property value. (All amounts are in 2017 dollars).

A more surprising result: New Jersey is the state with the most to lose over the same time frame, eclipsing Florida. In Wildwood, Ocean City, and Long Beach, more than $10 billion is at risk.

In about two percent of all coastal zip codes, rising waters could soon eliminate more than half of property tax revenue. For these communities, like Crisfield, Maryland and parts of Newport Beach, California, sea level rise is an immediate existential threat — city services would have to shutter with such a catastrophic budget shortfall.

Looking further ahead — under the high sea level rise scenario to 2100 — a quarter of Boston would be underwater. Vulnerable barrier islands, like Miami Beach and Galveston, Texas, would be largely uninhabitable. Nationwide, more than $12 billion in property tax revenue would be lost.

The study estimates that Long Island, New York would experience floods at the scale of Hurricane Sandy more than two dozen times a year. The longer the world waits to significantly cut emissions, and the more bad news we discover about the inherent instability of the vast Antarctic ice sheets, the more likely this scenario becomes.

Though the costs and scale of this looming disaster are staggering, it’s important to remember that the catastrophe will hit some people much harder than others. Academics and climate activists have been talking about this for a long time, but local governments have struggled to prepare for a more watery future.

“While wealthier homeowners may risk losing more of their net wealth cumulatively, less-wealthy ones are in jeopardy of losing a greater percentage of what they own,” Cleetus said. “Homes often represent a larger share of total assets for elderly or low-income residents.” For some, taking a $100,000 loss could be a life-shattering blow; for others it’s a temporary setback.

The futurist Alex Steffen calls this situation a “brittleness bubble,” and it’s characteristic of slow-onset but predictable problems like climate change. When the brittleness bubble breaks, those without means — the economically poor, those from marginalized groups — will be forced to abandon their homes and ways of life.

“The risks we face grow with inaction,” Steffen recently wrote. “So, too, do the losses we can expect.”