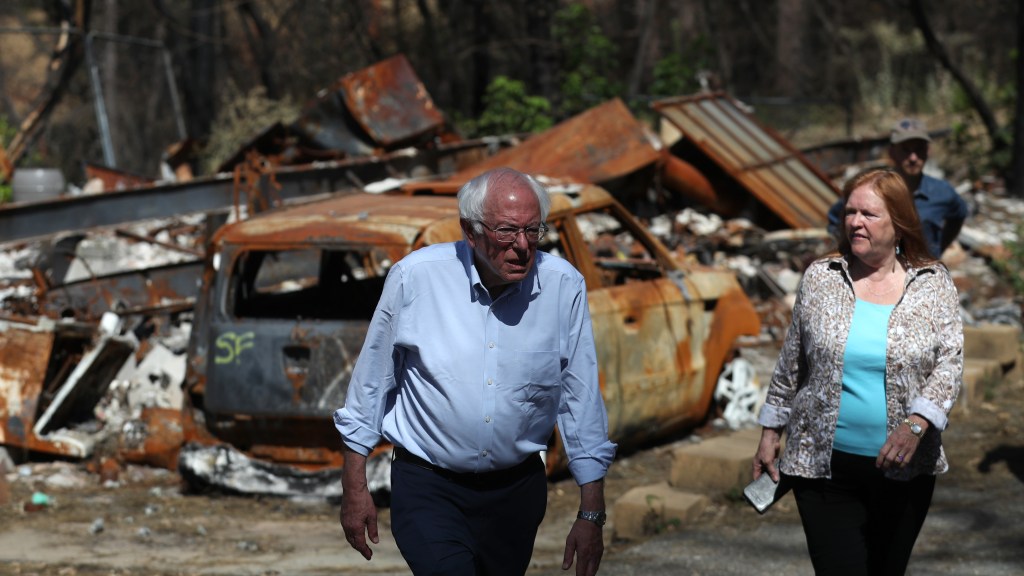 Bernie Sanders wants the United States to combat climate change like a nation at war. The Democratic presidential candidate detailed his new climate platform on Thursday in Paradise, California, while surrounded by devastation that wouldn’t look out of place on a battlefield. Today, Paradise is a ghost of itself after last year’s deadly Camp Fire; thousands of homes and buildings were lost, triggering an exodus that took almost the entire town’s population.

Sanders chose Paradise to launch his climate agenda for the same reason he thinks the public has woken up to the threat. Climate change is visceral, and in Paradise and elsewhere, voters are seeing its damage firsthand. There’s a difference between telling voters climate change is an existential crisis at an indoor rally and describing it while surrounded by the hazardous ash, rubble, and charred trees that once made up the Holly Hills mobile home community.

“People learn with their own eyes,” Sanders said in an exclusive interview with the Weather Channel and Mother Jones, conducted as part of the Climate Desk partnership. “So you come to a beautiful place like this, Paradise, California, and you see the horrible, horrible damage that’s done. You turn on the television, in a community of 26,000 people, 86 dead, some 18,000 structures burned down to the ground, $16 billion in damage. People are saying, ‘What is going on?’”

In announcing his $16.3 trillion proposal, Sanders joined a handful of candidates who have toured Paradise, as well as the pack of frontrunners who had already released their own climate change plans. His robust plan would “launch a decade of the Green New Deal,” promising 10 years filled with an unfathomable and polarizing amount of change: essentially eliminating unemployment with 20 million jobs, new job protections, and a social safety net to go with it. The plan includes funding for displaced fossil fuel workers to find new livelihoods or take early retirement. He envisions a fully clean transportation sector by 2030, by electrifying fleets and launching a $2 trillion car buyback program. He promises a $40 billion climate justice fund, new infrastructure, and a more sustainable agriculture sector. And he says he can do it all while modernizing the power grid, retiring nuclear plants, and halting fracking. Altogether, the Sanders camp says the changes could cut U.S. pollution 71 percent over the next decade, putting the nation on a path to go completely carbon-free by 2050.

The proposal has many elements that seem to fulfill wish lists from Sanders’ left-leaning base. According to Julian Brave NoiseCat of the progressive think tank Data for Progress, Sanders’ plan has “all of the eco-socialist favorites: public ownership, prosecuting fossil fuel corporations, phasing out nuclear, massive federal investment in the economy.” Data for Progress has scored the candidates’ plans against a 48-point rubric they assembled to judge Green New Deal proposals. As a cosponsor of the initial resolution put forward by Senator Ed Markey (a Democrat from Massachusetts) and Representative Alexandria Ocasio-Cortez (a Democrat from New York), Sanders’ plan will surely score highly.

Sanders aims to fund his proposals primarily by making polluters pay. That’s familiar ground for the senator, whose long legislative history on energy issues includes pushing to close oil industry tax breaks. By ramping up polluter penalties, fines from federal lawsuits, and taxes, while counting on more revenue from the millions of jobs created, Sanders claims his programs will pay for themselves in 15 years.

“My plan is a very expensive plan,” he admits. “There will be some job loss, but we create 20 million new jobs. But the fundamental question is do we respond to the degree that the scientific community tells us we must, or do we not? And from a moral perspective, I think we have no choice but to act.”

Recognizing the scope of the economic changes required, Sanders emphasized investments in people who risk being left behind in the transition — from fossil fuel workers to frontline communities, predominantly made up of people of color, that suffer most from climate change.

“When you’re talking about a major transition in the economy you have to make sure we protect the oil workers … the fossil fuel industry, and the coal miners. They are not my enemies,” Sanders says. “People say, ‘Bernie, your plan is going to have an impact on this part of the economy and that part of the economy’ … We’re talking about a planet that will become increasingly uninhabitable and expensive for our children and our grandchildren.”

Sanders insists frontline communities will be at the forefront of his policymaking. His stance against investing in research and technology to captures carbon from fossil fuel plants — on Thursday, he called it a “false solution” — helped win over environmental justice activists who say the technology enables continued pollution in disadvantaged communities. One such group, the Climate Justice Alliance, has endorsed Sanders’ proposals despite past skepticism of Green New Deal proposals.

Whether his plan — or another with similar ambitions — has any chance of becoming law is an entirely different question, one that, even if a Democrat is in the White House in 2021, will fall largely into the hands of Congress. Sanders says that, beyond reinstating the Obama administration’s climate-related executive orders reversed by Trump, he’ll harness the White House’s bully pulpit to press for change. From the Oval Office, Sanders hopes to drive action worldwide, spurring renewed commitments to global climate financing and bigger pledges under the Paris climate change agreement.

“I believe the scientific community and I believe we have to act boldly. I’m not here to suggest that my plan is going to solve every problem,” says Sanders. “But my plan understands the severity of the crisis.”