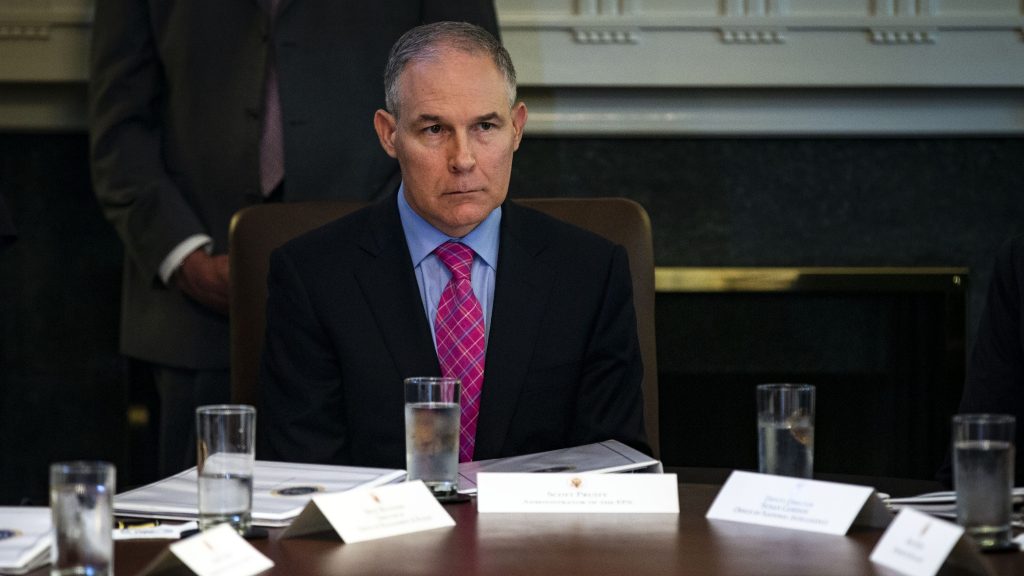 The scandal-plagued Pruitt had long pushed for a public “red team, blue team” debate between mainstream scientists and the small minority of scientists who disagree with them about climate change and its causes. In late 2017, White House officials urged him to abandon the idea.

Yet according to emails obtained by the Guardian through a Freedom of Information Act request, as recently as mid-May 2018 aides were considering an alternative: The agency could ask for public comments on a 2009 legal finding that requires the U.S. government to regulate greenhouse gases.

If by that process the EPA could successfully rescind the conclusion that greenhouse gases endanger public health, the federal government would no longer have to regulate major sources of carbon pollution, including power plants.

According to a former senior administration official speaking on the condition of anonymity, the plan to ask for comments rather than hold a public debate was a compromise struck between the White House and the EPA. In July, however, Pruitt resigned, following dozens of stories about his ethical troubles.

The emails obtained by the Guardian offer a glimpse of how the Trump administration has struggled to settle on a position on climate change.

President Trump himself has repeatedly doubted overwhelming research that shows humans burning fossil fuels are emitting greenhouse gases that raise global temperatures and cause catastrophic environmental changes. A number of top officials have expressed similar feelings or questioned how bad climate change will be, and federal agencies are reversing climate change mitigation efforts for power plants and cars.

However, many Republicans and large energy companies urging Trump to rescind regulations do not want the EPA to debate the 2009 climate change finding, fearing a losing battle.

The Midwest power provider American Electric Power, for example, opposes reconsidering the finding. It has long relied on coal but is shifting its electricity mix.

“I don’t think the business community wants this at all,” said Paul Bledsoe, who was a climate change advisor to Bill Clinton. “They all came out against leaving [the Paris climate agreement]. They all have statements on their websites that they believe in climate science. The last thing they want is to get thrust into the middle of this.”

Pruitt’s most conservative supporters pushed him to reexamine the finding anyway, a move which would require a full scientific review and prompt massive legal battles.

It is not clear how serious the EPA considerations were or whether Pruitt’s staff intended to eventually propose a rollback. Attachments shared in emails between senior staff members included an “Endangerment ANPRM draft,” referring to an “advance notice of proposed rulemaking,” an early step in the regulatory process. Another email contained a version of talking points for a “Notice of Opportunity to Comment.”

Conservative groups, including the Competitive Enterprise Institute, had petitioned the EPA to reevaluate the endangerment finding. The EPA could have posted those petitions and asked for public comments. Or it could have solicited input as part of another climate-related rollback.

The documents referred to in the emails were not released, because the Freedom of Information Act does not require the government to release records that were part of ongoing deliberations. One subject line referenced an afternoon meeting.

The staffers exchanging the drafts, air official Mandy Gunasekara and the policy chief, Brittany Bolen, stayed at the EPA when Pruitt left. In a brief interview this month, Gunasekara said the agency’s “understanding of CO2 and greenhouse gases continues to evolve.” She declined to comment on the released emails. Spokespeople for the EPA and the White House did not respond to requests for comment.

Emails released to the Guardian also showed the EPA air chief, Bill Wehrum, planning in December to make an announcement about the “RTBT,” the notional “red team, blue team” debate.

This month, in a draft rule to ease standards for new coal plants, the EPA said it would accept comments on whether the agency had correctly interpreted the endangerment finding.

Climate advocates say the EPA should be transparent about its plans now.

According to a peer-reviewed paper published last week in the journal Science, scientific evidence showing that greenhouse gases are dangerous to public health is even stronger than it was when the endangerment finding was established in 2009.