Scott Pruitt testified before Congress and it got messy 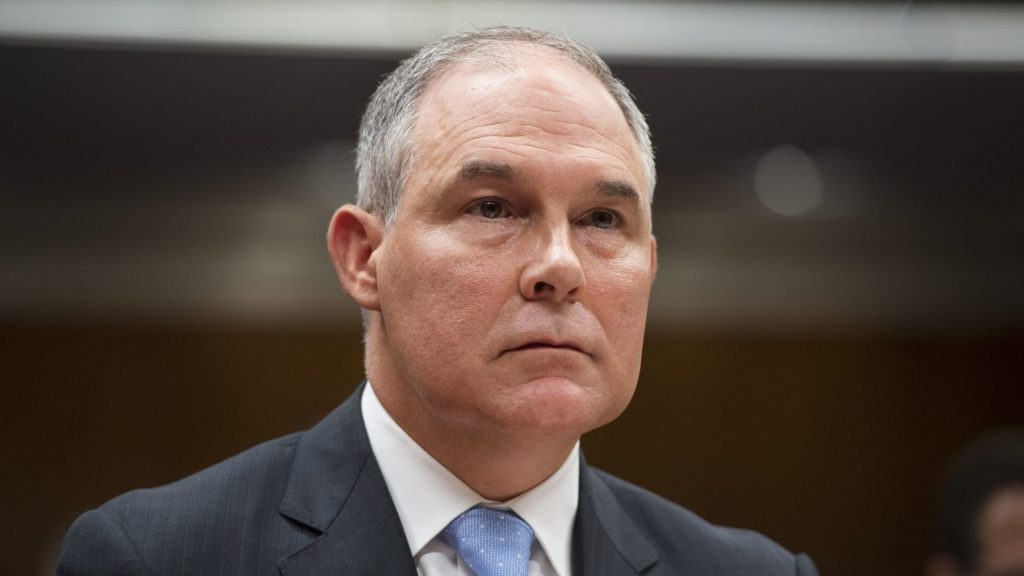 Scott Pruitt testified before Congress and it got messy

On Tuesday, Environmental Protection Agency Administrator Scott Pruitt testified for more than two hours before the Senate Environment and Public Works committee about his first year on the job. While Senate Republicans such as Chair John Barrasso, from Wyoming, and Senator Joni Ernst, from Iowa, gave him credit for helping create jobs by loosening regulations, Senate Democrats were far more concerned with the actions he’s taken that have damaged the functioning of the agency and harmed America’s land, water, and air.

The EPA has touted the massive repeal of regulations as a major achievement of the last year, but Senator Tom Carper, a Delaware Democrat and the ranking member of the committee, saw it differently. “Those are not achievements,” he said. “Those are the complete opposite.”

The night before the hearing, Democrats on the Environment and Public Works committee released a memo entitled “Basically Backward: How the Trump Administration is Erasing Decades of Air, Water and Land Protections and Jeopardizing Public Health.” In it, they outlined some of the steps Pruitt’s EPA has taken to roll back environmental protections. “From nominating extremists to some of the highest posts in our government, to willfully ignoring sound science and stripping the protections that keep millions of Americans safe, this administration has spent its first year reversing the progress our country,” Senator Carper said in a press release about the memo.

During his testimony, Pruitt said that the EPA is going to focus on cleaning up Superfund sites at a faster pace. New Jersey Democratic Senator Cory Booker asked Pruitt if he believed that the 327 Superfund sites that are threatened by climate-fueled flooding deserved immediate attention. “Absolutely,” Pruitt replied, but he did not acknowledge the dangers from climate change. As Carper pointed out, the White House budget has proposed cutting the Superfund budget by 30 percent. Earlier this month, a list circulated by the EPA showed Superfund cleanup successes, seven of which had occurred during the Obama administration.

At his Senate confirmation hearing — which was the last time he had appeared before the committee — Pruitt famously said that he hadn’t looked into the scientific research on lead poisoning, but on Tuesday he announced the launch of a bipartisan war on lead. Senator Tammy Duckworth, a Illinois Democrat, noticed the discrepancy. “Unfortunately, your rhetoric doesn’t match your actions,” she said. “Over the last several months the administration has taken several steps that will make it harder, not easier, to limit lead exposure.” She noted that the White House has proposed slashing programs that reduce lead exposure.

Senator Duckworth went on to cite the EPA’s decision to delay the update to the Lead and Copper Rule, which limits the amount of those substances allowed in drinking water. When the Senator asked Pruitt to answer yes or no to committing to updating the rule before 2020, Pruitt attempted to provide a long explanation. Duckworth insisted on a simple “yes” or “no,” until Pruitt turned to committee chair Barrasso and asked, “Mr. Chairman, may I answer the question?” Duckworth moved on after Barrasso told him he could give a more complete answer later.

She also asked Pruitt about his unexpected trip to Morocco last December, to promote natural gas. “I don’t understand what the sale of natural gas has to do with the EPA’s mission,” Duckworth said. Without giving him time to respond, she then asked for documents containing details of his trips, which Pruitt agreed to provide. Duckworth also asked if he believed the country was a “shithole,” as Trump reportedly said about African countries earlier this month. Senator Barrasso announced her time was up before Pruitt could answer.

But perhaps the most dramatic moment of the hearing came when Senator Sheldon Whitehouse, a Rhode Island Democrat, grilled Pruitt on comments he had made in 2016, when as Oklahoma attorney general he appeared on the Pat Campbell Show. In a story first reported by Documented, a corporate interest watchdog group, Pruitt told Campbell in February 2016, “I believe that Donald Trump in the White House will be more abusive to the constitution than Barack Obama and that’s saying a lot.” Pruitt did not respond while Senator Whitehouse held up posters of his quotes on the show. “Do you recall saying that?” Whitehouse asked him. Finally, Pruitt replied that he didn’t remember making those comments.

After the hearing ended, the EPA put out a formal statement calling Trump the “most consequential leader of our time.”