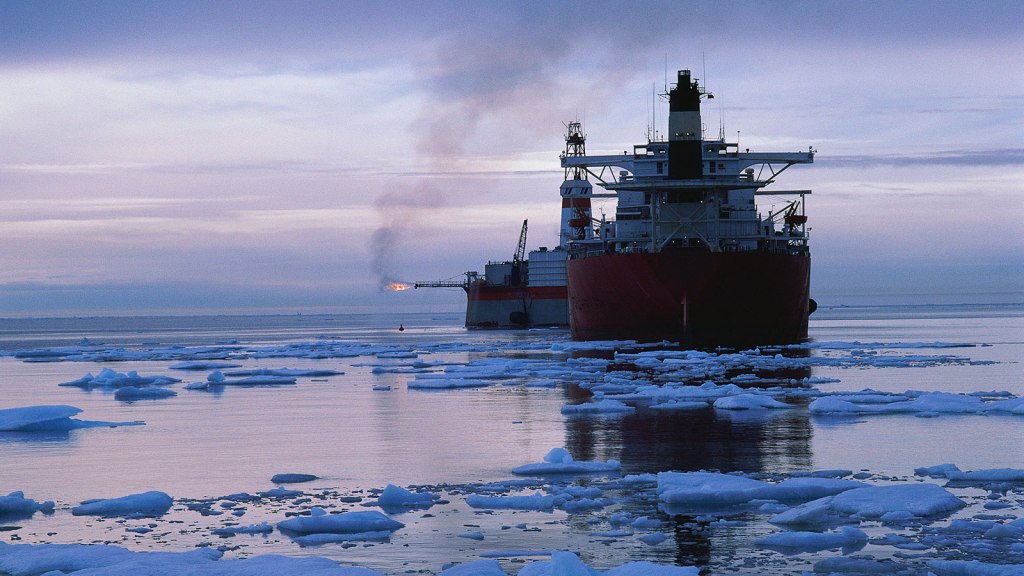 When a blue-hulled cargo ship named Venta Maersk became the first container vessel to navigate a major Arctic sea route this month, it offered a glimpse of what the warming region might become: a maritime highway, with vessels lumbering between Asia and Europe through once-frozen seas.

Years of melting ice have made it easier for ships to ply these frigid waters. That’s a boon for the shipping industry but a threat to the fragile Arctic ecosystem. Nearly all ships run on fossil fuels, and many use heavy fuel oil, which spews black soot when burned and turns seas into a toxic goopy mess when spilled. Few international rules are in place to protect the Arctic’s environment from these ships, though a proposal to ban heavy fuel oil from the region is gaining support.

“For a long time, we weren’t looking at the Arctic as a viable option for a shortcut for Asia-to-Europe, or Asia-to-North America traffic, but that’s really changed, even over the last couple of years,” says Bryan Comer, a senior researcher with the International Council on Clean Transportation’s marine program. “It’s just increasingly concerning.”

Venta Maersk departed from South Korea in late August packed with frozen fish, chilled produce, and electronics. Days later, it sailed through the Bering Strait between Alaska and Russia, before cruising along Russia’s north coast. At one point, a nuclear icebreaker escorted Venta Maersk through a frozen Russian strait, then the container vessel continued to the Norwegian Sea. It’s expected to arrive in St. Petersburg later this month.

The trial voyage wouldn’t have been possible until recently. The Arctic region is warming twice as fast as the rest of the planet, with sea ice, snow cover, glaciers, and permafrost all diminishing dramatically over recent decades. In the past, only powerful nuclear-powered icebreakers could forge through Arctic seas; these days, even commercial ships can navigate the region from roughly July to October—albeit sometimes with the help of skilled pilots and icebreaker escorts.

“Because of climate change, because of the melting of sea ice, these ships can operate for longer periods of time in the Arctic,” says Scott Stephenson, an assistant geography professor at the University of Connecticut, “and the shipping season is already longer than it used to be.” A study he co-authored found that, by 2060, ships with reinforced hulls could operate in the Arctic for nine months in the year.

Stephenson says that the Venta Maersk’s voyage doesn’t mean that an onrush of container ships will soon be clogging the Arctic seas, given the remaining risks and costs needed to operate in the region. “It’s a new, proof-of-concept test case,” he says.

Maersk, based in Copenhagen, says the goal is to collect data and “gain operational experience in a new area and to test vessel systems,” representatives from the company wrote in an email. The ship didn’t burn standard heavy fuel oil, but a type of high-grade, ultra-low-sulfur fuel. “We are taking all measures to ensure that this trial is done with the highest considerations for the sensitive environment in the region.”

Sian Prior, lead advisor to the HFO-Free Arctic Campaign, says that the best way to avoid fouling the Arctic is to ditch fossil fuels entirely and install electric systems with, say, battery storage or hydrogen fuel cells. Since those technologies aren’t yet commercially viable for ocean-going ships, the next option is to run ships on liquefied natural gas. The easiest alternative, however, is to switch to a lighter “marine distillate oil,” which Maersk says is “on par with” the fuel it’s using.

But many ships still run on cheaper heavy fuel oil, made from the residues of petroleum refining. In 2015, the sludgy fuel accounted for 57 percent of total fuel consumption in the Arctic, and was responsible for 68 percent of ships’ black carbon emissions, according to the International Council on Clean Transportation.

Black carbon wreaks havoc on the climate, even though it usually makes up a small share of total emissions. The small dark particles absorb the sun’s heat and directly warm the atmosphere. Within a few days, the particles fall back down to earth, darkening the snow and hindering the snow’s ability to reflect the sun’s radiation—resulting in more warming.

When spilled, heavy fuel oil emulsifies on the water’s surface or sinks to the seafloor, unlike lighter fuels which disperse and evaporate. Clean-up can take decades in remote waters, as was the case when the Exxon Valdez crude oil tanker slammed into an Alaskan reef in 1989.

“It’s dirtier when you burn it, the options to clean it up are limited, and the length it’s likely to persist in the environment is longer,” Prior says.

In April, the International Maritime Organization, the U.N. body that regulates the shipping industry, began laying the groundwork to ban ships from using or carrying heavy fuel oil in the Arctic. Given the lengthy rulemaking process, any policy won’t likely take effect before 2021, Prior says.

One of the biggest hurdles will be securing Russia’s approval. Most ships operating in the Arctic fly Russian flags, and the country’s leaders plan to invest tens of billions of dollars in coming years to beef up polar shipping activity along the Northern Sea Route. China also wants to build a “Polar Silk Road” and redirect its cargo ships along the Russian route.

Such ambitions hinge on a melting Arctic and rising global temperatures. If the warming Arctic eventually does offer a cheaper highway for moving goods around the world, Comer says, “then we need to start making sure that policies are in place.”