The amount of heat-trapping pollution that’s released every time Bill Williams drives his electric sedan a mile down a road here has fallen by about a quarter in the three years since he bought it.

Williams’ car hasn’t changed, but the electricity that powers it has. In Tennessee, power once generated overwhelmingly by coal has given way to more nuclear and natural gas power. With the rising number of plug-in models available in the U.S., many at increasingly affordable prices, and with electricity getting greener, the climate benefits of electric cars are growing. 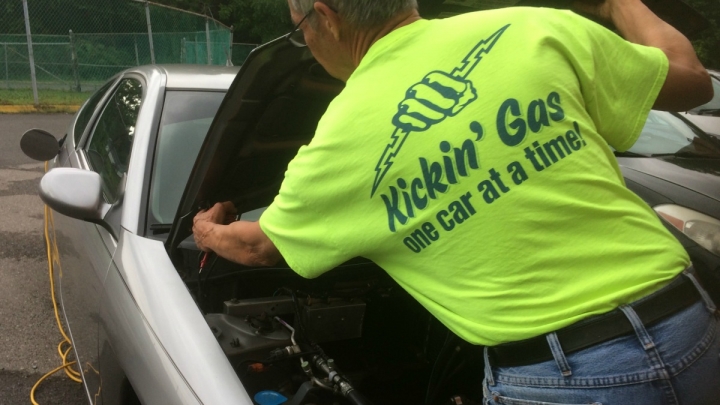 Mark Bishop opens the hood of his Honda Insight, which he converted to run on electricity. John Upton/Climate Central

Polls show that Tennesseans are among the least worried nationwide about global warming, yet they support one of America’s healthiest electric car markets. One out of every 400 new cars sold in the state in 2016 could be plugged in, Auto Alliance figures show, ranking Tennessee 11th nationwide. Electric car owners here tend to give other reasons for their purchases and view climate benefits as nice extras.

“The car of the future,” said Williams, a retired federal nuclear worker, beaming as he drove his Tesla Model S after punching the gas to show off its acceleration. “When I went and test drove it and saw it personally, I mean, I just liked everything about it.”

Analysis by Climate Central shows that at least one variety of 2017 all-electric or plug-in hybrid electric car will have a smaller impact on the climate after 100,000 miles of driving than any of its gas-fueled competitors in 37 states, including Tennessee. That’s up from 16 states in 2013, as power grids have become greener. 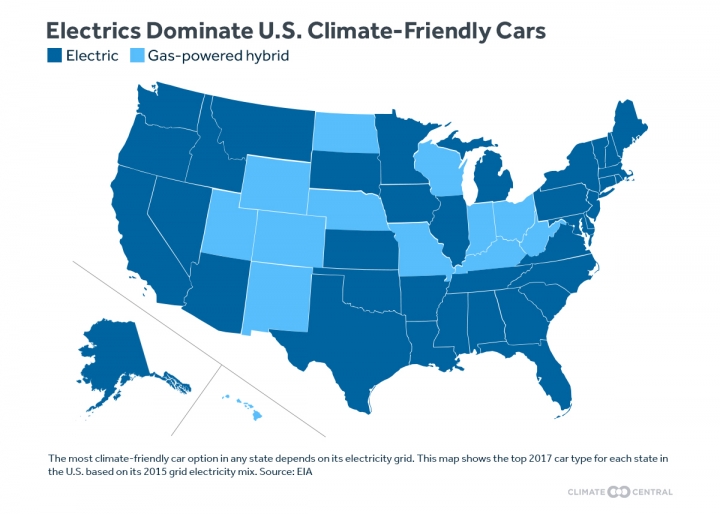 In California, the nation’s leading market for electric cars, where aggressive renewables policies have boosted the environmental benefits of the vehicles, one out of every 50 cars sold last year was a plug-in. In Alabama, which shares its northern border with Tennessee, it was one out of every 1,000.

Electric cars are only as clean as the electricity they’re charged with. Solar, wind, and nuclear power are the most climate-friendly sources of electricity, while coal is the worst. Gasoline-fueled cars are powered by oil, which is a major source of heat-trapping pollution.

Climate Central’s analysis also considered the pollution released when cars are manufactured. Because producing the battery and the rest of Williams’ Tesla released such an intense burst of greenhouse gas pollution, and because the retiree only drives 10,000 to 20,000 miles a year, it may be better for the climate if he’d held onto his 2007 Toyota Avalon, which is a relatively efficient gas-fueled sedan.

In terms of climate impacts, sometimes “it’s best to just keep driving whatever car you’re driving” — even if it burns gas, so long as it’s an efficient model, said Greta Shum, a Climate Central researcher who led the analysis. “Electric vehicles have this really high emissions rate just before they get on the road.” 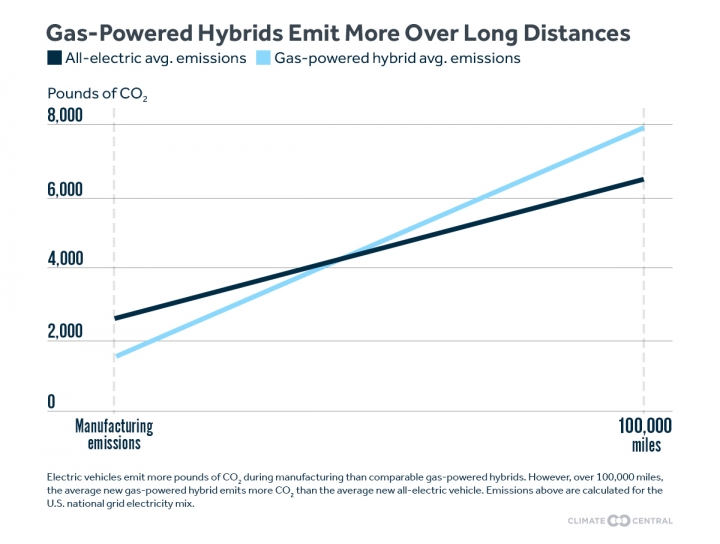 Lowering greenhouse gas pollution from electricity generation can offset those heavy manufacturing impacts. About a quarter of the electricity being sold by the Tennessee Valley Authority this year is coming from coal, down from nearly 60 percent in 2007. The authority in the fall began operating the first new nuclear power station in America in two decades, and it has been building natural gas power plants and building and buying power from solar and wind farms. Its staff have been investigating the potential impacts of electric vehicle charging on the grid as the sector grows. “What impacts there are can be managed,” said Drew Frye, a power utility engineer.

The Tennessee Valley Authority may be reducing its use of coal, but all of its power isn’t environmentally friendly. Natural gas is a fossil fuel that releases heat-trapping pollution, while nuclear power creates generations-long radioactive waste problems, and hydroelectricity also releases greenhouse gases. Just 3 percent of the authority’s power this year is coming from wind and solar power.

Still, the energy mix is environmentally friendly enough to mean that the three most climate-friendly cars to operate over 100,000 miles in Tennessee are all-electric vehicles — models made by BMW, Mitsubishi, and Fiat. In 13 other states, including Colorado, Hawaii, Kentucky, and North Dakota, heavy coal use means it’s still better for the climate to operate an efficient gas-powered model.

As their climate impacts have gone down, ownership of electric cars in Tennessee has gone up, bolstered by operations at a Nissan factory in Smyrna, a state subsidy program (which has run out of money), and efforts by local and state governments to roll out networks and corridors of public charging stations. 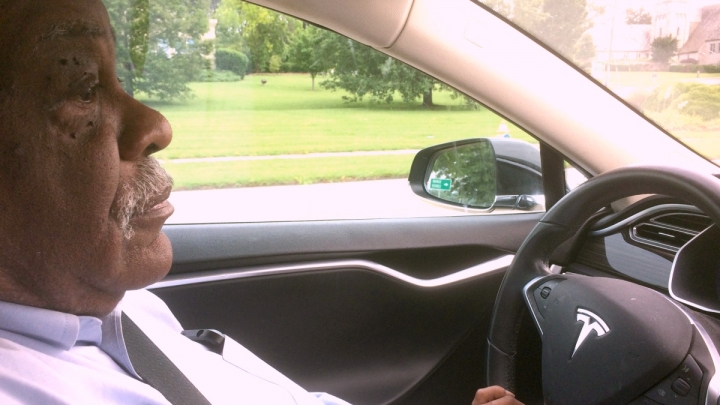 Charging stations dot major cities and line freeways between here and Nashville, helping motorists venture further from home without fear of being stranded. Some chargers were installed by local governments. Others are in the parking lots of fast food restaurants near off-ramps trying to woo customers.

“I think our role here is helping to make it possible for that whole industry to grow, and to encourage people to be those early adopters,” said Knoxville Mayor Madeline Rogero, whose staff oversees 25 public charging stations in nine locations, often at parking garages. Some 400 customers use the stations, charging their cars for an average of 90 minutes at a time. “We wanted to set an example and make them available.”

In a conservative city in a conservative state (60 percent of voters here in Knox County voted for President Trump, similar to Tennessee voters overall), Rogero was elected to her first term in 2011 after running a campaign that emphasized environmental policies. Opposition to environmental values in Knoxville has eased since 10 to 15 years ago, Rogero said, when opponents of urban planning turned out to rail at public meetings against what they saw as a United Nations conspiracy involving a sustainable development action plan called Agenda 21.

Electric car owners in Knoxville tend to point to concerns about issues other than the climate in explaining why they have embraced the technology — typically local air pollution and the effects of crude oil imports from the Middle East. The role of pollution in raising temperatures and worsening droughts, storms, and floods is a scientific fact, but discussing “climate change” is considered political and divisive in many places.

“I think it’s just common sense to a lot of people here that gas prices won’t always be low; that driving vehicles that run on American fuels is important to our security, to our safety, to our air quality,” said Melissa Goldberg, project manager at the nonprofit East Tennessee Clean Fuels Coalition. “Alternative fuels and clean transportation are a transcendent bipartisan issue.” 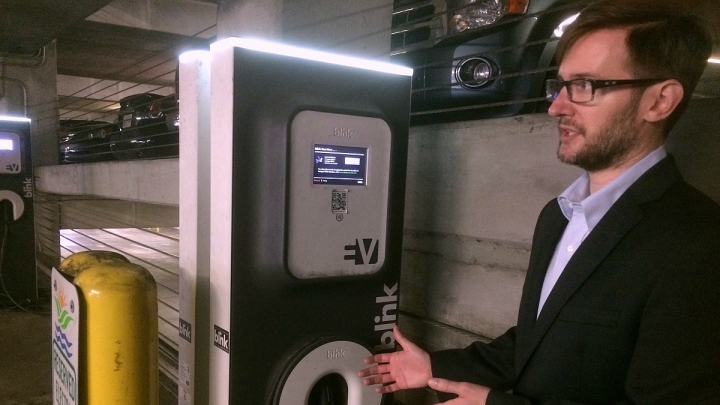 Brian Blackmon, a sustainability project manager at the city of Knoxville, at an electric vehicle charging station in a downtown parking lot. John Upton/Climate Central

Leslie Grossman converted a jeep to run on electricity in 2009 and has become a prominent advocate for electric vehicles in Knoxville. While the stockbroker acknowledges that climate change is a problem, she identifies strongly as conservative and bristles at the notion that climate concerns might motivate her.

“The reason I did it was to eliminate the imbalance in our trade and get us off fossil fuels, because they’re nasty,” Grossman said. “I chose a jeep for my conversion, because I was so tired of hearing narrow-minded people saying, ‘Electric is for wusses,’ or ‘Electric is for sissies.’”

Nissan is producing Leafs at a factory three hours west of Knoxville, helping to establish electric cars as a driving force in the state’s economy. Leafs comprise slightly more than half of the roughly 200 registered electric vehicles in Knox County — far greater than the car’s market share nationally, the Auto Alliance’s data shows. Automotive students at the Tennessee College of Applied Technology learn to repair and maintain electric, hybrid, and internal combustion vehicles.

When the students take lessons in electric vehicles, they’re learning about products that are getting cheaper as battery and other manufacturing technology improves. Although they’re still more expensive than traditional alternatives — putting them out of reach of many car buyers on smaller budgets — they can be charged for a fraction of the cost of a tank of gas.

“It depends on what you’re comparing them with,” said Williams, the owner of the Tesla Model S, which starts at $68,000 for a 2017 model. “If you’re going to get an expensive car anyway, then why not?”

While electric cars might become financially competitive over a vehicle’s lifetime with gas-fueled alternatives by next year in Europe, where gasoline is more expensive than in the U.S., UBS Financial Services projected it could take eight more years to reach similar price parity in America. Federal and some state subsidies are helping the electric vehicles compete in the meantime.

“The incentive is designed to help consumers and companies in this new marketplace, and the idea, of course, is that over time, that subsidy, which would run out, would not be necessary,” said Alan Baum, an automotive market analyst. “We’re not there yet.”

The future of incentive programs may be in peril, however. Subsidies for electric vehicles purchases have been running out of cash in some states, including Tennessee, and targeted for repeal in others. California drafted clean car standards that are more stringent than federal rules, mandating plug-in vehicle sales, which it and some other states enforce with the help of a federal waiver — a waiver that may be jeopardized under the Trump administration. Federal subsidies could run out for some manufacturers next year, though Congress is considering extending them.

Oscar Smith, an Audi seller in Knoxville whose some 300 sales last year included three e-tron plug-ins, said subsidies are key for making electric cars more appealing. He also said they come with a “cool factor” that can help with sales.

“I see it as the next evolution in automobiles,” said Richard Thigpen, a doctor in Knoxville who has leased a BMW i3 since 2014. Caring for the environment “wasn’t my primary motivation” in going electric, he said, but he wanted a car that could be fueled with American energy. Most of the coal and gas burned in the U.S. is mined or drilled domestically.

“I really like the cool factor,” Thigpen said. “I’m an early adopter — I like what’s new, and it’s just fun to drive.”

“Resistance as daily existence”: One woman’s story as a climate scientist under Trump