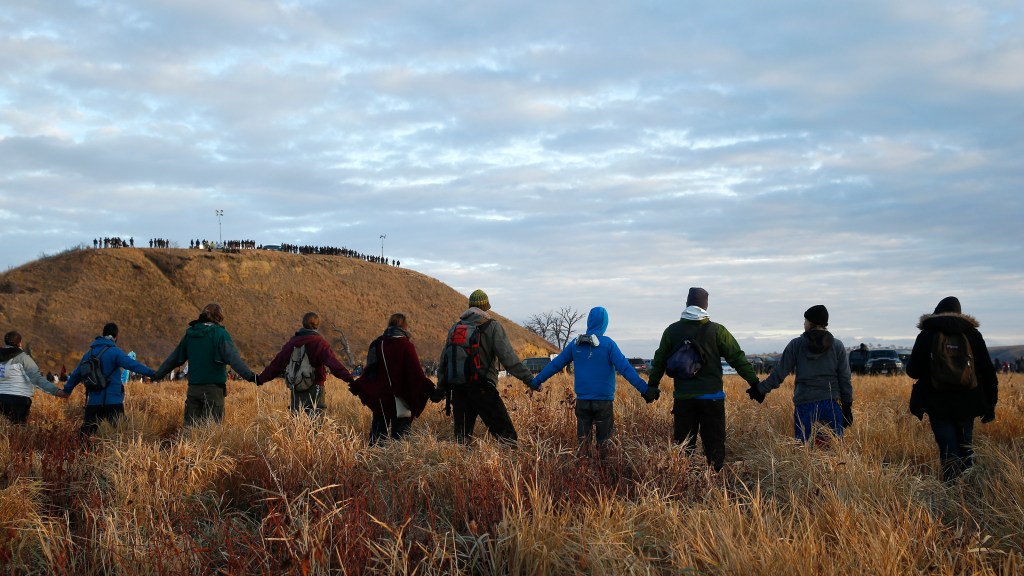 The fight against a Texas pipeline just got a little more challenging. On Monday, the Texas Senate passed legislation that makes interfering with pipelines and other oil and gas infrastructure a crime punishable by up to a year in prison and $10,000 in fines. And just the “intent to impair or interrupt” operations could still cost you a $4,000 fine and a year behind bars.

The new legislation raises the risk for landowners hoping to block construction of Kinder Morgan’s $2 billion, 430-mile natural gas pipeline from West Texas’ Permian Basin to the Gulf Coast. The proposed project would cut through the Hill Country, an ecologically sensitive 25-county region in Central Texas that is home to the endangered golden-cheeked warbler.

As oil and gas production booms in the Permian Basin in West Texas, companies have been rushing to build pipelines across the state. Kinder Morgan’s Permian Highway pipeline is currently the most prominent pipeline project in the state and has faced tremendous opposition from landowners who stand to have their property seized due to state law that grants private, for-profit companies the power of eminent domain. Residents are also concerned about groundwater contamination, as the project would come very close to Hill Country aquifers, one of which is the source of 80 percent San Antonio’s drinking water.

“It’s a pity that policymakers are continuing to protect the dirty fossil fuel industry and there are higher fines for chaining yourself to a fence than a company gets for poisoning the water with benzene,” said Jennifer Falcon, campaign manager for the Society of Native Nations. She called the legislation “a fear tactic to dissuade environmental justice movements.”

Since protests at the Standing Rock Indian Reservation against the Dakota Access Pipeline captured national attention in 2016, five states have enacted laws laying out harsh penalties for protesting so-called “critical infrastructure” — facilities such as pipelines, compressor stations, refineries, and wastewater treatment plants. At least seven other states are considering similar legislation. Laws in South Dakota are already being challenged in court and a similar legal pushback appears imminent in Louisiana, where at least 16 people have been arrested under one such law.

Meanwhile, in Texas, the state Senate passed its own anti-pipeline protest legislation 27-4 on Monday, with eight Democrats also supporting it. The House has already passed a version of the bill but will need to vote again on the Senate version, which has lighter penalties than the House bill. From there, it will head to Republican Governor Greg Abbott’s desk, where he is likely to sign it into law.

The bill’s sponsors have claimed the bill will not limit the ability of Texans to protest or picket.

“What this does is similar to what Oklahoma and Louisiana have done, is provide a disincentive to act beyond your First Amendment protest rights and begin damaging [infrastructure],” said Texas Senator Brian Birdwell, a Republican representing Dallas-Fort Worth and a sponsor of the bill on the Senate floor Monday. “If you go past the peaceful protest, then this act is operative.”

The legislation is similar to model bill language published by the American Legislative Exchange Council, a conservative nonprofit backed by the Koch Brothers. The author and sponsor of the bill in both the House and Senate have ties to ALEC, according to the Center for Responsive Politics. Senator Birdwell and Texas House Representative Chris Paddie attended ALEC conferences in 2012 and 2016, respectively.

The bill has garnered overwhelming support from the oil and gas industry. In an email statement, Todd Staples, president of the industry group Texas Oil and Gas Association, said it is “badly needed because, unfortunately, we have seen too many examples of illegal activity that is costly to Texas businesses and local governments and puts employees of these facilities in danger, as well as endangering local law enforcement who respond.”

But environmental and labor groups oppose the legislation because they say it overly criminalizes regular protest activity. The Senate version of the Texas bill penalizes people who trespass “with the intent to damage or destroy the facility or impair or interrupt the operation of the facility.” The bill also makes organizations that “compensate” protesters liable for damages.

“A company could say, ‘By being on this property you’re interfering or impeding with operations,’ and that would be a misdemeanor,” said Robin Schneider, executive director of Texas Campaign for the Environment, a nonprofit group.

Opponents of the Texas legislation succeeded in watering it down: An earlier version of the bill punished trespassers who interfered with oil and gas operations with felony charges on par with indecent exposure to a child. An amendment filed by Democratic Senator Juan Hinojosa downgraded the penalty to a misdemeanor, which is still punishable with up to a year in prison and a heightened penalty of $10,000 in fines.

Falcon from Society of Native Nations said the bill will have a disproportionate impact on indigenous communities and people of color. She cited a recent United Nations report that found extinction patterns in ecosystems protected by indigenous communities were less severe. “The data is there that we have been protecting ecosystems and our Earth while everybody else is turning a blind eye,” she said.

Falcon said her group plans to challenge the law in court. “We’re going to fight this in the higher courts and we will make sure that we protect our constitutional rights,” she said.