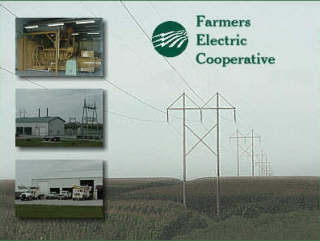 It may be one of the oldest cooperative utilities in the country, but in the next six months, Farmers Electric Cooperative (FEC) of southeastern Iowa will be leading the nation in this 21st century energy source. Upon completion of a new solar array, the 640-member cooperative will have over 1,500 Watts of solar per customer on their system, nearly double the #2 utility. It’s also the most reliable utility in Iowa. How can a small, member-owned utility be “America’s Most Progressive Utility“?

Find out in this interview with FEC Manager Warren McKenna, recorded via Skype, on November 18, 2013.

Unlike many small cooperative or municipal utilities, Farmers Electric Cooperative only buys 30% of its energy on long-term contracts. Instead, McKenna explains, they buy power on the spot market, using local power generation and demand management to avoid price spikes. This leaves them open to buying power from local generators, especially solar.

FEC hasn’t limited itself to just one strategy for adding solar to the grid. In fact, they don’t even have net metering, the most common policy for connecting small-scale solar projects.

Instead, they have a feed-in tariff at pays 20¢ per kilowatt-hour (kWh) for solar energy, as long as it’s 25% or less of a customer’s own use. For solar energy produced that is between 25 and 100% of a customer’s monthly usage, customers still get 12.5¢ per kWh (the retail electricity rate for residential customers). Surplus generation is purchased by the utility at 6¢ per kWh.  Participating customers still buy all their electricity from the utility

FEC also has a 25 kW community solar project, selling shares to new customers in phase 2 for just $1.63 per Watt. Current participants can buy additional panels for $2 per Watt.

Finally, the cooperative has also commissioned a new 750 kW solar array which will sell power to the utility for its first 10 years, and the revert to cooperative ownership thereafter.

Since it’s a cooperative, technically every FEC member is an owner in a local solar project. But ignoring that for the moment, about 20% of the cooperative’s members either have their own solar array, own shares in the community solar project, or participate in the Green Power Project (a $3 per month green pricing program for purchasing local renewable energy).

The big question is, could your local utility do what Farmers Electric is doing?  If your utility happens to be locally owned, says McKenna. Cooperatives are often very open to comments from their members, and if not, you can run for the board.  Municipal utilities are overseen by elected officials, who are always looking for examples of strategies to increase local jobs, particularly from clean energy.

It’s inspiring to see what FEC has accomplished, regardless.  Most of the greenest utilities in the U.S. are among the largest, and Farmers Electric shows that you don’t have to be a big utility to do big things with locally owned renewable energy.

This is the 12th edition of Local Energy Rules, an ILSR podcast with Senior Researcher John Farrell that shares powerful stories of successful local renewable energy and exposes the policy and practical barriers to its expansion. Other than his immediate family, the audience is primarily researchers, grassroots organizers, and grasstops policy wonks who want vivid examples of how local renewable energy can power local economies.