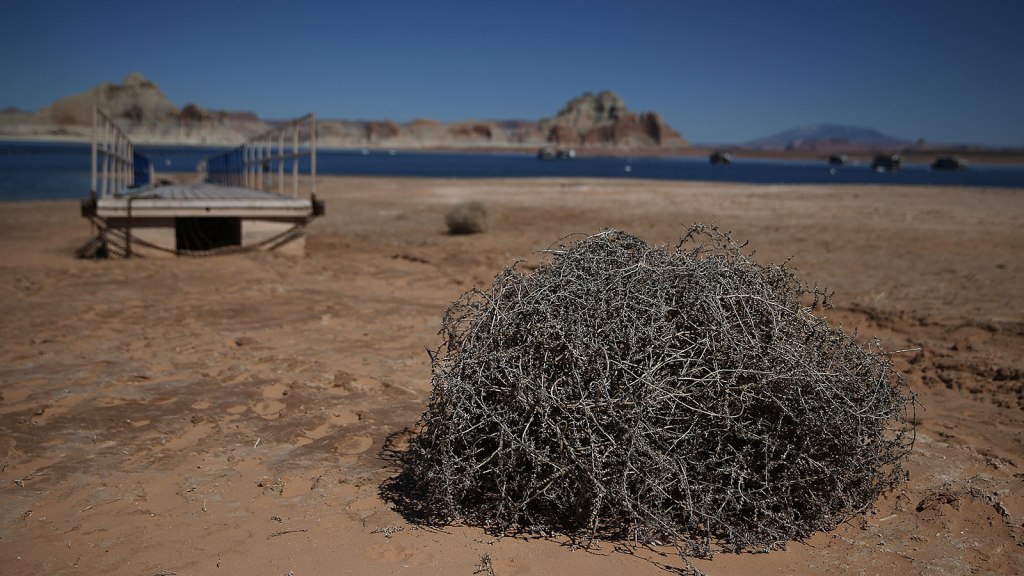 For the first time in history, low water levels on the Colorado River have forced Arizona, Nevada, and Mexico to cut back the amount of water they use. It’s the latest example of climate change affecting daily life, but also an encouraging sign that people can handle a world with less: These orderly cutbacks are only happening because seven U.S. states and Mexico had agreed to abide by conservation rules when flows subside, rather than fight for the last drops.

“It is a new era of limits,” said Kevin Moran, who directs the Environmental Defense Fund’s Colorado River efforts.

The Colorado River is a vital source of water for the American West, sustaining some 40 million people and 5.5 million acres of farmland. And it’s been under enormous stress. Since 2000, the watershed has been, to put it mildly, dry. The region is suffering the worst 20-year drought in modern times.

A Bureau of Reclamation study of Colorado River levels, released Thursday, triggered the cutbacks. The Rocky Mountains finally turned white with heavy snow last winter, but despite a galloping spring runoff, drought persists and bathtub-ringed reservoirs in the Grand Canyon are low. In its study, the Bureau highlighted the unique circumstances: “This 20-year period is also one of the driest in the 1,200-year paleo record.”

Rising temperatures brought on by rising carbon emissions are partly to blame. “Approximately one‐third of the [Colorado River] flow loss is due to high temperatures now common in the basin, a result of human caused climate change,” wrote scientists Brad Udall and Jonathan Overpeck in a study published in 2017 that anticipated water will only become scarcer in the future.

But these water-use reductions are also an example of people binding themselves to rules to deal with scarce resources, rather than going to court, or war. The cutbacks come from an agreement hammered out by the Southwestern states and Mexico to impose limits on themselves.

“It’s not necessarily well known or talked about, but this collaboration between the states and Mexico is one of the most successful cross-border water management stories in the world,” Moran said.

Over the long course of history, the various parties have fought each other over water, but found that cooperation simply works better, Moran said. By working together, they’ve already managed to reduce the amount of water drawn for the last five years from the lower Colorado River Basin. In fact, they’ve cut back more in each of those years more than required by their agreement in 2020, said John Fleck, the director of the University of New Mexico Water Resources Program, who wrote the book Water is for Fighting Over, on the history of conflicts over the Colorado River.

“It puts the lie to the idea that water use is just going up and up and up: It’s been on a downward trend for a decade and a half at a time when population is increasing and agriculture is as productive as ever,” Fleck said. “We’re beyond the Malthusian math that suggests we’re going to run out of water and die.”

The region will need to go further to keep up with climate change and refill reservoirs, Fleck said. But the progress so far leaves him hopeful that people can resolve conflicts over scarce resources in this new era of limits.

“The key, I think, is for the water users to realize that you can have healthy, successful communities with declining water,” Fleck said. That opens up the space for collaboration, and allow them to get beyond the old myth that water is for fighting over.”