There are price-tag stickers all over the floor of Pablo Delcan’s office. I imagine a galaxy of stars in blue, green, yellow, and orange. There are even some stickers on his keychain. “I don’t know how they ended up there,” the artist tells me over the phone.

To help you crack the mystery, here’s a clue: Delcan recently designed a flaming Earth for the cover of this Sunday’s New York Times Magazine. The image is collaged out of price-tag stickers.

The issue, called “Putting a Price on the End of the World,” features several articles on the economics of climate change. “It felt almost obvious that it would be like putting a [price-tag] sticker on something,” Delcan said.

Obvious in hindsight, maybe. The New York-based designer said he sent the magazine a range of about 30 different directions for the cover before landing on the price-tag concept.

To make the cover art, Delcan found a store that specialized in price tags — yes, apparently that exists. “The colors are just so vibrant and captivating,” he said. “They’re sort of designed to call attention.”

Climate change has a reputation for being notoriously tough to illustrate. You have images of protesters, your classic stranded polar bear, or power plants spewing dirty air — but nothing quite captures the scope or scale of the problem.

So it makes sense that the Times enlisted Delcan for the job. “They normally turn to me when they’re in need of a conceptual cover,” Delcan said. In November, he created a cover for a design and tech issue exploring the idea of “the human of the future.” The image depicts a robot arm holding a human skull in its hand.

Originally from Spain, Delcan worked on book covers for his first job out of college. He’s illustrated 11 covers for NYT Mag since they first gave him the chance a couple of years ago. 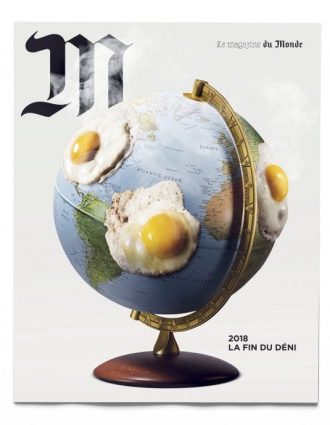 This isn’t his first cover on climate change for a magazine. Last year, he designed one for a special global warming issue for the French Le magazine du Monde. The concept: a globe covered in fried eggs, which conveys “this terrifying idea that it could get so hot you could fry an egg on it.”

He also designed a book cover for Swedish environmentalist Andreas Malm’s The Progress of this Storm: Nature and Society in a Warming World, which takes shattered glass–like images of a stormy ocean and mosaics them together.

Delcan’s secret sauce for making climate change art fresh? A quantity of ideas. He says he did dozens of sketches for the new issue before sending in his ideas: “It’s a meditation-like process, trying to get the one idea that will explain everything.”