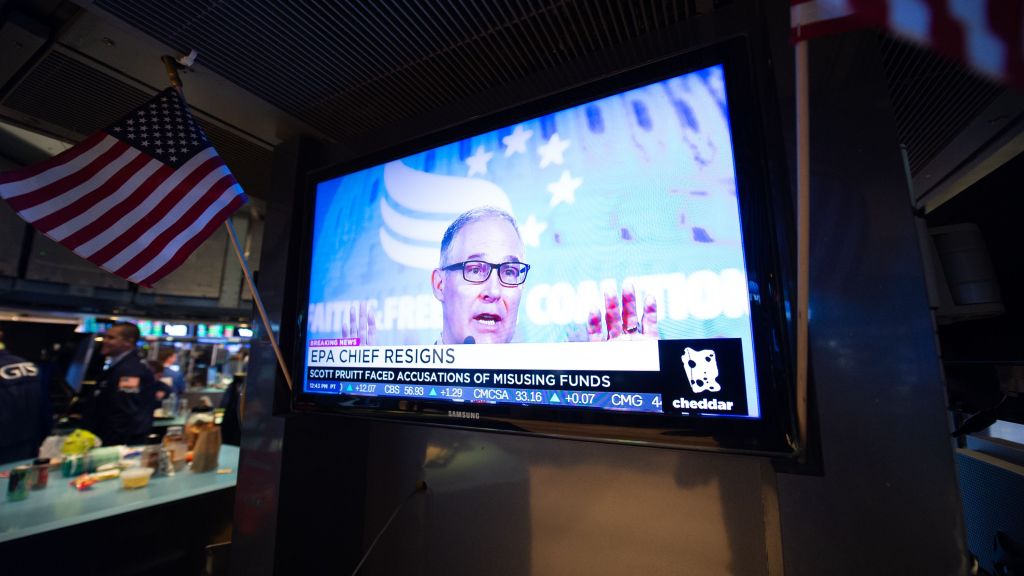 When Mother Jones first reported in December 2017 that the Environmental Protection Agency had hired a hyperpartisan GOP opposition research firm known for its aggressive tactics to handle the agency’s news-clipping work, the politically appointed flacks in the agency’s press office insisted the decision was about saving money and that the hiring had been handled through normal procurement channels. As we reported Thursday, we now know that was not the case. Internal emails obtained through the Freedom of Information Act show that political appointees in the EPA press office demanded that career staff push through the hiring of Definers Public Affairs — best known for its work for Republican campaigns and recently for its role as Facebook’s attack dog on Capitol Hill, which included attempts to smear George Soros for his critiques of the social-media network.

Now, thanks to another batch of internal emails, we have even more evidence that the motivation for hiring Definers came from the top agency political appointees who were ticked off at the old service because it was collecting too many news clips that portrayed then-EPA Administrator Scott Pruitt negatively.

News clipping services are used by public relations offices both inside and out of the government to help keep track of the wide constellation of media outlets that might be talking about a topic of interest. The product they create — usually a roundup of headlines or excerpts — is an internal document designed to keep those inside the agency informed about press coverage. Liz Purchia, a press staffer in Obama’s EPA, noted that “cherry-picking the clips so you only saw the good ones” isn’t typically done, because it “doesn’t give you a realistic picture.” The collection of clippings is not usually publicly distributed.

But according to the new batch of emails, also obtained through FOIA, top EPA political staff were sick of the previous news clipping service’s propensity to include headlines that tended to make the controversial new appointee, who brought to the EPA a Rolodex of industry connections, look bad.

“Is it necessary to include all the negative headlines that go out to everyone?” complained Samantha Dravis, the agency’s associate administrator for policy, in a March 17, 2017, email to John Konkus, who now leads the EPA’s press office. “I could care less what Al Gore thinks about Scott Pruitt’s position — why is that news?? Who puts this together?”

Dravis, who previously had worked as general counsel for the Republican Attorney General’s Association, which Pruitt had run before coming to Washington, was objecting to the inclusion of a link to a PBS News Hour interview with former Vice President Al Gore from the night before, in a daily news roundup.

Konkus, who had previously worked at Republican consulting firm Jamestown Associates, replied that he agreed and that this was an ongoing problem with the news clipping service at the time, a Virginia-based company called Bulletin Intelligence that had provided news clip roundups to the EPA and a number of other federal agencies for several years.

“We had them on the phone about a week ago complaining about the tilt and they said they would change,” he wrote. “They haven’t.”

Don Benton, a White House senior adviser to the EPA, forwarded the whole chain of complaints to his counterpart at the Department of Homeland Security, a political operative named Frank Wuco. A former military consultant, Wuco once created an alter-ego Islamic terrorist character that he featured in videos and as a host for radio shows in which he warned of the danger of Islamic extremism. Benton told Wuco that a scientist had told him that Bulletin Intelligence disseminates “fake news” and suggested Wuco “look into it.” The email was sent to Wuco’s private email address. Wuco’s reply, if any, was not included in the FOIA materials.

Neither Wuco nor Benton replied to a request for comment on the email exchange.

This was early in the Trump administration, but the aggressive and overtly partisan strategy eventually carried over into the EPA’s public operations. The EPA generated even more negative headlines for itself by blocking reporters from events, trying to plant negative stories about EPA reporters in conservative outlets, scripting interviews with Fox News, and calling reporters names, like when then-spokesperson Jahan Wilcox called a reporter a “piece of trash.” The EPA’s spending on Pruitt’s travel, his security, and his soundproof phone booth were already under scrutiny when the EPA approved a contract with Definers.

Charles Tiefer, a professor of contract law at the University of Baltimore, told Mother Jones: “One of the main reasons that we have a corps of career government contract personnel is to keep the political people away from giving the taxpayer money out to political cronies.”