The first wintertime megafire in California history is here 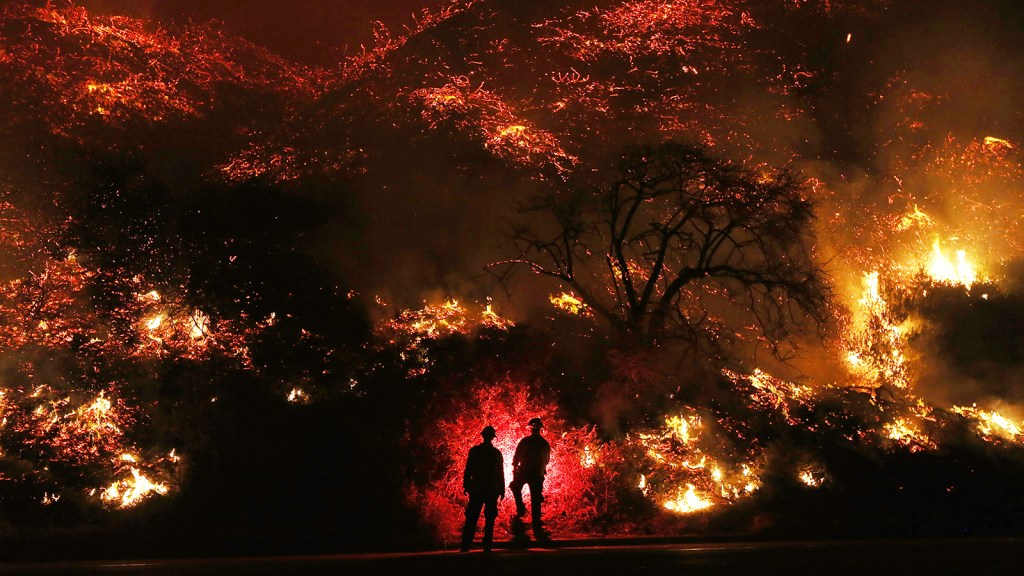 The first wintertime megafire in California history is here

In the hills above the Pacific Ocean, the world crossed a terrifying threshold this week.

As the largest of this week’s fires skipped across California’s famed coastal highway 101 toward the beach, rare snowflakes were falling in Houston, all made possible by a truly extreme weather pattern that’s locked the jet stream into a highly amplified state. It’s difficult to find the words to adequately describe how weird this is. It’s rare that the dissonance of climate change is this visceral.

That one of California’s largest and most destructive wildfires is now burning largely out of control during what should be the peak of the state’s rainy season should shock us into lucidity. It’s December. This shouldn’t be happening.

The Thomas fire is the first wintertime megafire in California history. In a state known for its large fires, this one stands out. At 115,000 acres, it’s already bigger than the city of Atlanta. Hundreds of homes have already been destroyed, and the fire is still just 5 percent contained.

In its first several hours, the Thomas fire grew at a rate of one football field per second, expanding 30-fold, and engulfing entire neighborhoods in the dead of night. Hurricane force winds have produced harrowing conditions for firefighters. Faced with such impossible conditions, in some cases, all they could do is move people to safety, and stand and watch.

“We can’t control it,” firefighter and photographer Stuart Palley told me from a beach in Ventura. “In these situations, you can throw everything you’ve got at it, tanker planes dropping tens of thousands of gallons of flame retardant, thousands of firefighters, hundreds of engines, you can do everything man has in their mechanical toolbox to fight these fires and they’re just going to burn and do whatever the hell they want. We have to learn that.” As we spoke, another wall of flames crested a nearby ridge, reflecting its orange glow off the sea.

The Thomas fire isn’t the only one burning right now. At least six major fires threaten tens of thousands of homes and have forced hundreds of thousands of people to flee in recent days. “California fires enter the heart of Los Angeles” read one New York Times headline, a statement so dire it could double as a plot synopsis in a nearby Hollywood movie studio. Million-dollar mansions in Bel Air were evacuated, and the 405 freeway, one of L.A.’s busiest, was transformed into a dystopian hellscape during the morning commute. Ralph Terrazas, the Los Angeles fire chief, called the conditions the worst he’s seen in his entire 31-year career. “There will be no ability to fight fires in these kinds of winds,” said Ken Pimlott, the state fire chief. Shortly after these statements, state officials sent an unprecedented push notification to nearly everyone in Southern California, ominously warning millions of people to “stay alert.”

For years, climate scientists have warned us that California was entering a year-round fire regime. For years, climate campaigners have been wondering what it would take to get people to wake up to the urgency of cutting fossil fuel emissions. For years, we’ve been tip-toeing as a civilization towards a point of no return.

That time is now.

The advent of uncontrollable wintertime megafires in California is a turning point in America’s struggle to contain the impacts of a rapidly changing climate. Conditions that led to the Thomas fire won’t happen every year, but the fact that they’re happening at all should shock us.

As California-based scientist Faith Kearns writes in Bay Nature magazine, “The admission that our best efforts may not always be enough opens a small window to shift how we think about disasters.”

The sirens are wailing, the long-feared scenarios are coming true. The era that scientists have warned us about for decades is here. There’s no denying the facts anymore: What’s happening right now in California is a climate emergency.

Historically, the Santa Ana fire season in Southern California peaks in October, at the end of the long summer dry season, just as the first snows of the winter start to appear in the Sierras. With the right conditions, the dense, cold air further inland gets funneled toward the coast, warming and drying as it quickly descends toward the sea, waiting to transform an errant spark into a raging inferno.

These are the Santa Ana winds, and they’ve been happening here for millennia. What’s different now, of course, is there are millions of people living in the area, for all the reasons people want to live in Southern California. The seasons are changing, too. Increasingly, those two facts are becoming incompatible.

There’s a whole series of links between climate change and this week’s fires. Ten years ago, scientists warned of possible lengthening of the Santa Ana fire season, and the data bear that out. Fire season is more than a month longer now, and 13 of the state’s top 20 fires in history have happened since 2000. This year’s “rainy” season has also been suspiciously absent so far, with Los Angeles rainfall 94 percent below normal since October. Right now, the atmosphere over the West Coast is the driest in recorded history. There’s no rain in the forecast for at least the next two weeks – the current fires could last until Christmas. Combine that with more people wanting to live in harm’s way – more than a million more people live in Southern California compared to 2000 – and it’s no wonder wildfire seasons are becoming increasingly catastrophic.

This year was the most expensive wildfire season in U.S. history, but money isn’t really the issue here. It’s the daily terror that fills residents as they look up and see a blood red sky and wonder if their home will make it through the night. It’s the rush on breathing masks as air pollution values spike above the top of the scale. It’s the realization that what you thought was normal, isn’t anymore.

In Houston, Puerto Rico, and Los Angeles, Americans are feeling the urgency of climate change not in weather data and distant news reports, but in their pulse rate.

Climate change is no longer some abstract concept, some line on a graph, some strongly-worded scientific consensus statement. Climate change is terrifying. It’s families fleeing a fire with only a moment’s warning to collect their photo albums. It’s single mothers using an ax to break a hole in the roof of their house as floodwaters rise into the attic of their home in the backyard of the oil industry’s capital city. It’s an entire island destroyed and forgotten, buried in a frenetic news cycle.

A new study this week that examines the recent performance of climate models, provides a hint that the ones showing the quickest rise in global temperatures have generally been the most accurate so far. Increasingly, that rise will accelerate, say the models, unless the world institutes a sharp reduction in emissions. Should we continue on a business as usual pathway, the new findings show a 93 percent chance that global warming will exceed what was previously considered a worst-case scenario by 2100.

A baby alive today has a good chance of living to the year 2100. The people of the future are real people, you can already meet them. Their climate futures are increasingly tangible. That climate change is now a California emergency doesn’t necessarily fate the region to uninhabitability, it provides an opportunity for a radical rethink. If we bungle this opportunity, all indications are that things can definitely get a lot worse.

A version of this story originally appeared in Rolling Stone.