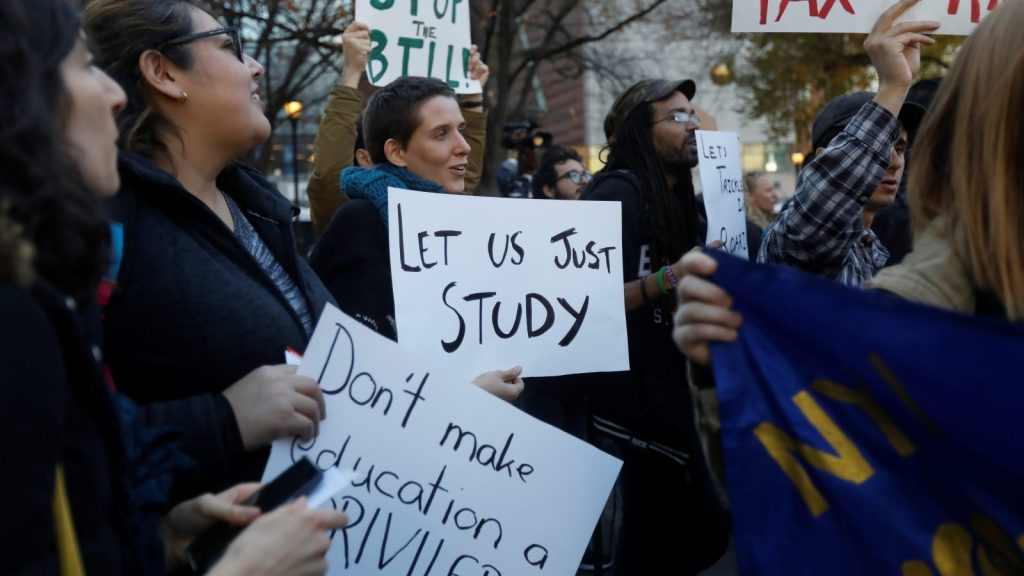 Grad students around the country are protesting the so-called grad student tax. Of course they are! They stand to lose thousands of dollars. But even if you’re not an aspiring PhD, the tax is cause for concern: It could hurt scientific research, leaving us less capable of tackling climate change.

In the environmental sciences, like many STEM fields, universities offer graduate students a stipend and cover their tuition in return for teaching or conducting research. The House tax bill approved in November would start treating tuition as taxable income. The Senate version keeps tuition waivers tax-free, but it’s unclear whether the tax will be part of the the final bill that reconciles the two versions.

More than half of grad students make $20,000 or less a year, according to stats from the Department of Education. Paying an extra few thousand dollars in taxes could make grad school unaffordable for many, and economists say it would discourage people from seeking advanced degrees. Professors and grad students in the environmental sciences told me that the tax would decrease the diversity and number of students in their programs, and could ultimately devastate climate change research.

“The worry is that if this passes — and then the other attacks on funding within the federal government for climate science — then we’re going to lose a generation of climate scientists,” LuAnne Thompson, professor of oceanography at the University of Washington (UW), said in an interview with Grist.

Graduate students are the muscle behind the research force, often making up the majority of researchers in a lab. They plan experiments, acquire data, and publish articles about the results.

“I feel like people are underestimating what it would mean for there to be fewer grad students,” says Natalie Lowell, a PhD student at UW’s School of Aquatics and Fishery Sciences. “It really is a direct correlation with how much less research there’s going to be.”

Lowell, who researches native shellfish species, says that she has to live fairly frugally to get by on her stipend. She lives in a basement apartment where squirrels “come out of the wall” and pee everywhere. In Seattle, where the tech boom has caused rent to skyrocket, this “absolute steal” costs $500 a month. She’s been saving up a couple thousand dollars a year, but she wouldn’t be able to do so under the tax. It would knock about $3,600 out of her bank account each year she’s in school.

For in-state students at UW, taxes would increase from roughly $2,700 to $4,200 a year, according to Matt Munoz, a graduate student studying public administration and policy at UW. Out-of-state students would be charged nearly $5,800.

The tax provision would be bad timing, since it could sabotage the efforts in diversity, equity, and inclusion that were finally picking up speed at UW. Thompson, the oceanography professor, says that the extra cost could make it impossible for people with limited resources to participate in College of Environment graduate programs.

“The way we think about conservation science has really shifted” as it has become more inclusive, UW’s Lowell says. “[The tax] is the sort of thing that would just throw a wrench in that. Because who’s doing the research totally determines how you frame questions, how you make connections, how you treat your workers.”

By limiting who can participate in graduate research, the grad student tax could stifle scientific innovation, similar to Trump’s travel ban. It could also make education prohibitively expensive for many international students, potentially sending some of the world’s brightest minds to other countries.

Marysa Laguë, a student from Canada pursuing a PhD in atmospheric science at UW, pays taxes in both Canada and the United States. She told me that she always has the “fallback plan” of going back to her home country if staying in grad school in Seattle becomes too expensive. “I don’t want to have to do that,” she says. “I’m here for a reason. I wanted to be here.”