The Green New Deal is here, and everyone has something to say about it 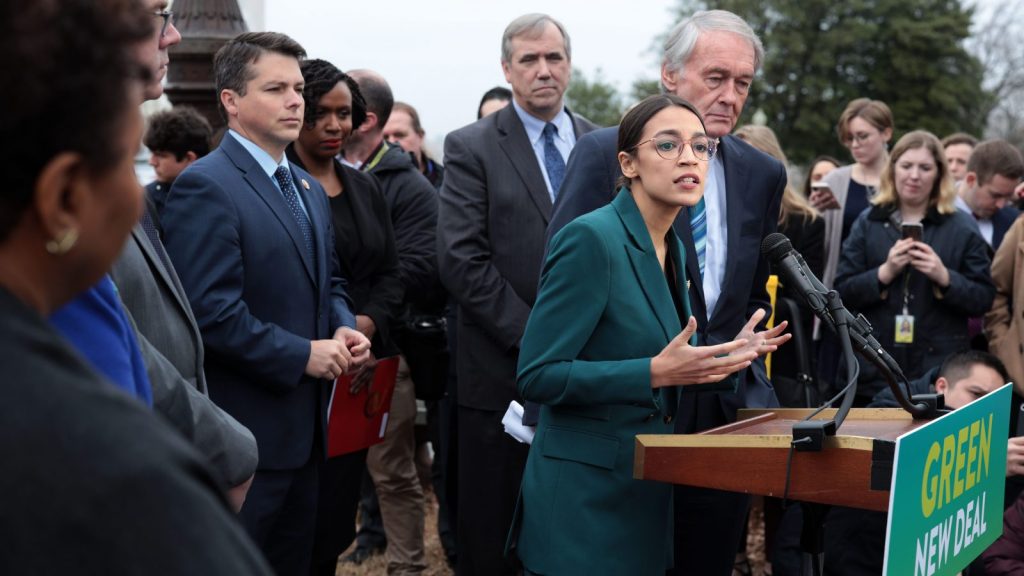 The Green New Deal is here, and everyone has something to say about it

For the past several weeks, there’s been rampant speculation about what would be included in the much talked about Green New Deal, the ambitious plan to tackle climate change and remake much of the American economy. That anticipation came along with trepidation from some corners over whether the deal would include controversial elements that have already led to heated debate. Will a future bill include a jobs guarantee? Will nuclear energy be part of our energy mix of the future? Will it fold in universal healthcare?

Well, the nail-biting can stop now that there’s an outline of the plan to chew on. Representative Alexandria Ocasio-Cortez and Massachusetts Senator Ed Markey’s resolution arrived Thursday morning.

“Today is a really big day, I think, for our economy, the labor movement, the social justice movement, indigenous peoples, and people all over the United States of America,” said Ocasio-Cortez, who represents parts of Queens and the Bronx, at an introductory press conference. “Today is the day that we truly embark on a comprehensive agenda of economic, social, and racial justice in the United States of America.”

Early indications are the plan has managed to thread the needle and get a lot of folks in the environmental movement on board — even those who might have been wary about what the proposal would entail.

The Peoples Climate Movement quickly offered its endorsement. The coalition’s diverse membership includes labor, green groups, environmental justice advocates, and activists — including Sierra Club, Service Employees International Union, and Indigenous Environmental Network. Getting all of those organizations in agreement is easier said than done; each has its own priorities and strategies for combating climate change.

“The Peoples Climate Movement has worked over the last four years to align different sectors of the progressive, labor and environmental movements,” said National Director Paul Gestos in a statement. “While many of our partners are assessing the legislation for strengths, weaknesses, and areas for improvement — and we know that much work lies ahead — the Peoples Climate Movement is proud to support this important first step toward a real climate solution.”

One of those groups that is assessing Ocasio-Cortez and Markey’s offering is the Climate Justice Alliance, which had signaled that it would not support any proposal that allowed for the continued use of nuclear energy or adoption of schemes or technologies, like carbon pricing and carbon capture, that it sees as potentially extending our reliance on fossil fuels.

The just-released resolution calls for “meeting 100 percent of the power demand in the United States through clean, renewable, and zero-emission energy sources.” In lieu of a totally carbon-free economy, it sets up a net-zero one, where carbon emissions are canceled out — leaving on the table both nuclear and dirty energies outfitted with carbon-capture mechanisms. The resolution is also vague on pricing and the “costs” of emissions.

“The resolution is silent on any individual technology,” Senator Markey said during a press conference Thursday. “We are open to whatever works.”

In response to the resolution, Angela Adrar, executive director of the Climate Justice Alliance, wrote to Grist, “The Climate Justice Alliance welcomes the bold Green New Deal initiative from Rep. Alexandria Ocasio-Cortez and other Members of Congress; to truly address the interlinked crises of a faltering democracy, growing wealth disparity, and community devastation caused by climate change and industrial pollution, we must reduce emissions at their source.”

The bipartisan Citizens Climate Lobby, which has pushed hard for a price on carbon, said in a statement that while it shares the goal of “a swift transition away from fossil fuels.” It favors measures that could garner support from both sides of the aisle in a divided Congress. “The private sector can do much of the heavy lifting with this transition if it has the proper motivation, like a robust price on carbon,” said executive director Mark Reynolds.

Meanwhile, former Vice President Al Gore hailed the resolution as “ambitious and comprehensive” — but added that it’s only a first step. “Now the work begins to decide the best ways to achieve them, with specific policy solutions tied to timelines,” Gore said in a tweet.

There will no doubt be some hiccups moving forward. Aside from the debate over what the right energy mix should be, the resolution as it stands includes language promoting a jobs guarantee, universal healthcare, and housing for all — all topics that could rankle conservatives and even some moderates. Trying to get those kinds of federal guarantees to pass through Congress is a moonshot to say the least.

While politicians might differ in their responses to the resolution, its language centers on inclusivity, attempting to incorporate putting people first as part of the mainstream environmental agenda. The outline states up front that a Green New Deal must not only “promote justice and equity” but also seek to repair harm and prevent future injury to those most vulnerable to climate change and the fossil fuel economy — namely communities of color, indigenous peoples, migrants, rural communities, the poor, people with disabilities, the elderly, and young people.

Ocasio-Cortez worked closely with the youth-led environmental organization Sunrise Movement to craft the Green New Deal deal and whip up interest in it. Through a series of sit-ins and other actions, the activist group chased down Democratic politicians to win support for the plan. The tactic seems to have worked: The Guardian reported that 60 House members and 9 senators are co-sponsoring the resolution. That includes presidential hopefuls Corey Booker, Kirsten Gillibrand, and Elizabeth Warren.

“In 2018, young people put the Green New Deal on the national agenda,”Varshini Prakash, founder and executive director of Sunrise (and a Grist 50 alumna) wrote in a statement. “The historic support for this resolution, especially among 2020 contenders, shows how far the movement has shifted the political conversation.”