You've tried 'meatless' sausage, but would you go for 'beanless' coffee? 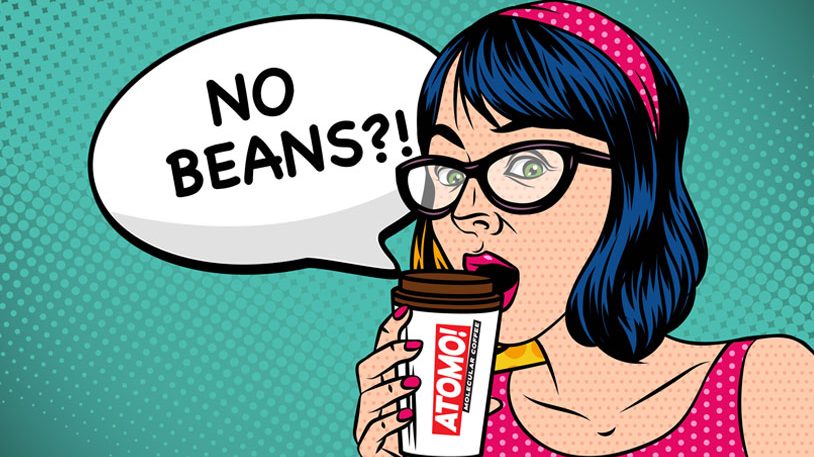 You’ve tried ‘meatless’ sausage, but would you go for ‘beanless’ coffee?

You’ve heard of meatless meat and milkless milk. But what about — don’t read this while pulling an espresso shot, lest you burn it in shock — beanless coffee? Well, folks, it’s here, and Atomo Coffee’s founders say it’s more sustainable and better-tasting than the real thing.

Their version, dreamed up by co-founder and food scientist Jarret Stopforth, is akin in some ways to lab-grown meat: Seattle-based Atomo maps coffee’s molecular makeup and recreates it using many of the same compounds, derived from secret but supposedly more sustainable sources. Notably absent in the current prototype: the sources of coffee’s acidic, bitter flavors. Bean me up, Scotty!

I can hear you now: “Your scientists were so preoccupied with whether or not they could, they didn’t stop to think if they should.” First of all, NERD! Second of all, there’s actually a good argument for finding more sustainable ways to produce coffee: Plants often require greenhouse-gas inducing pesticides, and the coffee industry is a notorious contributor to deforestation and labor rights issues. Not to mention that viable land is increasingly scarce — a recent study found that around half of the earth’s coffee-growing land will be unproductive by 2050, likely driving even more deforestation as farms move into (and destroy) greener pastures.

Whether Atomo’s version is actually better for the planet than traditional coffee will depend on where they source the copycat compounds, which they’re not yet releasing, in part because they haven’t settled on a final brew.

But their taste claims might be more than just blowing hot — er, coffee. According to Atomo, 21 of the 30 people in a recent blind taste test at the University of Washington — home of sleep-deprived coffee connoisseurs — picked their brew over Starbucks’ Pike Place Roast, an inoffensive medium-roast that Starbucks calls “the perfect everyday coffee in a cup” (uh, where else would you put it?)

Of course, we’ll have to taste it for ourselves and report back when it’s released later this year. But if climate change does end up annihilating all of the planet’s coffee plants, we’ll be thankful there are mad scientists out there keeping us caffeinated — that energy will be crucial in the climate war.