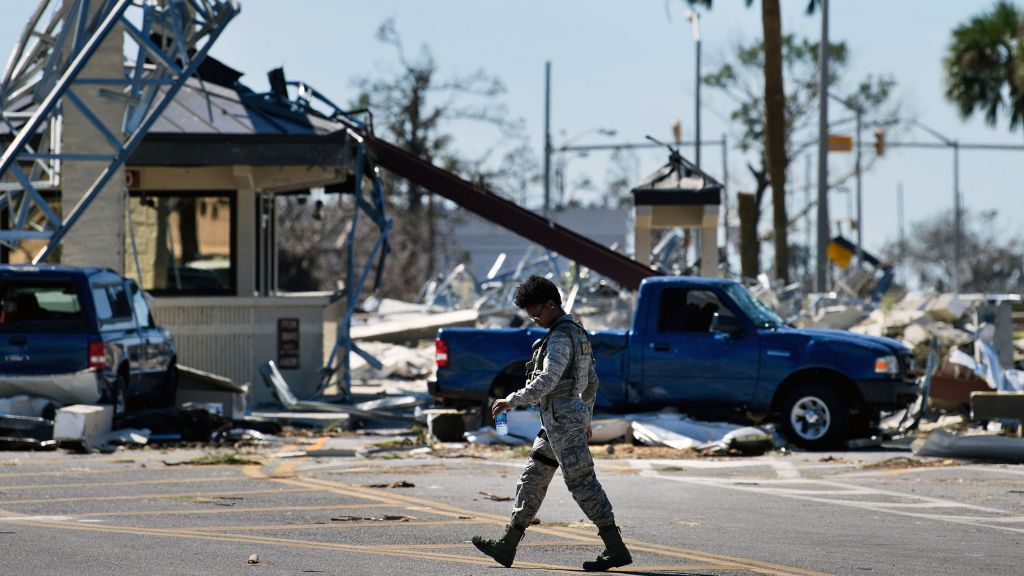 Less than two months after President Donald Trump said he did not believe a federal report outlining the existential threat of human-made climate change, the Defense Department has released its own report on how to manage the “effects of a changing climate.”

As part of the defense spending bill for fiscal year 2018, the Pentagon was asked to create “a list of the ten most vulnerable military installations within each service” in addition to “combatant commander requirements resulting from climate change over the next 20 years.” The 22-page report begins with 11 words that contradict the commander in chief’s description of climate change as a “very expensive” hoax. It states: “The effects of a changing climate are a national security issue.” Those lines comprise “the strongest part of the report,” retired naval officer David Titley, who once headed the Navy’s Task Force on Climate Change, tells Mother Jones in an email. But the rest, he says,“is disappointing, primarily because it does not answer the key questions Congress raised.”

For example, Marine Corps bases are not listed at all, even though Camp Lejeune in North Carolina, the Marines’ largest base on the East Coast, was devastated in September by Hurricane Florence to the tune of roughly $3.6 billion in damage. Ninety-five percent of the buildings on Tyndall Air Force Base in Florida were damaged by Hurricane Michael, yet in the appendix to the Pentagon’s report, Tyndall is not even mentioned as one of the Air Force’s most vulnerable bases.

Other aspects of the report just seem crudely out of date, even though it was submitted a month later than Congress had requested. In November, Naval Base Ventura County in California had to be evacuated due to approaching wildfires, yet in the report, the Navy does not list NBVC or, for that matter, identify a single installation where wildfires pose a “current” threat. Titley thinks the problem is the lack of an “apparent DOD standard for assessing the near- or mid-term climate future and impacts.” One reason for this might be because, according to the report, each military service was “free to select information sources they deemed relevant.”

Without a unifying standard, the report simply provides a “number of anecdotes to daily base and humanitarian operations, most of which are driven by routine weather events or tsunamis and earthquakes that have no connection to climate change,” he says. “Congress will likely not be amused by this report.”

“The Department of Defense presented no specifics on what is required to ensure operational viability and mission resiliency, and failed to estimate the future costs associated with ensuring these installations remain viable,” Smith said. “That information was required by law. The Department of Defense must develop concrete, executable plans to address the national security threats presented by climate change. As drafted, this report fails to do that.”

Representative Jim Langevin (a Democrat from Rhode Island), whose amendment to the 2018 spending bill mandated the creation of the report, said he was “deeply disappointed” by the report. “It is unacceptable that the Department has ignored the clear instructions provided by law, and it is unacceptable that our service members and readiness will suffer as a result.” Senator Jack Reed (also a Democrat from Rhode Island), ranking member of the Senate Armed Services panel, said: “The report reads like a introductory primer and carries about as much value as a phonebook.”

The Pentagon has long been in an ambiguous position when it comes to acknowledging and preparing for climate change. More than other federal agencies in the Trump administration, DOD has been less likely to skirt past the impact of global warming, given the persistent impacts of drought, wildfires, and flooding on military installations in the United States and abroad. But as an institution that treasures its reputation for transcending partisan politics, DOD has strayed away from emphasizing climate change in its internal documents.

One year ago, the Pentagon released another congressionally mandated report about climate change — that time, a survey of the ways climate change had affected thousands of global installations. Shortly after the release of the report, the Washington Post found out that staffers had removed nearly two dozen references to climate change from an earlier version. “Those and other edits suggest the Pentagon has adapted its approach to public discussion of climate change under President Trump,” the Post reported.

Even as Defense officials have become more careful with their rhetoric, they have actually increased their efforts to account for the effect of climate change in certain crucial ways. A warming Arctic has created new opportunities for conflict with Russia and China, something the Navy has become more conscious of in internal strategic guidance. In a recent piece about the Pentagon’s slow efforts to prepare for climate change, Jonathan White, who succeeded Titley as task force director, told Mother Jones: “Tying things to climate change could invite a scrutiny that was undesired.”

If anything, the Pentagon’s reluctance to deal in specifics may lead to more work for the department down the line. Representative Langevin noted: “I expect the Department to reissue a report that meets its statutory mandate and rigorously confronts the realities of our warming planet.”