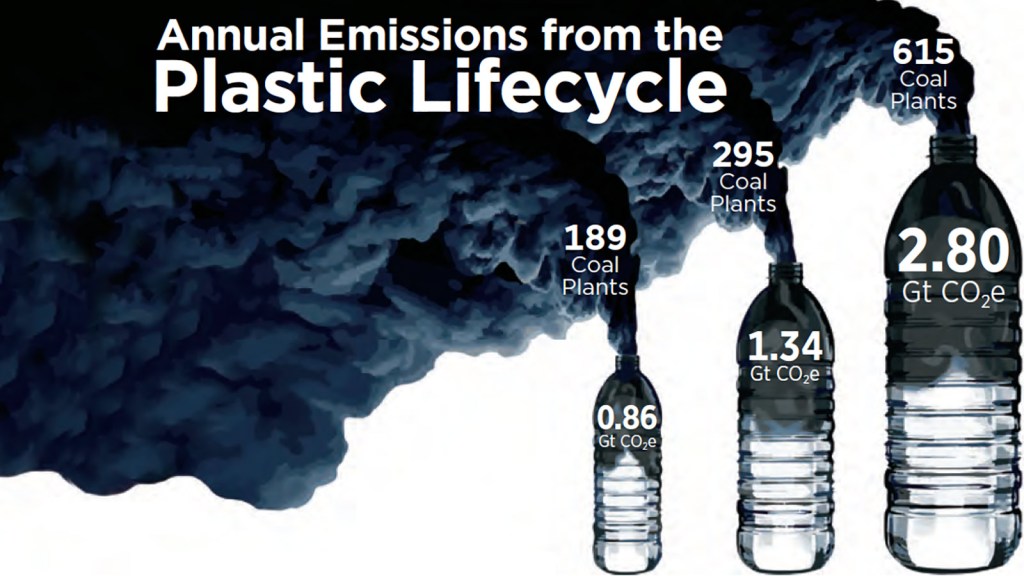 When you think about plastic, what comes to mind? Microplastics at the bottom of the Mariana Trench, whales dying with truckloads of garbage in their bellies, that zero-waste Instagram influencer you follow?

A new report shows it’s high time to think more about the fossil fuels that go into making those plastic products. The global plastic industry is on track to produce enough emissions to put the world on track for a catastrophic warming scenario, according to the Center for International Environmental Law analysis. In other words, straws aren’t just bad for unsuspecting turtles; plastic is a major contributor to climate change.

If the plastic industry is allowed to expand production unimpeded, here’s what we’re looking at: By 2030, global emissions from that sector could produce the emissions equivalent of more than 295 (500-megawatt) coal plants. By 2050, emissions could exceed the equivalent of 615 coal plants.

That year, the cumulative greenhouse gas emissions from production of single-use plastics like bags and straws could compose between 10 and 13 percent of the whole remainder of our carbon budget. That is, the amount of CO2 we’re allowed to emit if we want to keep emissions below the threshold scientists say is necessary to ensure a liveable planet. By 2100, even conservative estimates pin emissions from plastics composing more than half of the carbon budget.

So, congrats on ordering that metal straw from Amazon! But the report shows that the plastics industry is still planning on a major expansion in production.

Here are a few more takeaways from the report, which looked at the emissions produced by the plastics industry starting in 2015 and projected what emissions from that sector could look like through the end of the century:

But it doesn’t look like the industry is going to slow its roll on refining oil for plastics anytime soon. In 2015, 24 ethylene facilities in the U.S. produced the emissions equivalent of 3.8 million cars. There are 300 more petrochemical facilities underway in the U.S. Two of those, one being built by ExxonMobil and another by Shell, could produce emissions equivalent to 800,000 new cars on the road per year.

So if you’re gonna boycott single-use plastics, keep in mind that you’re not just doing it for the turtles — you’re doing it for us.