The Standing Rock Sioux will not back down 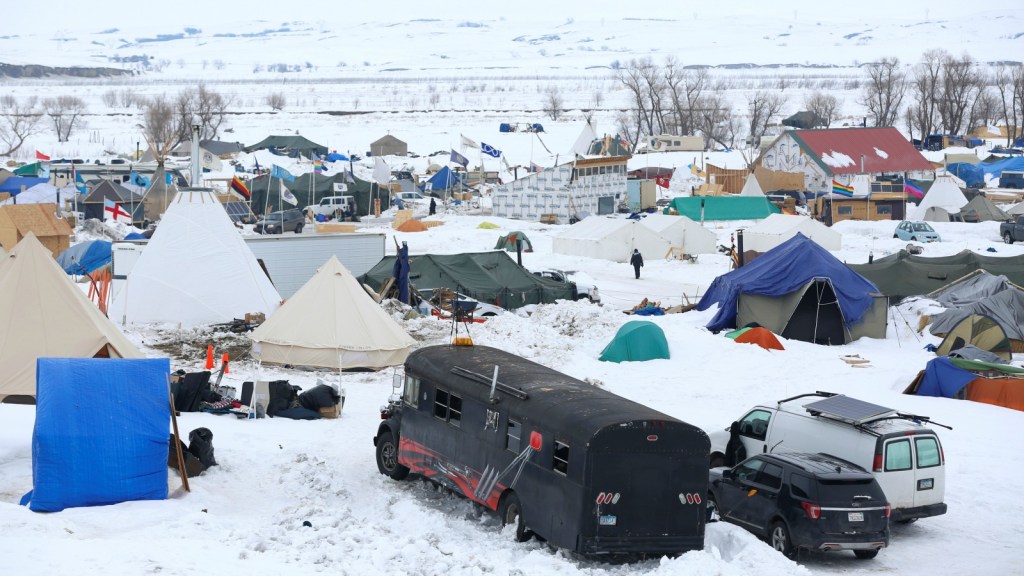 The Standing Rock Sioux will not back down

The Standing Rock Sioux Tribe and its supporters are vowing to resist Donald Trump’s executive order to allow construction of the Dakota Access Pipeline with legal action, civil disobedience, and a return to the “water protector” encampments.

“Creating a second Flint does not make America great again,” he added.

The executive order represents a major — if not wholly unexpected — reversal of fate for the $3.8 billion project, which was slated to cross the Missouri River just upstream of the Standing Rock Sioux reservation. The tribe feared the pipeline would contaminate their drinking water and destroy sacred sites.

On Dec. 5, the U.S. Army Corps of Engineers denied a permit for the pipeline to cross the river, handing a major victory to the thousands of Native American and environmental activists who established encampments on the banks of the river to oppose the pipeline.

The denial of the permit — and initiation of an environmental impact statement — were expected to delay the pipeline’s completion by years. Water protectors in Washington, D.C., were already mobilizing on Facebook to protest at the White House on Tuesday evening. “Stopping these projects will require action at home, in the halls of power, and in the path of each pipeline,” the group wrote.

Jan Hasselman, a lawyer representing the tribe, said that Trump had “unlawfully and arbitrarily sidestepped” the findings of the previous administration. “It’s an insult to the Standing Rock and all of its supporters in Indian country, and it’s a continuation of a historic pattern of trampling on Native rights,” he added.

Dallas Goldtooth, an organizer with the Indigenous Environmental Network and member of the Mdewakanton Dakota and Dine tribes, said he had expected Trump to support the pipeline, but did not imagine it would happen within days of the administration.

“These are attacks on our ancestral homelands,” he said. “These orders demonstrate that he is more than willing to violate federal law that protects the environment and protects our communities and protects indigenous rights for the benefit of oil and gas.”

Ron His Horse Is Thunder, a member of the Hunkpapa-Lakota Oyate tribe, said he anticipated a protracted court battle to stop the pipeline. But the former Standing Rock Chair said he feared the pipeline corporation, with the support of Trump, could eventually push forward.

“It’ll slow down the executive order, but it’s not going to stop it,” he said. “It takes us back to where we were when the whole protest started.”

The Standing Rock encampments swelled to include tens of thousands of people in early December, but the numbers shrank significantly following the announcement of the permit denial. The tribe asked supporters to go home for the winter following the December decision, and reiterated that call on Jan. 21, with a unanimous vote of the tribal council.

About 300 to 500 water protectors have remained at the camps through the harsh North Dakota winter, leading to multiple recent clashes with law enforcement and ongoing concerns about the harsh tactics employed by a militarized police force.

Linda Black Elk, a member of the Catawba Nation who works with the Standing Rock Medic & Healer Council, said campers had been working hard to clean up and considering whether to leave in accordance with the tribal council’s wishes. But Tuesday’s announcement changes that.

“We can’t back down now. We have to continue to stand to protect the water for future generations,” she said. “I’m not scared for myself, but I admit I am frightened for the future.”

Some activists who left in December may soon return to the camps.

Xhopakelxhit, a member of the Nuu Chah Nulth, Coast Salish, and Cree who was a steady presence at Standing Rock last year, said she would return as soon as possible.

“If you want to stand with Standing Rock, this is the time people should be there,” said Xhopakelxhit, who is a member of the Red Warrior camp, which organized direct actions against the pipeline. “The people still at camp are requesting help, more bodies, people who are willing to actually make a stand with them, because it’s the most dire need.”

Others promised the escalation of solidarity protests around the country.

“We need mass civil disobedience and a showing of solidarity with Standing Rock,” said Kandi Mossett, a member of the Mandan, Hidatsa, and Arikara tribes, who lives in North Dakota. “The Trump administration is sparking a revolution that makes us stronger than we ever were before.”

Cheryl Angel, a member of the Sicangu Lakota tribe, who was one of the first to join the Sacred Stone encampment, called for “action every day in the communities where the water protectors are standing right now.”

For Jumping Buffalo, a member of the Standing Rock Sioux whose English name is Troy Fairbanks, Trump’s announcement came on a sad day. The sixth-generation grandson of Sitting Bull was preparing to attend the funeral of his daughter when he spoke with the Guardian.

“You can’t drink oil. It’s so sad,” he said. Still, the tribal elder continued to hold out hope that his prayers would be answered.

“Have we as Native people ever been given a fair shake?” he asked. “Nah. But this time, the whole world is watching.”