The story behind the Extinction Rebellion symbol at climate protests 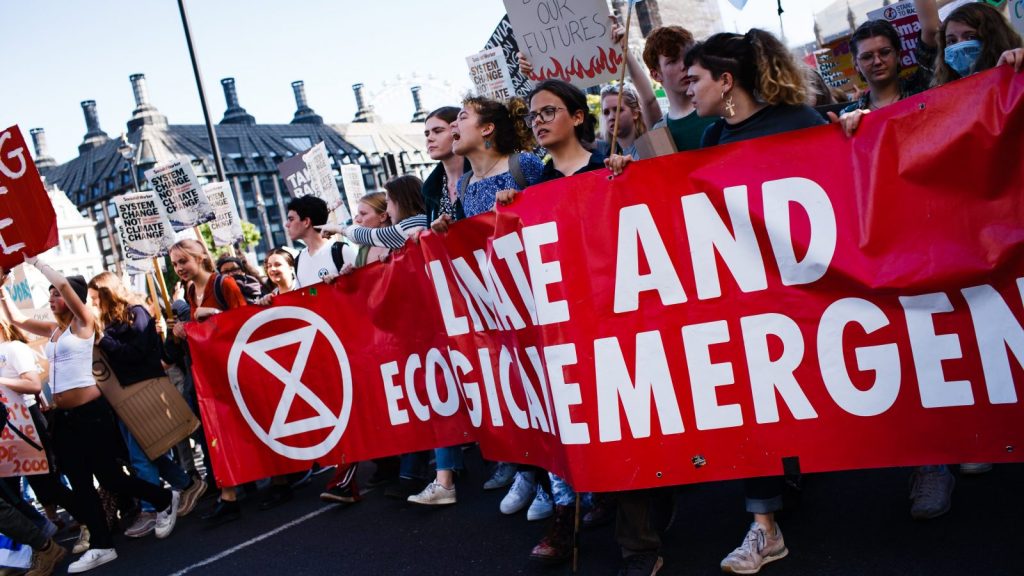 David Cliff / NurPhoto via Getty Images
design of the times

The story behind the Extinction Rebellion symbol at climate protests

As the Amazon burns, North American birds disappear, and scientists anticipate that by 2050, extreme, once-a-century storms and flooding will be more likely to happen once a year, concern about climate change has spurred a flurry of demonstrations across the world. Marching down the streets from Los Angeles to Berlin, people hold signs with messages like “There is no planet B,” each adorned with a symbol: two triangles inside a circle.

That circle represents the Earth, and the two triangles represent an hourglass, which “serves as a warning that time is rapidly running out for many species,” according to the extinction symbol’s website. The symbol was created in 2011 by a London street artist who goes by Goldfrog ESP and seems reluctant to give media interviews. But in a conversation with Ecohustler, he says he was inspired by the history of symbols. “I was making protest art about the declines of various individual species for awhile, but it felt quite inconsequential in relation to the scale of the problem,” he told Ecohustler. “I was thinking about how the environmental movement didn’t really have a well known [symbol] of its own.”

Where words can be clumsy, symbols are straightforward. “Humans are basically symbols oriented,” says Oscar Fernández, an adjunct professor at the Columbus College of Art & Design. “People like to use symbols because they’re simple; we resort back to picture recognition.”

The extinction symbol brings to mind other well-known political symbols, like the peace sign and the anarchy symbol, both of which also showcase a design inside a circle. The extinction symbol shares parallels with each: Like anarchism, which promotes self-governance and often intersects with anti-capitalist beliefs, climate movement often resists ownership and consumerism. The website for the extinction symbol says it cannot be used for fundraising efforts or by political organizations.

And the extinction symbol and the peace sign have similar origins: Both were created out of concern for the Earth’s longevity and have risen through protest movements. While the peace sign is now ubiquitous with the “hippie” generation, it was created in 1958 by Gerald Holtom specifically to protest nuclear weapons. The three lines inside the circle represent the combination of the letters “N” and “D” in the flag semaphore system used by sailors to communicate across long distances. It was easy to draw and recognize, so it took off, taking on new connotations as it gained popularity during the 1960s Vietnam protests. “I call it the chameleon; it started as an anti-nuke symbol and went on to represent the anti-war movement and environmentalism,” says Ken Kolsbun, a peace activist and author of Peace: The Biography of a Symbol. Perhaps the extinction symbol, too, will take on other meanings and cultural significance as the climate movement evolves.

Fernández thinks that the extinction symbol has the potential for staying power, at least from a design perspective. “From an expert artist to an amateur, anyone can easily draw this symbol, and it’s easily recognized,” he says. That’s important to the propagation of the symbol.

The design elements themselves are also classically appealing. “It’s not trendy, or going to go out of style,” says Fernández, pointing to the symbol’s use of contrast. The symbol’s circle, often perceived as a welcoming or positive shape, plays the foil to the sharp, “aggressive” angles of the triangular hourglass inside the circle. (Some psychology studies have found that downward-pointing V shapes throw up humans’ hackles and are perceived as threatening.) Kolsbun thinks the two triangles forming the hourglass are unpleasant to look at, and is concerned that it’s a bit negative with its “severe and sharp” angles. “The way the Earth is going, with climate change, we need something uplifting,” he says.

But that negativity also gives the symbol power. With no end to the effects of climate change, the ominous look of the symbol drives home the dark threat of extinction. “I’m not sure what ESP was thinking, but there’s a cleverness of putting that hourglass in the circular life-giving shape of the earth — like there’s a disease implanted,” says Fernández. “If he was one of my students, I’d give him an A.”