The U.N.'s watchdog on indigenous rights has her eye on climate change initiatives 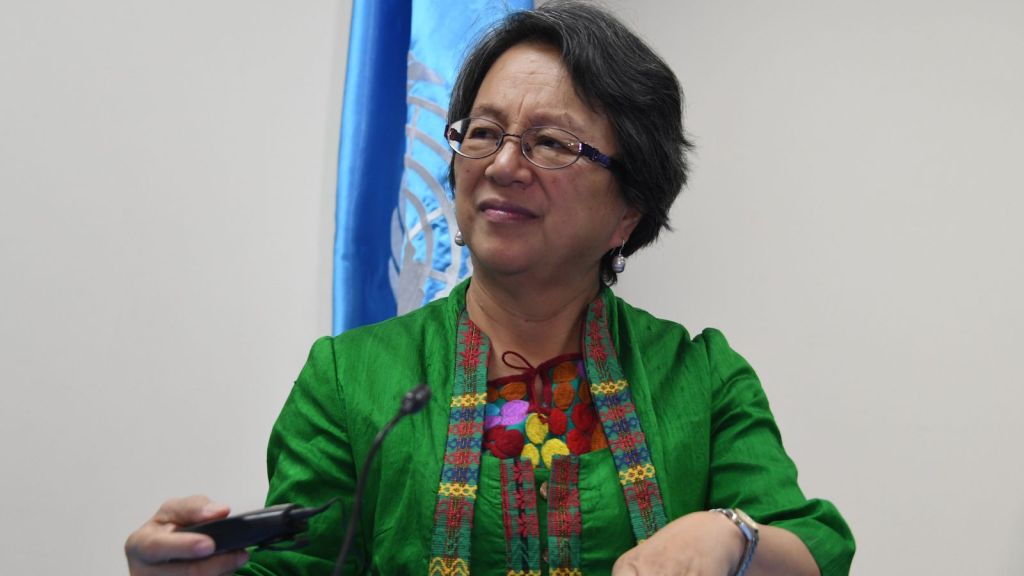 The U.N.’s watchdog on indigenous rights has her eye on climate change initiatives

Victoria Tauli-Corpuz, the United Nations’ special rapporteur on the rights of indigenous peoples, fights a complicated climate battle. She’s a member of the Kankanaey Igorot people of the Philippines, and it’s her job to monitor threats being posed to indigenous communities and report her findings to the U.N. human rights council.

And there are many fronts to those threats: Fossil fuels push indigenous communities from their territories and destroy the ecosystems they depend on, all while a warming world threatens their traditions and livelihoods. Renewable energy is an important solution, but it has also caused harm — from companies grabbing tribal lands to governments criminalizing indigenous activists who oppose new energy projects, says Tauli-Corpuz.

Tauli-Corpuz highlighted the opportunities and risks that need to be navigated in the transition towards a fossil fuel-free future during an affiliate avent at the Global Climate Action Summit in San Francisco. The event highlighted work by the Right Energy Project, an international collaboration that aims to provide 50 million indigenous peoples with access to renewable energy by 2030. The project also advocates for renewable energy that respects human rights.

Energy is key for indigenous peoples achieving self-determined development, Tauli-Corpuz said during the panel. There’s a high demand for renewable energy projects in those communities, she added. But the U.N. special rapporteur noted an important caveat: “I have been to several countries where renewable energy projects are put in place but without consulting indigenous peoples, without involving them in planning, and without them benefiting from it.”

In the worst cases, indigenous leaders have been targeted and killed for their opposition to controversial energy projects billed as “renewable.” She pointed to the death of Honduran activist Berta Caceres, who was killed while mounting a campaign against a large hydroelectric dam. “This is one example of how to do it wrong, how to approach renewable energy projects in a deadly way,” Tauli-Corpuz said. She submitted a report to the Human Rights Council this month on the criminalization of indigenous peoples defending their rights. Tauli-Corpuz herself was accused of terrorism by the Government of the Philippines: “How will we get stronger solidarity when indigenous peoples are subjected to those kinds of treatments?” she asked.

Tauli-Corpuz said that a human rights-based approach to renewable energy means that local people are consulted and that free, prior and informed consent is obtained — the standard established in the United Nations’ International Declaration on the Rights of Indigenous People.

Grist also asked Tauli-Corpuz what her hopes and expectations are as the Global Climate Action Summit unfolds.

She pointed to Tuesday’s announcement that foundations were committing $450 million for forest conservation and protection. The anti-deforestation efforts are supposed to boost indigenous peoples’ rights and opportunities in the process. “Donors said that indigenous peoples’ rights should be respected and violence against them should be stopped,” Tauli-Corpuz said.” For me as a rapporteur, I think those are very good indications.”

Still, Tauli-Corpuz will be keeping a close eye on how this shakes out: “How will we make sure these funds will go directly into the communities? In our experience, if there are announcements like that, big intermediaries come into the picture and eat up 80 percent of the budget and 20 percent only is left with the indigenous peoples.”

Finally, she pointed to the various partnerships between local governments, the private sector, foundations, and indigenous peoples: “Those are the areas which need much more work.” Throughout the week, indigenous activists are holding protests and coordinating their own programming to bring forth community-led solutions and demand participation in policy-making.