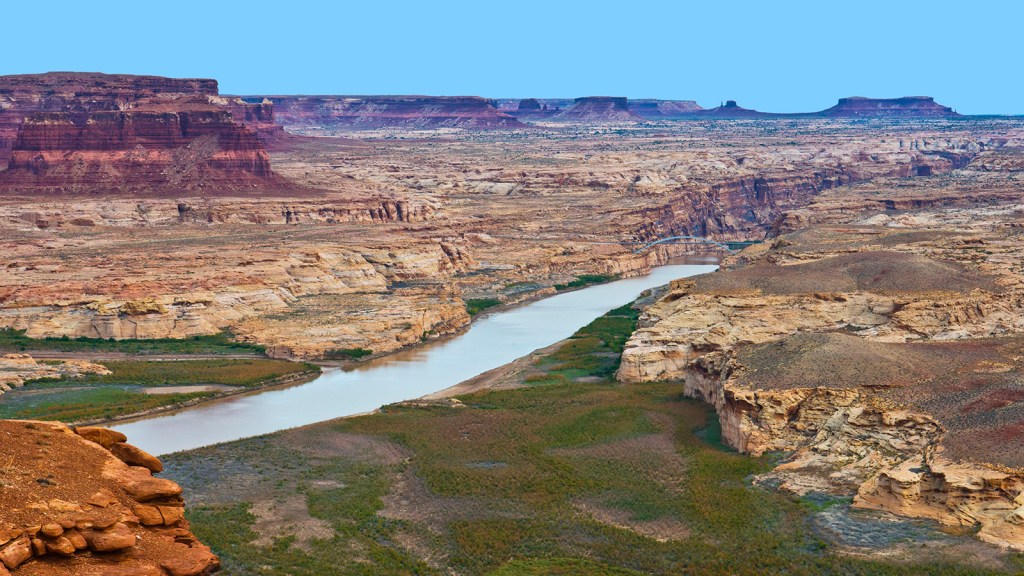 For generations, we’ve been using too much of the Colorado River, the 300-foot-wide ribbon of water that carved the Grand Canyon, supplies Lake Mead, and serves as the main water source for much of the American West.

The river sustains one in eight Americans — about 40 million people — and millions of acres of farmland. In the next 40 years, the region is expected to add at least 10 million more people, as the region’s rainfall becomes more erratic.

An especially dismal snowpack this past winter has forced a long-simmering dispute over water rights to the fore, one that splits people living above and below Lake Mead.

It’s a messy, confusing situation, so here’s an overview of who’s involved and what’s at stake:

Users of Colorado River water below Lake Mead — including the cities of Phoenix, Los Angeles, Las Vegas (collectively referred to as the “lower basin”) — rely on the reservoir as a lifeline. The people in the lower basin exist partly at the mercy of what happens in the upper basin, an area encompassing the snowcapped peaks of Wyoming, Utah, Colorado, and northern New Mexico, the source region of the river.

Big water users in the upper basin — Salt Lake City, Denver, Albuquerque, among others — are also getting nervous because snowpack in the Rockies has been dwindling, and there’s no physical way for them to store the water they depend on. There are no big reservoirs in the Rockies.

In recent weeks, tensions are rising after states in the upper basin sent a strongly worded letter to one of the river’s biggest users, the Central Arizona Water Conservation District, or CAWCD, which supplies water to Tucson and Phoenix. The upper basin states accused the utility of manipulating the complex system that governs Lake Mead in order to get more water. The Arizona utility denied the charges.

An upper basin city — Pueblo, Colorado — then pulled out of a regional conservation program, further threatening the spirit of long-term cooperation throughout the Colorado River basin. Denver has threatened to do the same. The quick escalation shows just how fragile the system really is.

In an email to Grist, Kathryn Sorensen, director of Phoenix’s Water Services Department, says the city “does not and has never supported CAWCD’s attempt to draw additional water” from the Colorado River. She said that the only way forward “is through collaboration among all stakeholders in the basin.”

The whole thing feels like the beginnings of a water war fought with cryptic, wonky tweets. As longtime Western water journalists Luke Runyon and Bret Jaspers recently wrote, “public shaming is how water managers police themselves.”

What’s happening could be seen as the slow death of an era of easy living, the unwinding of a nearly 100-year-old series of multi-state compacts (collectively called “The Law of the River”) that’s been widely viewed as too permissive. Over-reliance on the Colorado River has helped pave the way for rapid population growth across the region, from Southern California to Denver, which may now, ironically, begin to pose a threat to those same cities.

For many reasons, Arizona is last in line for the Colorado River’s water, and the state is already preparing for the mandatory restrictions that could be less than two years away. The latest official projections from the U.S. Bureau of Reclamation, the federal agency that manages the Colorado River system, shows that Lake Mead is likely to dip below the critical threshold of 1,075 feet above sea level late next year. That could trigger the first official “call on the river” — a legally-mandated cutback for certain users aimed at avoiding an all-out free-for-all.

In Phoenix, a worst-case scenario is now looking more and more likely. In just a few years from now, if (or, when) Lake Mead dips below 1,075 feet, the city may find itself in a position where it stops building new subdivisions, the state’s agricultural economy comes crashing to a permanent halt, and a fit of well-drilling begins to deplete the local groundwater.

And then there’s always climate change. On the world’s current emissions trajectory, sharply warming temperatures boost the odds of a megadrought in the Southwest sometime later this century to more than 99 percent. Such a drought would last a generation. Nearly all trees in the Southwest could die. The scale of the disaster would have the power to reshape the course of U.S. history.

For now, the spat over the Colorado River offers a glimpse into water politics in an era of permanent scarcity. The low snowpack in the upper basin states means that inflows into Lake Mead will be just 43 percent of normal this year, raising the stakes for conservation programs throughout the West. In the midst of long-running drought, 2017 was the most successful year for water conservation in decades — which is evidence that when there’s less water around, people can make things work.

“We must all find a way to collectively use less water while respecting the Law of the River,”Sorensen says. “That’s of course a tricky proposition because the Law of the River is basically the most complex governance structure ever created by human beings.”