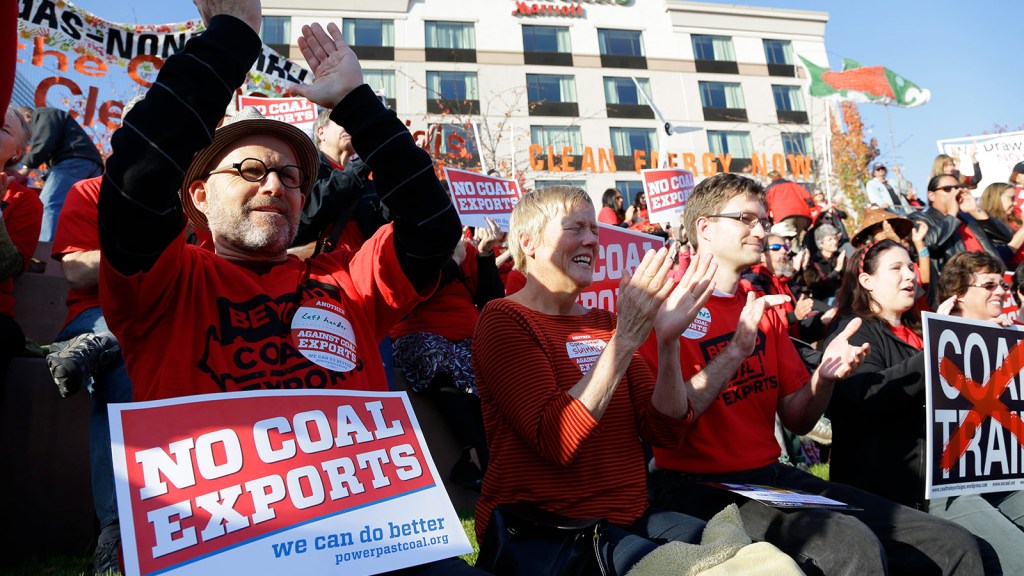 AP Photo / Ted S. Warren
any export in a storm

So far, Zinke has just proposed using an Alaska base, but Northwest activists and state authorities say they won’t back down if the Trump administration tries to bring fossil fuels through their states.

“The people of Oregon and Washington have rejected coal export and our government leaders have made really clear decisions that it’s too dangerous for our communities and our climate,” said Brett VandenHeuvel, the executive director of Columbia Riverkeeper.

In Washington state, leaders have worked on several fronts to successfully block coal export terminals, such as the Millennium Bulk Terminals Project in Longview, along the Columbia River.

The State of Washington’s Department of Ecology denied permits to the Longview terminal after determining that the risks it posed were too great. The project would have dredged 41.5 acres of the Columbia riverbed and increased dangerous diesel pollution in a neighborhood along the rail line in Longview.

“At some point enough has to be enough,” said Dave Bennett, a spokesperson for the department. “We will not back down from our legal responsibility to protect Washington’s people and environment, including the Columbia River.”

In Oregon, activists worked to pass the first law prohibiting fossil fuel infrastructure in Portland. The year-long battle began with protests over a Shell drilling vessel. Activists delayed its departure while chanting “Coal, oil, gas, none shall pass!”

“[Zinke’s proposal] completely flies in the face of local and state action all up and down the West Coast,” said Mia Reback, the former organizer of a Portland climate group involved in the efforts. “This is really a matter of life and death — for our local communities and for the biosphere,” she said.

Jan Hasselman, a lawyer with EarthJustice who has litigated against the Longview terminal, does not see this proposal as having much legal ground. Even with military projects, he says that states have a say when it comes to protecting water quality. Under the Clean Water Act, any federal permit also requires a state water quality certification, which was denied in the Millenium Bulk Terminals Project.

What Hasselman finds particularly alarming is the use of the military to corporate ends. “We have a military whose purpose is to protect the national interests,” he said. “It’s not there to benefit private corporate interests. Let the military be the military and do their jobs and don’t saddle them with propping up a dying industry.”