In Amityville, Pennsylvania, 10 acres of grapevines sprawl across the family-owned Manatawny Creek Winery. Owner Darvin Levengood is no stranger to vineyard pests. But he was met with calamity in the fall of 2017 when grape pickers were bombarded by swarms of a new invasive insect, the Spotted Lanternfly. Winery guests couldn’t drink on the open porch without finding the bug, and its “honeydew,” in their glass.

“It’s a misnomer,” Levengood said of the sweet-sounding residue. “Honeydew is a perfectly good fruit. This is nothing more than poop.”

Since the bug was first identified in 2014, it has been devastating vineyards and orchards in the Northeast. Lycorma delicatula, named for the lantern-shaped body of the adult that appears to glow under its dull wings, is used in traditional medicine in China, its native land. In the U.S., it was quickly considered one of the most destructive invasive species in 150 years.

The Spotted Lanternfly is unlike other invasive species in its voraciousness and indiscriminate palate, with a diet that includes at least 70 plants, said Heather Leach, an entomologist at Pennsylvania State University — the mothership of lanternfly research.

Apple, nectarine, almond, and cherry trees are among its choice snacks, along with other fruit-bearers like plum and apricot. Other woody favorites include pine, oak, walnut, and poplar trees. But the lanternfly is a vinophile, and prefers grapes above all else. The effects have been devastating for the Pennsylvania wine industry, where some growers have reported a 90 percent grape loss due to lanternfly damage.

Pennsylvania is an agricultural mecca and the country’s top hardwood producer. The grape, tree-fruit, hardwood, and nursery industries collectively contribute nearly $18 billion to the state’s economy. According to the U.S. Department of Agriculture, pretty much all those industries are in danger as a result of the spread of the lanternfly. Despite heavy quarantines across 14 Pennsylvania counties, the insect is on the move, hitchhiking on vehicles and luggage, and parasailing by swarm on breezes, sometimes showing up in vineyards by the thousands. It has been spotted in Virginia, Delaware, New Jersey, and New York, sprawling 6,900 square miles from its original U.S. landing spot.

Invasive species have been a problem since the first ships began moving plants and animals to the Americas, where native flora and fauna had no protection against them. In the early 20th century, Dutch elm disease, a fungus from Asia that is spread by elm bark beetles, killed 75 percent of native elms. Walnut twig beetles from the Southwest started an outbreak of “thousand canker disease” in 2010, causing the long, slow death of black walnut trees all over the U.S. The emerald ash borer, native to Asia, has been devouring ash trees from the Midwest to Pennsylvania since 2002, and the brown marmorated stink bug, also from Asia, has eaten its way through orchards in 43 states to date.

The list goes on, but the difference between now and centuries ago is the frequency and celerity with which materials move between continents and the increasing intensity of climate change.

Growers ranging from the Finger Lakes region to California’s Napa Valley are keeping a close eye on the bug as it works its way across the states. The California Department of Agriculture is very concerned, said Kyle Beucke, the state’s primary entomologist. “[The Spotted Lanternfly] poses a significant threat to the state’s agriculture, especially to vineyards,” he said. 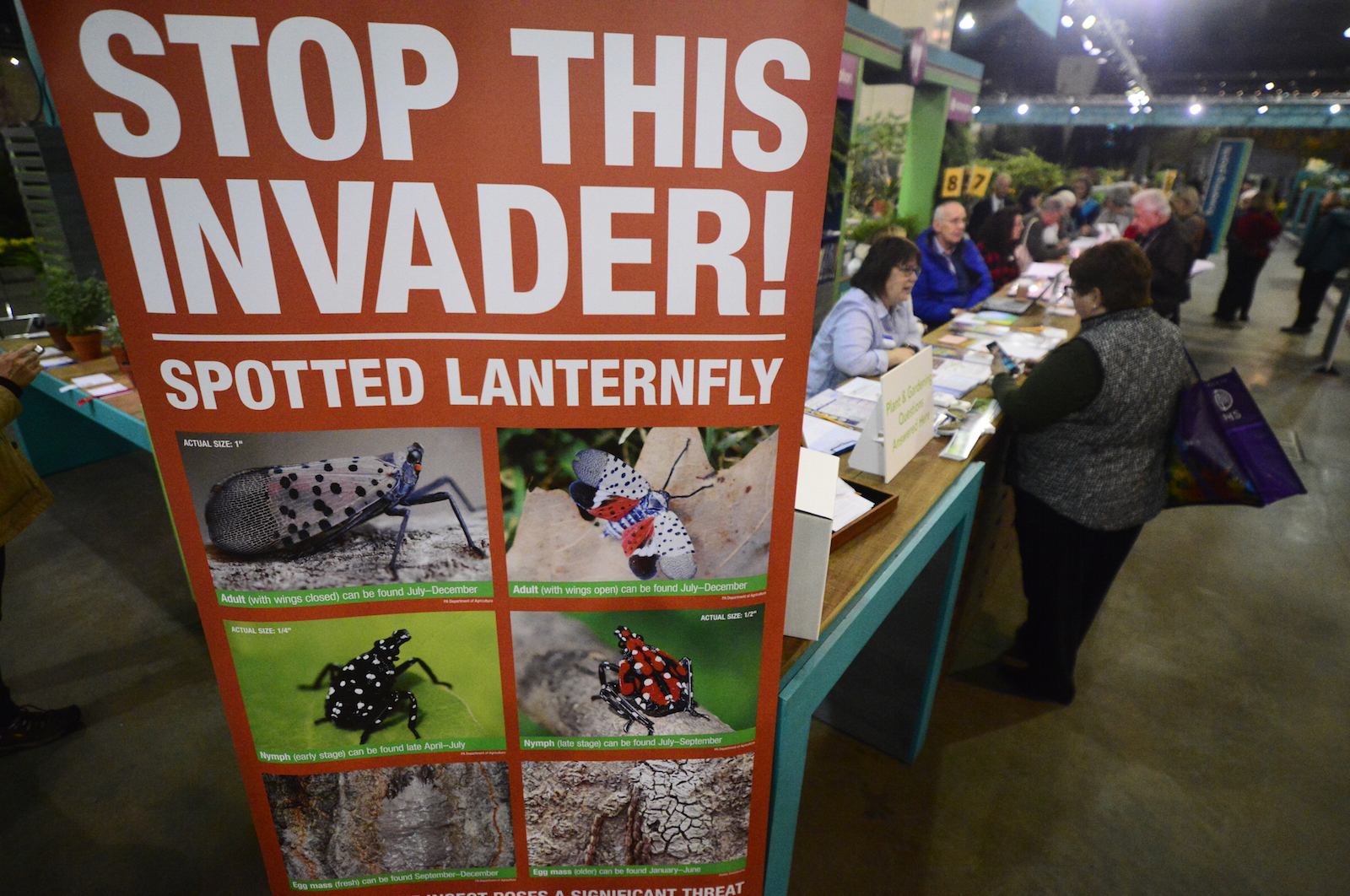 There are multiple factors that make the lanternfly especially concerning in the U.S. For a planthopper, a species of winged insect that hop more than they fly, the Spotted Lanternfly is large. And like most invasive species, it has no predators in its newly acquired territories.

“Not even chickens will eat them, and chickens are dumb,” said Dana Roberts, a lab technician and biologist with the Penn State extension project.

But it is this planthopper’s mouthpart that’s mostly to be feared, said Roberts. Its straw-like mouth can pierce through the hardest bark to reach the sugary sap inside. Unlike its relatives in the Hemiptera family, the insect lacks the ability to suck, preferring to munch on high-pressure plants that allow the sap to flow, like a siphon, through its mouth and into its stomach. The fly will tap its forelegs, like a builder looking for studs in a wall—seeking the tree’s “hot spot” before piercing the living plant tissue and drinking its life essence, leaving behind a gaping wound.

The sap passes quickly through the bugs as they dine, meaning they simultaneously squirt waste—politely called “honeydew” by entomologists—from the other end as they eat. The poop draws gnats and stinging insects, and leads to reduced photosynthesis and plant vigor. Not only that, but the honeydew mixes with the sap that pours out of the plant’s wound, concocting a perfect breeding ground for sooty mold, a black fungal accumulation that smells like vinegar, and, researchers believe, may also be an invasive species. In quarantined areas, you can trace the path of a Spotted Lanternfly invasion by looking for homes and yards blackened, as if by fire, from the honeydew-seeded mold left in the swarms’ wake. Researchers often wear raincoats when working in quarantined areas to protect their clothes from the sticky mess.

Yet on those same dying and mold-covered plants, the insects’ eggs remain mysteriously untouched, like the eye of a hurricane. That’s because while laying her eggs in tidy rows, the mother lanternfly sprays them with a thick, protective covering, the texture of which is reminiscent of mascarpone cheese. Researchers are unsure of the exact composition of the putty cocoon, but it seems to have antibacterial qualities.

Before coming to the U.S., the Spotted Lanternfly invaded Korea, quickly establishing itself and wreaking havoc on its agriculture. Its successful colonization there has been attributed to global warming, as its eggs have been able to survive increasingly warmer winter temperatures.

In America, the bug is still too new to say for sure that it’s able to thrive because of climate change. However in the Northeast, some states’ winters have warmed 5 degrees F since 1970, and in most of the U.S., winter is warming faster than the other seasons. The trend with invasive insects from warmer climates indicates that bugs and plants that would typically die off during the coldest winter months, setting a limit on northern expansion limits, are surviving.

“There’s going to be a flood of things like the southern pine beetle, ticks, chiggers — they’ll expand north. We can hardly imagine what all the changes are going to be,” said Matthew Ayres, professor of biological sciences at Dartmouth.

Yet, what is a normal or native ecosystem at this point? We’ve grown accustomed to our native topography, but humans have been destroying and creating new landscapes since the Holocene era, which began roughly 12,000 years ago. Land use, pollution, fire history—all factor into ecology.

“We’ve toyed with basically everything,” said Yolanda Chen, associate professor of plant and soil science at the University of Vermont. Our land is so manipulated, there’s really no such thing as a native ecosystem at this point, she said.

In Pennsylvania, the spotted terror’s progression appears nearly intractable, though neither the government nor residents have given up the fight. The USDA announced it will hire about 100 people this summer and spend nearly $18 million in the state to stop the bug’s spread. And in the town of Reading, where the bug has become a social phenomenon, a local minor league baseball team announced plans to give away 2,000 “Fightin the Spotted Lanternfly” T-shirts as part of their Agriculture Appreciation Night.

Last year, the Penn State University research team planted two test plots with live lanternflies on chardonnay vines at Levengood’s winery for monitoring and experimentation. The vines are between rows 50 and 52, so they refer to it as “Area 51.” The extraterrestrial parallels are easy to come by.

But this alien has already landed, and according to Ayres, the more realistic goal is to try to keep out the next Spotted Lanternfly.

At least compared with the uphill battle of the climate crisis, keeping the next invasive insect out is actually pretty easy. Invasive insect species that lay eggs almost exclusively travel via wooden pallets and live plant trade. We don’t have to use wooden pallets, said Ayres, there are many cheap alternatives like particle wood or plastic. We also need to be vigilant about asking where our plants come from when landscaping, he said, and avoid buying non-native ornamental plants.

“Ash trees are almost gone,” Ayres said, “and there’s nothing we can do. But there are thousands more damaging insects out there, knocking on our door, so to speak.”