Two years after the Republican succeeded in stopping the construction of new wind-energy projects in the state, he’s back at it again. Brown’s latest effort is a three-year moratorium on all land-based wind developments.

It would be one of the most strict in the country, effectively preventing the coastal state from harnessing a largely untapped source of clean energy and slowing its shift away from fossil fuels, said Cassie Gavin, director of governmental affairs for the North Carolina chapter of the Sierra Club. “It would be unfortunate for the long term energy mix, given that we need to address climate change,” she said.

At the moment, North Carolina runs mainly on natural gas and coal. Wind contributes under one percent to the electric grid. The state has a single wind project, the Amazon Wind Farm, a partnership between the retail giant Amazon and developer Avangrid Renewables. It generates 208 megawatts, which is used to power Amazon’s cloud computing services.

After Amazon, however, wind projects in the state have either stalled or died. Thanks to Brown’s last moratorium in 2017, one developer killed plans to build a $200 million wind farm. Now advocates fear a second project being considered in the northeastern corner of the state might fall victim to a new moratorium.

In 2016, the National Renewable Energy Laboratory estimated the state had the potential to build out more than 750 megawatts of wind energy on land, almost four times its current wind energy production and roughly 1.5 percent of the state’s needs. The potential for more than 10 times as much (8 gigawatts) exists offshore.

Brown’s proposal is the most recent effort by state legislators to derail the growing popularity of wind power. Texas, Oklahoma and Tennessee have all passed legislation in the last few years that either limited state funding, placed permitting requirements or restricted development of wind projects near military bases.

Since 2008, wind power in the U.S. has tripled, providing roughly 6.6 percent of the country’s electricity. Despite some noisy opposition, public support is also high. According to Ben Hoen, a scientist at the Lawrence Berkeley National Laboratory, who has studied public attitudes on renewable energy, just one out of five people surveyed had negative opinions about wind.

Hoen said that if lawmakers wanted to enact policy that has widespread support among their constituents, they would take a more positive stance on wind. “That state policy in North Carolina is not aligned with what those public acceptance surveys say.” 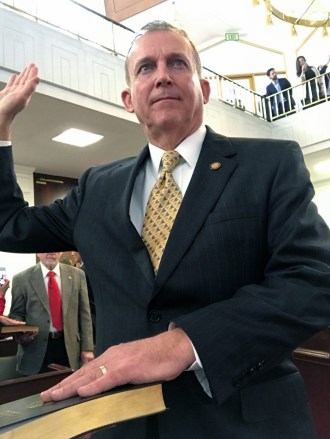 Brown, a car dealership owner, is the North Carolina Senate’s majority leader. Last year, his campaign received contributions from Duke Energy, Marathon Petroleum, and Koch Industries, a petrochemical conglomerate run by Charles Koch, according to the North Carolina State Board of Elections. Brown didn’t respond to requests for comment.

In 2017, when he introduced a standalone bill that placed a moratorium on wind projects, it initially failed to garner enough support. He then tried to attach the language to a budget bill, which lawmakers stripped out. Not dissuaded, Brown then pulled off a Hail Mary. He added language to a widely-supported bill promoting solar energy. Governor Roy Cooper signed the bill begrudgingly, saying he “strongly oppose[d] the ugly, last-minute, politically motivated wind moratorium.”

That moratorium lifted at the end of last year. In March, Brown introduced a bill that prohibited construction or expansion of wind projects near military bases. It effectively banned wind development in more than a dozen coastal counties. Two months later, wind energy advocates thought they’d scored a win when the bill failed to make an important legislative deadline. But earlier this month Brown resurrected it, tweaking the all-out ban to a three-year moratorium.

The key argument by proponents of such measures is that giant wind turbines, which can be 500 feet in height or more, can interfere with low-level military training routes. In an op-ed published in April, Brown said wind development in North Carolina will come at a cost to the state’s military bases. “The price to be paid is the highly valuable airspace and training ranges that we have worked so tirelessly over the years to protect,” he wrote.

But wind energy advocates argue that lawmakers pushing such legislation are proposing solutions looking for a problem. In 2011, in response to concerns that wind turbines may interfere with military operations, the Department of Defense set up the Siting Clearinghouse, a permitting process that allows military base leaders to review wind projects ahead of time. Often, these discussions lead to projects getting scaled back or altered to accommodate the military’s needs.

Take the Amazon Wind Farm. Last year, a study commissioned by the Pentagon found that if the project expanded to 150 turbines as originally planned, it would interfere with a radar system at a nearby Navy base. As a result, the project has been capped at 104 turbines.

“The fact is that the process is so rigorous and already considers the local bases and brings those local bases in to every discussion about a potential wind farm,” said Katharine Kollins, president of Southeastern Wind Coalition, an group representing the industry in 11 states.

Kollins said that Brown’s legislation has created a climate of uncertainty for the wind industry. She pointed to RES Americas dropping plans to build a $200 million wind farm with 29 turbines in Tyrrell County after Brown’s 2017 moratorium passed.

“That project was suspended indefinitely because the company felt that the political climate was too uncertain to continue to invest millions of dollars in development before a single turbine was even placed,” Kollins said.

Kollins worries that if the bill passes it will effectively kill Apex Energy’s plans for the Timbermill wind farm, a 48-turbine project on the eastern coast. The company pushed its work back by a year after the 2017 moratorium. “The longer that we continue to have these arguments within the state legislature, the less likely it is that that project will be built,” Kollins said.

For their part, Brown and other lawmakers have already signaled that they’re willing to compromise to get the bill to the governor’s desk. State Senator Jim Perry, one of its cosponsors, said a compromise in the House may wind up replacing the moratorium for a stricter permitting process.

Desalination plants are here, but they’re not solving the water crisis yet