It was one of those days when Manhattan felt like it was underwater: The air was soupy with August humidity, and a sheet of sweat covered my body as I made my way to 46th Street and Broadway. I had convinced exactly zero friends to come with me to see conceptual artist Mel Chin’s new exhibit about climate change, not because they weren’t interested in the subject but because of its location; New Yorkers will do anything to avoid Times Square. It’s like being in a crowded rush-hour subway, except you’re surrounded by seven-story billboards and thousands of tourists.

Damp and dewy, I arrived at Unmoored, a “mixed reality experience” that “imagines a future in which New York is underwater, as projected by climate scientists,” according to the exhibit’s website.

About 10 people in Disney character costumes were milling about, hoping tourists would take pictures with them and then tip them. I could see the sweat glistening in openings of the polyester costumes of Olaf, Elsa, Minnie Mouse, Mickey Mouse, Iron Man, and two identical Teenage Mutant Ninja Turtles.

The exhibit has two parts: The first is Wake, a 60-foot long sculpture that evokes the skeleton of a ship; affixed to the bow is a 21-foot tall sculpture of the 19th-century opera star Jenny Lind (she was a figurehead on many ships at the height of her popularity). The sculpture sits in front of a billboard advertising, among other things, bras. 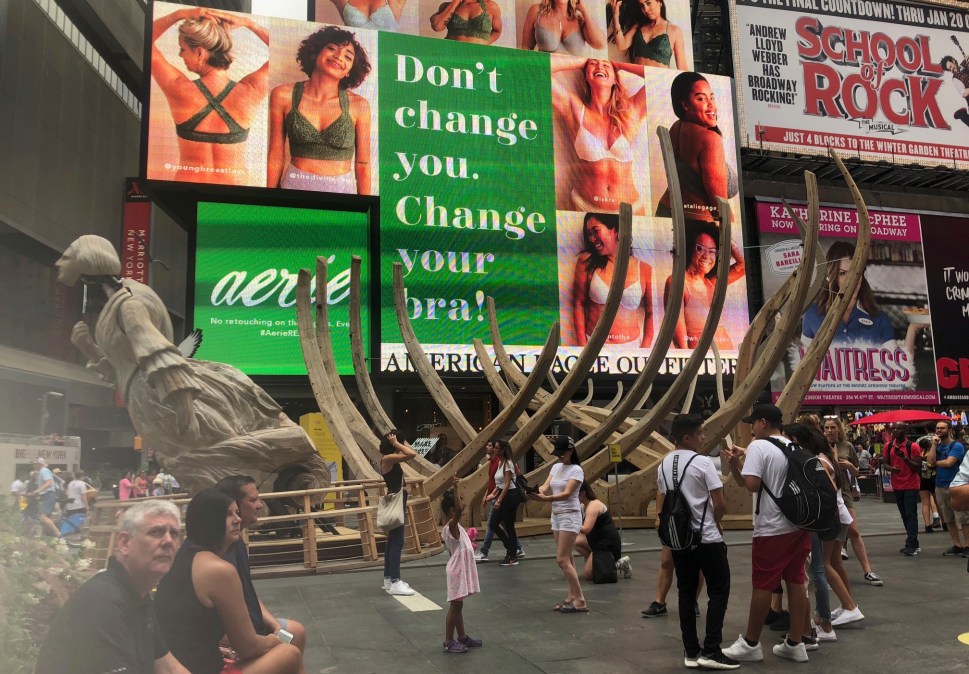 The second part of the exhibit is an interactive video courtesy of Unmoored, an app developed with Microsoft. Visitors can use HoloLens (Microsoft’s virtual reality headset) or stand at a Wi-Fi kiosk and download the app to their smartphones—it’s too big to download without an internet connection.

All around the sculpture are yellow circles painted on the ground that properly position visitors. You stand on the circle, open the app and point it downward until the circle on your screen and the one at your feet align, then look back at the sculpture. For a minute it seems as if you’re just looking through the phone’s camera. Then, an animation of the wooden skeleton being re-skinned, turning back into a boat, fills the screen.

I stood there for about five minutes as the animation progressed. Eventually the boat floated away. Then a fleet of new boats came, and the Times Square on my screen was jammed with water craft of all sizes. Chin seems to believe that when we get to the Waterworld stage, traffic is still going to be Times Square’s biggest concern.

Chin refers to this work as “a physical and virtual gateway to the future of human existence, inviting participants to contemplate their place within the world’s transforming climate.” I translated that kind of art-speak to mean that I was supposed to think: So this is what it would be like if storm surge and rising sea levels covered Manhattan in water. 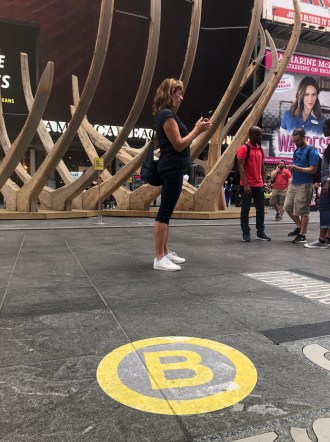 Though I didn’t think that, in part because I was busy checking to see if other people were using the app. But I also didn’t get there because I wanted to know what would happen to these buildings and billboards, to the physical environment of Times Square. If 20 feet of water permanently fill your lobby, do you need to dismantle the building? Does everybody get electrocuted by the blinding Times Square lights? I was interested in what would happen from logistical and urban planning perspectives; the aqua traffic jam seemed the least of the issues. Still, I continued to hold my phone up, watching the scenario progress.

Then, all of the sudden, I was surrounded, not by water but by Disney characters. Olaf, Minnie Mouse, Iron Man and both Teenage Mutant Ninja Turtles had encircled me. “You want a picture?” they asked, assuming that this whole time I had been pointing the camera at them, snapping away without tipping. “No, no,” I said. “I’m doing the exhibit. I’m watching the boats.” I showed them the images on my screen, which had turned into a stilled parade of the rusted undersides of motorboats. They nodded, spoke to each other—I could only make out “agua”—then smiled at me.

This interactive exhibit did have plenty of interactivity; people were posing for photos inside it and around the ship. But only one other visitor was actually using the app — or trying to. He was standing on a yellow circle, having trouble getting the app to work. I became his tech support, showing him how to align the image on his phone and the one beneath his feet.

“What do you think it’s about?” I asked him.

“Climate change,” he said. “New York is going to be underwater.”

I asked where he was visiting from. India: a small city in the state of Kerala. I asked if they talked about climate change there. “Oh yes,” he said. “All the time. It’s getting hotter and the weather is getting more dangerous.”

We watched the boats sail through his screen, but it was so hard to compete with the 100-foot walls of videos, the throngs of tourists, the Disney characters drowning in their sweat-filled polyester costumes. One is already shutting out reality in Times Square. One is already overwhelmed, shutting down senses to survive.

I believe in art’s power to enlighten people and change minds — I have to believe that as a writer. But it was hard to believe that anyone would think about climate change differently — and, more importantly, change their behavior to curb it — after participating in the exhibit. If anything, it made it look cool, a better version of itself, when the real effects of climate change are so unglamorous: a town’s livelihood dries up or the shoreline of a beautiful coast drowns; people’s homelands slowly become less hospitable and habitable; marginalized people grow ever more marginalized.

Maybe if this VR experience had some kind of olfactory component. If we could smell the rotting rat carcasses. If we could hear the creak of structurally unsound buildings, see those people who weren’t lucky enough to secure boats, clinging to building cornices for their lives, maybe that would inspire more reaction. Climate change art — especially digital and interactive climate change art — could and should scare the bejesus out of us. It could spur us to action. Or at the very least it could give us a real sense of what’s to come.

A few days later, I spoke to my sister-in-law, a painter and ceramicist, about the exhibit. She noted the Chin is a big, important artist whose work has been exhibited internationally and talked about, admirably, for decades (he’s best known for placing artwork in unusual landscapes). Augmented reality art is new and the fact that Microsoft was participating not just in public art but public art about climate change — those were big, important things. That the words “climate change” were being uttered in and around Times Square was something to feel reasonably good about.

“I think the most important motivation as an artist is to use what James Baldwin has described as extracting the question that is buried within the answer,” Chin has said. “If the answer is ‘The world will be inundated and destroyed by our own doings,’ then what is the question that we have to ask now? This project is about now.”

But I’m not sure anyone in Times Square was asking any questions, other than, “Do you know where I can buy an umbrella?” Times Square is perhaps the least introspective place on the planet.

A few droplets of rain finally trickled down, and the Disney characters tucked themselves beneath the awning of a Baccarat store. It was somehow even hotter than it had been a few minutes before. “I have to head out,” I said to my fellow Unmoored visitor. We shook hands. He told me his name was Disney — though I did not ask him why. It just seemed so perfect and strange, which is maybe what I wanted the art to be.

Then, suddenly, Times Square really was under water. The rain came in sheets, in buckets, in all the clichéd metaphors in which rain comes. The sky was somehow bright and gray at the same time, in a way that felt uniquely New Yorkish, and tourists scrambled for whatever bit of cover they could secure. Some, like me, just gave in and got wet.