Tom Steyer and the link between hate groups and climate denial 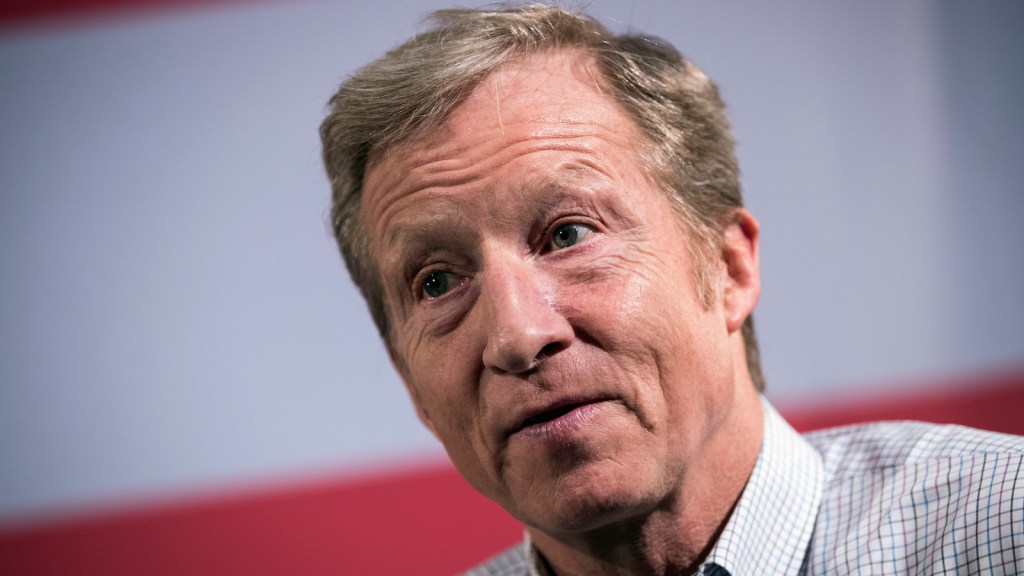 Tom Steyer and the link between hate groups and climate denial

Before Tom Steyer was a high-profile figure calling for the president’s impeachment, before the attacks directed at him escalated from name-calling to threats and violence, and before the president demeaned him as a “crazed & stumbling lunatic,” the Democratic donor was familiar with being a target for the extreme right because of his prominent work in climate change advocacy.

Last week, Steyer learned he was the intended recipient of one of the 13 bombs mailed to prominent critics of President Donald Trump. It was a violent escalation of attacks on the billionaire hedge fund manager and philanthropist from those that I had observed early in 2015. At that time, he surpassed Al Gore as the most hated environmentalist in conservative America after spending millions advancing pro-climate candidates in the midterms.

In the days after the attempted bombing, Trump lashed out at Steyer for a critical interview he had with CNN. Then came the shooting at the Tree of Life synagogue in Pittsburgh, which sharpened the national conversation about the connection between extreme rhetoric and violent actions. Republican defenders of Trump have dismissed the relationship, although there has been a surge in racist and anti-Semitic attacks since he took office.

The link between hate groups and climate denial is complex and anecdotal at best, with little research examining the overlap between the two. But there is enough anecdotal experience to prompt prominent figures who study and advance science and policy to see a connection. In an interview with Mother Jones, Steyer said he sees the intolerance and hyperpartisanship that has marked the GOP as fundamentally connected with the party’s “willingness to directly lie” on climate change science.

“Climate change was really one of the seminal points for the Republicans because they decided they could straight-up lie,” he said in a phone interview. “When you look at the kind of violent and dehumanizing rhetoric that the president has indulged in, it’s entirely consistent with the idea that there is no cost to lying, there is no cost to really attacking the basic interest of the American people. So I think climate was the template.”

These questions about tensions concerning the climate change debate are not as well understood or explicitly drawn as the immigration debate, where George Soros is charged in coded language with pulling all the strings in a vast global conspiracy, as the New York Times reported, to “undermine the established order and a proponent of diluting the white, Christian nature of their societies through immigration.”

But the right’s denial of climate change science nonetheless repeats many of the same patterns that have appeared in other extremist targets, from guns to immigration to abortion. These patterns include the appropriation of Nazi or anti-Semitic imagery, the demonization of funders and prominent advocates, and the distortion of the terms of the debate. Climate change has become another flashpoint for irrational, hateful, sometimes violent rhetoric, and even personal attacks on people who have risen to some prominence as scientists, funders, and advocates.

Stephan Lewandowsky, a University of Bristol cognitive scientist who studies science denial, notes how the virulently anti-government message that has long dominated climate denial discourse shares common themes with people who believe in conspiracy theories writ large. “Science as well as respect for others’ religions or ethnicity are considered establishment norms, just like truth-telling, and hence the people who support (and are incited by) Donald Trump are likely to reject all of those norms,” Lewandowsky tells Mother Jones, “which again would link science denial, anti-Semitism, and conspiracy theories as a cluster or related phenomena.”

The appropriation of particular labels, often involving Nazis, has also appeared in environmental debates. Self-described climate change skeptics have rejected being called “deniers,” arguing, as the conservative think tank figure and Trump EPA transition official Myron Ebell has, that the label is meant to tie “some people to Holocaust denial.” But the skeptic side has deployed an even more direct appropriation of Holocaust imagery.

In 2014, University of Alabama-Huntsville meteorologist Roy Spencer suggested on his blog that the best defense against the label “denier” would be to call those who were concerned with rising temperatures “global warming Nazis.” He even used an image of a swatsika on the post to illustrate his point, sparking a flurry of news coverage. His suggestion drew condemnation from the Anti Defamation League Southeast chapter.

In another incident, while talking to a gathering of oil and gas representatives in March, Representative Clay Higgins, a Louisiana Republican, casually and repeatedly referenced the “Three Percenters,” a movement linked to violent white supremacy that sprung up after Obama’s election, taking its name from the myth that 3 percent of colonists were behind the American Revolution. “You, ladies and gentlemen, are the Three Percenters of the modern era,” he said in remarks first reported by DeSmog Blog, “where wars are fought with monies and strategies and energy.”

Climate change denial extends across a spectrum, ranging from arguments against solutions, to assertions that scientific findings have been exaggerated, but they all tend to return to a central point: Blaming a small number of alarmists for perpetuating large-scale fraud that has convinced thousands of scientists and countries to devote billions of dollars to combating a myth that the planet is warming. The climate-denial world has an even more tightly knit web of industry-connected groups, shown for decades to undermine the science out of self- preservation and profit. Organizations like the Heritage Foundation and the more far-flung Heartland Institute work to provide a patina of intellectual legitimacy for the same talking points that wind up on Fox News — and on social media.

Though the science itself is nonpartisan, the belief or disbelief in climate change is not, embodying many of the establishment norms that large swaths of the GOP have come to reject, from accepting science to embracing global cooperation as a solution to complex problems. In the same way that the right has transformed Steyer and Soros into all-powerful villains of the left, some climate scientists have long been targets of similar abuse.

The small world of climate skeptics, who often tend to be older, white, and male, has responded to the mailed bombs with a similar kind of denial they show on the science. Steve Milloy, a member of Trump’s EPA transition team who rejects climate science on his JunkScience blog, suggested the bomb threats were a false flag. “Having a fake bomb addressed to you is the new Democrat status symbol,” he tweeted. E&E News caught a number of prominent climate skeptics advancing a similar line.

“When it comes to climate denial, the No. 1 scientist who is accused of pretty much everything that you can possibly be accused of is Mike Mann, who is accused of single-handedly getting the world’s governments to commit billions of dollars to this hoax,” Lewandowsky says. “[It] is entirely consistent with what conspiracy theorists always do, which is to say they identify a few people who are targets. And then they say they are so powerful that everything in the world is driven through these few.”

Penn State climate scientist Michael Mann is familiar with the phenomenon, having been the subject of decades of attacks that reached a critical point when climate scientists’ emails were hacked and dumped on the web in 2009, feeding a media frenzy that gave undue weight to conspiracy theories. Around that time he was named alongside other experts on a neo-Nazi website, Stormfront.

“The same hatred and conspiratorial ideation that is that the center of Trumpism also underlies the poisonous atmosphere that pervades the public discourse when it come to the issue of climate change,” Mann wrote in an email. He has described the harassment he faced in more detail in his book, The Hockey Stick and the Climate Wars, explaining an envelope of white powder he received and the flood of hate mail and death threats charging him with orchestrating a global hoax.

NASA climatologist Gavin Schmidt has also long been on the receiving end of both anti-Semitic and climate change denier hate mail and emails, sharing some of his experiences on his Twitter feed. Social media has amplified and provided a platform for toxic harassment, but “I’m not seeing a commensurate rise in climate denial,” he wrote in an email. “If anything it’s the other way: the denialist positions in prominent speakers are moving towards acceptance of the science — not all the way of course — while still pushing back on solutions. And the out-and-out denial is not getting the audience it did.”

Katharine Hayhoe, a Texas Tech climate scientist and self-identified evangelical Christian, often invokes her faith in explaining the need to act to slow down the progress of global warming. Often prominent deniers invoke their faith to advance fossil-fuel-friendly talking points — think Scott Pruitt, who invoked God to justify burning fossil fuels. Hayhoe, who also finds herself facing harassment for her work, draws on her religion to make a moral case to act on the scientific evidence, not bury one’s head in the ground. A scientist alarmed by the impacts of climate change, she has also observed that the anger surrounding the climate debate may have its roots in similar impulses present in other toxic debates. “I think that right now we’re facing a time of tremendous change in race, gender, socioeconomic status, and privilege. It’s especially frightening if you feel you’re going to lose from the change.”

That fear of change and uncertainty, Hayhoe thinks, is connected to the anger. Replacing coal, oil, and gas, which we’ve used for hundreds of years, with solar panels and wind turbines, is still another example of the unpredictability inherent in change.

“I think we often tend to treat these issues as all separate issues,” she says. “Rejection of climate change and harassment of scientists is a package. It’s not an issue that stands by itself. It goes along with symbols of change, racial issues and gender issues and political.”