Trump plans to target the EPA with new executive orders 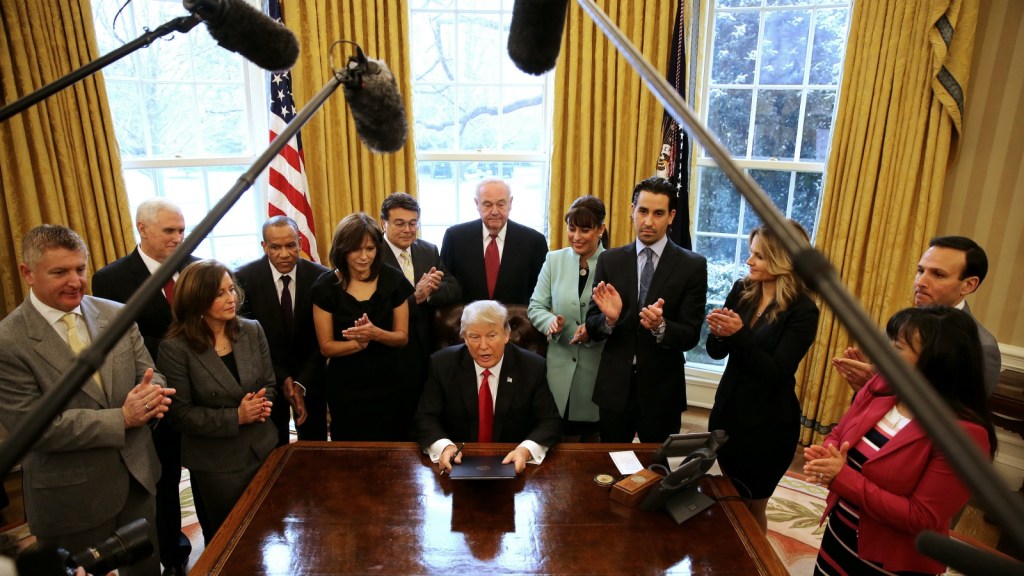 Trump plans to target the EPA with new executive orders

Scott Pruitt will almost certainly be the next head of the Environmental Protection Agency. The Oklahoma attorney general’s nomination is expected to sail through Senate — possibly as soon as Friday — despite Democrats’ protests that he is unfit to lead an agency that he has repeatedly sued. The administration has already imposed a freeze on the EPA’s social media, halted its rulemaking, and reportedly mandated that all agency research be reviewed by a political appointee before being released to the public. But next week, once Pruitt is sworn in, the real frenzy will begin.

According to Reuters, President Donald Trump plans to sign between two and five environmental executive orders aimed at the EPA and possibly the State Department. The White House is reportedly planning to hold an event at the EPA headquarters, similar the administration’s rollout of its widely condemned travel ban after Defense Secretary James Mattis took office. While we don’t know what, exactly, next week’s orders will say, Trump is expected to restrict the agency’s regulatory oversight. Based on one administration official’s bluster, the actions could “suck the air” out of the room.

Trump may have hinted at the forthcoming orders in his unwieldy press conference on Thursday. “Some very big things are going to be announced next week,” he said. (He didn’t make clear whether or not he was referring to the EPA.)

Former President Barack Obama’s array of climate regulations, including the Clean Power Plan limiting power plant emissions, are certainly high on conservative activists’ hit list. So too is the landmark Paris climate deal, in which Obama agreed to dramatically cut domestic carbon emissions and provide aid to other countries for clean energy projects and climate adaptation. The EPA’s rule that defines its jurisdiction over wetlands and streams is also a prime target. As attorney general, Pruitt launched lawsuits against a number of these regulations.

“What I would like to see are executive orders on implementing all of President Trump’s main campaign promises on environment and energy, including withdrawing from the Paris climate treaty,” said Myron Ebell, who headed Trump’s EPA transition and recently returned to the Competitive Enterprise Institute, in an email to Mother Jones.

H. Sterling Burnett, a research fellow the Heartland Institute, which rejects the scientific consensus on climate change, says Trump could start by revisiting the Obama administration’s efforts to calculate a “social cost of carbon” — and by forbidding its use to determine costs and benefits of government regulations. He also wants to see broader restrictions on how the EPA calculates costs and benefits. In particular, Burnett hopes Trump will prohibit the agency from the considering public health co-benefits of regulations — for example, attempts by the EPA to argue that limits on CO2 emissions from power plants also reduce emissions of other dangerous pollutants.

Or Trump could take a cue from Republican Attorneys General Patrick Morrisey (W.Va.) and Ken Paxton (Texas), who recommended in December that Trump issue a memorandum directing the EPA to “take no further action to enforce or implement” the Clean Power Plan. (The Supreme Court halted implementation of the rule a year ago while both sides fight it out in federal court.)

The holy grail for conservatives would be reversing the agency’s so-called “endangerment finding,” which states that greenhouse gas emissions harm public health and must therefore be regulated under the Clean Air Act. The endangerment finding is the legal underpinning for the bulk of Obama’s climate policies, including the restrictions on vehicle and power plant emissions. Undoing the finding wouldn’t be an easy feat and can’t be accomplished by executive order alone. The endangerment finding isn’t an Obama invention; in 2007, the Supreme Court ruled that the EPA must regulate greenhouse gasses if it found they harmed public health. Pruitt said during his confirmation hearing that the administration wouldn’t revisit the finding, but he also launched an unsuccessful lawsuit against it in 2010. Neither Ebell nor Burnett expects to see Trump to tackle the endangerment finding just yet.

Environmentalists are already planning their response. Litigation is certainly an option, but it would of course depend on the details of Trump’s executive actions. Several groups, including Earthjustice and Natural Resources Defense Council, have already sued to block Trump’s earlier executive order requiring that every new regulation be offset by scrapping two existing regulations. Their case: The administration can’t arbitrarily ditch regulations just because the president wants fewer of them on the books.

They could be making a similar case soon enough. “A new president has to deal with the record and evidence and findings,” Earthjustice’s lead attorney, Patti Goldman, said. “If you take climate and the endangerment finding, that is a scientific finding that is upheld by the court. That finding has legal impacts. If there’s a directive along those lines, there will have to be a process.”

Of course, anti-EPA Republicans disagree about what is constitutional, which is one reason the agency is in for a tumultuous ride over the next four years. For many conservatives, no EPA at all — or at least one that has no regulatory powers — is the best option. “I read the constitution of the United States, and the word environmental protection does not appear there,” said Heartland’s Burnett. “I don’t see where it’s sanctioned. I think it should go away.” A freshman House Republican recently introduced a bill to do just that, but there’s no sign that it’s going to pass anytime soon.

And while Burnett acknowledges that the EPA probably won’t be vanishing in the near future, he’s been happy with the direction Trump has taken so far. He’s pleased with the president’s moves to restart the Keystone and Dakota Access pipelines, and he’s hopeful that the administration will move toward an EPA with “smaller budgets and a smaller mission, justified by the fact that you’ll have fewer regulations.”

Depending on what Trump does next week, that could be just the beginning.