Trump’s environmental assault continues, and now he’ll have Pruitt as a henchman 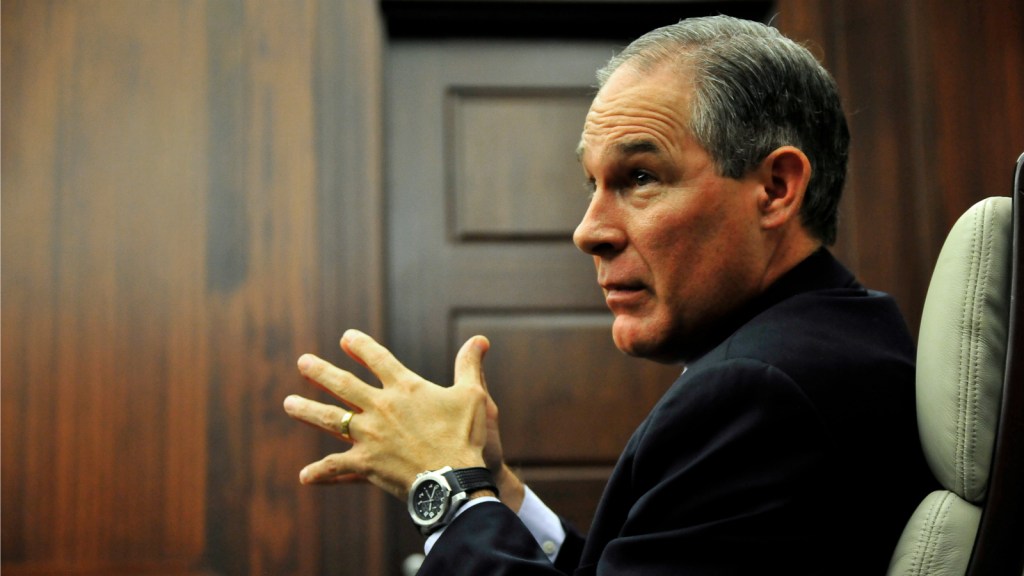 Trump’s environmental assault continues, and now he’ll have Pruitt as a henchman

Even as national security scandals and general chaos engulf the White House, President Trump continues to wreak environmental havoc. Your Trump Tracker columnist already told you what POTUS got up to in his first and second weeks; now here’s a roundup of the mayhem from weeks three and four.

What happened? Scott Pruitt is expected to be confirmed by the Senate as administrator of the Environmental Protection Agency on Friday. [UPDATE: Yep, he was confirmed.] He doesn’t lack for detractors. EPA employees are making unprecedented calls for senators to oppose his nomination. Maine Republican Susan Collins says she won’t vote for him. Democrats have been kicking up a fuss over Pruitt’s refusal to release emails from his time as Oklahoma attorney general, when he did the oil and gas industry’s bidding. On Thursday, an Oklahoma judge ordered Pruitt to release those emails by next Tuesday. But none of that will be enough to stop him from being confirmed.

So the EPA will be led by a man who appears to hate the EPA. Pruitt has sued the agency 14 times to challenge environmental rules, and couldn’t or wouldn’t name a single EPA rule he likes. His ties to oil and gas producers and the Koch brothers are notorious, and the donations he’s received from them have been bounteous. He sides with different kinds of polluters too, like the poultry industry.

In other cabinet news, Trump’s nominees for two more environment-related jobs — Rep. Ryan Zinke for interior secretary and Rick Perry for energy secretary — are expected to sail through confirmation once they get squeezed onto the Senate calendar. They will join a host of other climate deniers in the Trump cabinet, including recently confirmed Attorney General Jeff Sessions and Health and Human Services Secretary Tom Price.

How much does it matter? Pruitt’s confirmation is a huge deal. The EPA is responsible for implementing federal laws that protect air and water, and determining what the latest science tells us about protecting human health. If Pruitt refuses to implement those laws or consider that science, the environment will get dirtier and Americans’ health will suffer. Which leads us to …

Something wicked this way comes:
Trump poised to bludgeon the EPA

What happened? The Trump team told EPA officials this week that the president is planning to sign executive orders to revamp the agency and curb its work on climate change. He’s just been waiting for Pruitt to be confirmed. As soon as next week, Trump is expected to hold a swearing-in ceremony for Pruitt at EPA headquarters and sign the orders, which may include one related to the State Department and the Paris climate deal. The orders could “suck the air out of the room,” a source told Inside EPA. And the agency is already gasping for breath. EPA Acting Administrator Catherine McCabe said on Tuesday that Trump’s federal hiring freeze is “creating some challenges to our ability to get the agency’s work done.”

How much does it matter? A ton. Reversing progress on climate change in particular will have massive, global impacts. If, as expected, Trump kills Obama’s Clean Power Plan, the U.S. will be unlikely to meet its emission-reduction pledge under the Paris deal, and if the U.S. flakes, other countries are more likely to flake on their pledges, too. If Trump tries to pull out of or undermine the Paris Agreement, the repercussions will be even bigger.

If you build it …
Full speed ahead on Dakota Access

What happened? Construction started up on the controversial segment of the Dakota Access Pipeline last week, after the Trump administration officially granted an easement for the pipeline to be built on federal land. The disputed segment will run underneath Lake Oahe, a reservoir in North Dakota near the Standing Rock Sioux Reservation. The Sioux and environmental allies have been trying various legal challenges to stop the construction, but none have worked so far and they’re increasingly looking like long shots. The pipeline could be completed and pumping oil by June 1.

Meanwhile, the company that wants to build the Keystone XL Pipeline is also moving forward. Obama rejected the proposed pipeline in fall 2015, but Trump encouraged pipeline builder TransCanada to revive the project. On Thursday, the company made a step in that direction, applying to a Nebraska commission for approval of its proposed route through the state.

Trump said last week that his pipeline moves must not have been controversial because he hadn’t gotten a single phone call in opposition. Perhaps that’s because the White House wasn’t picking up the phones.

How much does it matter? A lot. Both pipelines pose local environmental risks and global climate threats, but more notably, stopping them had become a cause for the climate and environmental justice movements to rally around. Activists aren’t giving up, though: They’re continuing to fight both projects and ramping up battles against other pipelines around the U.S.

What happened? The House has been swiftly and giddily voting to repeal Obama-era environmental regulations, and the Senate has been following suit at a slightly slower pace. This week, Trump signed two of those rule revocations into law. The first one was a gift to Secretary of State Rex Tillerson and his oil industry buddies; Trump did away with a rule that had required oil, gas, and mining companies to disclose any payments they made to foreign governments, with the aim of curbing corruption. The second was a gift to the coal industry; now mountaintop-removal mining companies will again be free to dump their waste into streams. And thanks to a provision in the law Congress used to make these repeals, the government is banned from issuing substantially similar regulations in the future.

The Trump administration has also delayed some regulations that the Obama team had put in place, including one to add the rusty patched bumble bee to the endangered species list.

How much does it matter? Some. We’ll now see more corruption in developing countries and more pollution in coal-mining communities. Trump may next sign repeals of regulations on methane leaks and public participation in land management. But the real danger is still to come. As Juliet Eilperin recently reported in the Washington Post, “Trump has embarked on the most aggressive campaign against government regulation in a generation.” We ain’t seen nothing yet.

On that note, have a happy long weekend!