The Trump administration axed climate change from its national security strategy, with huge implications for how America adapts to the threats of a warming world. But that’s not the only way we’re seeing the environmental fallout of Trump’s national security agenda.

Along our borders with Canada and Mexico, conservation and climate justice fights are getting tangled up with national security interests. To the south, Trump’s proposed wall threatens dozens of endangered species, like the Mexican gray wolf. And in the north, Canada’s purchase of the Trans Mountain Pipeline hinges in part on a U.S. assessment of national security threats.

The Department of Homeland Security essentially has a get-out-of-federal-law pass that allows them to ignore environmental regulations. In the case of the border wall, the department can move forward with construction without an environmental impact analysis and won’t be subject to following the Endangered Species Act or National Environmental Policy Act.

This capacity to be above the law has enormous impacts for the survival of species found along the U.S.-Mexico border. Leading scientists, including Paul Ehrlich and E.O. Wilson, published an article on the dangers in the journal BioScience last week. More than other 2,500 other scientists signed onto a call to action urging Homeland Security to follow federal law, evaluate the environmental impact of its border wall, and take action to mitigate the harm. 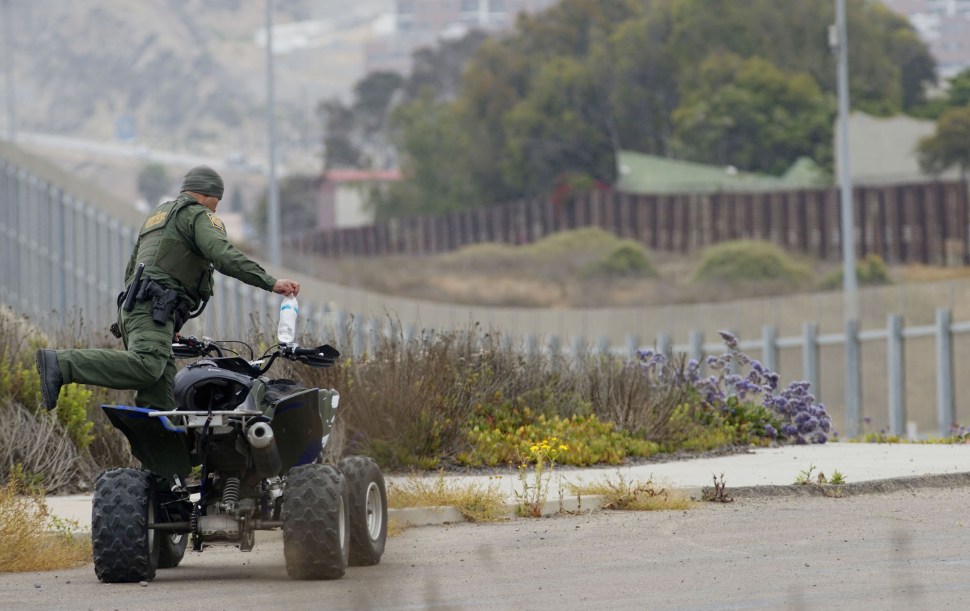 The wall would restrict the movement of communities and scientists working on conservation on both sides of the border, says lead author Rob Peters. Beyond the human angle, “any sort of barrier to the free movement of animals is a threat to their existence,” Peters says. “The borderlands are not the empty wastelands that so many people think they are. They’re incredibly rich in biodiversity.” According to the report, the wall would impact up to 62 species listed as critically endangered, endangered, or vulnerable by the International Union for Conservation of Nature.

Meanwhile, up north, it’s now up to federal authorities, with Trump making the ultimate decision, to allow or veto Canada’s purchase of Kinder Morgan’s TransMountain Pipeline.

Kinder Morgan halted non-essential spending on the pipeline expansion this spring and was ready to drop the project completely. That’s when the Trudeau administration announced it was going to foot the bill to keep the flailing project alive.

So, why does that require Trump’s approval? Canada’s purchase of TransMountain includes the acquisition of an offshoot pipeline: the Puget Sound Pipeline, which moves oil from British Columbia to Washington state. As a result, the deal can’t move forward without national security clearance from the U.S. Committee on Foreign Investments. It’s also subject to review by the State Department, which issues presidential permits for cross-border liquid pipelines.

Normally, those procedures are pretty cut-and-dry. But under the Trump administration, experts say, anything goes. “Once upon a time, there was a set of regulations that could tell you more or less what the considerations were. I don’t think those are operative at all right now,” says Tom Sanzillo, director of finance at the Institute for Energy Economics and Financial Analysis. “I think whatever the president wants he’ll do,” Sanzillo says.

In its 2017 National Security Strategy, the Trump administration mentions streamlining federal approval of pipelines as a good thing for Americans. But these are weird times; trade tensions and Trump’s fighting words with Trudeau over the summer could make the U.S. president an unlikely trump card for those hoping the pipeline deal will die.

There are legitimate concerns about Canada owning a slice of American energy infrastructure, according to Clark Williams-Derry, director of energy finance at Seattle-based think tank Sightline Institute (Williams-Derry was also the webmaster for Grist back in 1999). “This is the only case for a foreign government to outright own a U.S. pipeline. It’s a little bit unsettling,” Williams-Derry says.

If Trump decides he doesn’t want to Canada to have the Puget Sound Pipeline, it would deal a significant blow to the Kinder Morgan Deal. But both Williams-Derry and Sanzillo say that although it would further delay the Trans Mountain Pipeline expansion, it wouldn’t altogether kill it. With $3.5 billion on the line, Kinder Morgan and Trudeau’s government could find a way to take the Puget Sound Pipeline out of the deal in order to bypass U.S. intervention on the purchase.

And if the pipeline expansion is successful and leads to significantly more crude oil pumping out of Alberta’s tar sands, there’s another huge threat to consider: “Climate change is certainly a threat to national security,” says Williams-Derry. “If a hostile foreign power said, ‘We’re going to devastate Miami or we’re going to increase the chance of a major incident on the Gulf Coast,’ we would say, ‘No way. Absolutely not.’”

And climate change is a concurrent threat for species at the border. The wall would hamper their efforts to adapt, especially in places like in the Southwest where animals may migrate to cope with drought. “We can’t say exactly how [climate change] is going to affect them,” says Rob Peters. “But we sure as hell can say it ain’t going to be good.”

Trump has no standards when it comes to vehicle emissions