The editorial page of The Wall Street Journal is notorious for its climate denial. It frequently publishes opinion pieces like this one comparing climate activism to the Inquisition, or this one arguing that the evidence of climate change is based on faulty data.

But the page is willing to print other views — for a price.

The Washington Post reports that The Wall Street Journal is running a series of 12 ads on its editorial page from the Partnership for Responsible Growth, a group advocating for free-market solutions to climate change, specifically a fee on carbon-fuel producers. The first ad, which ran in today’s paper, targets the Journal itself: “Exxon’s CEO says fossil fuels are raising temperatures and sea levels,” it reads. “Why won’t The Wall Street Journal?” 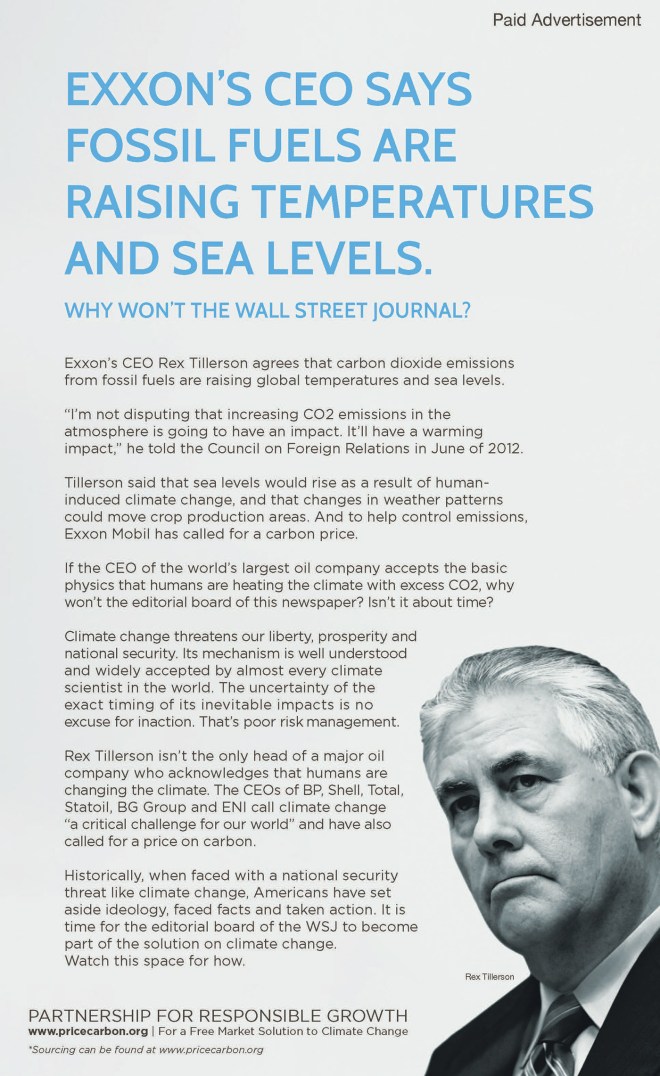 As part of this campaign, the Partnership for Responsible Growth analyzed 201 Journal editorials dating back to 1997, and found that not a single one acknowledged that fossil fuels cause climate change. What they did do is consistently minimize the scientific consensus that burning fossil fuels is heating the planet, as well as use terms meant to denigrate climate action, characterizing climate science as the “church of climatology” and “the new religion on the left.”

The group’s founder, George Frampton, told the Post that the Partnership for Responsible Growth is trying to reach the business community that reads The Wall Street Journal. So, he says, “if the Journal won’t cover it, we’ll pay to have them cover it.”

Your food is better traveled than you are