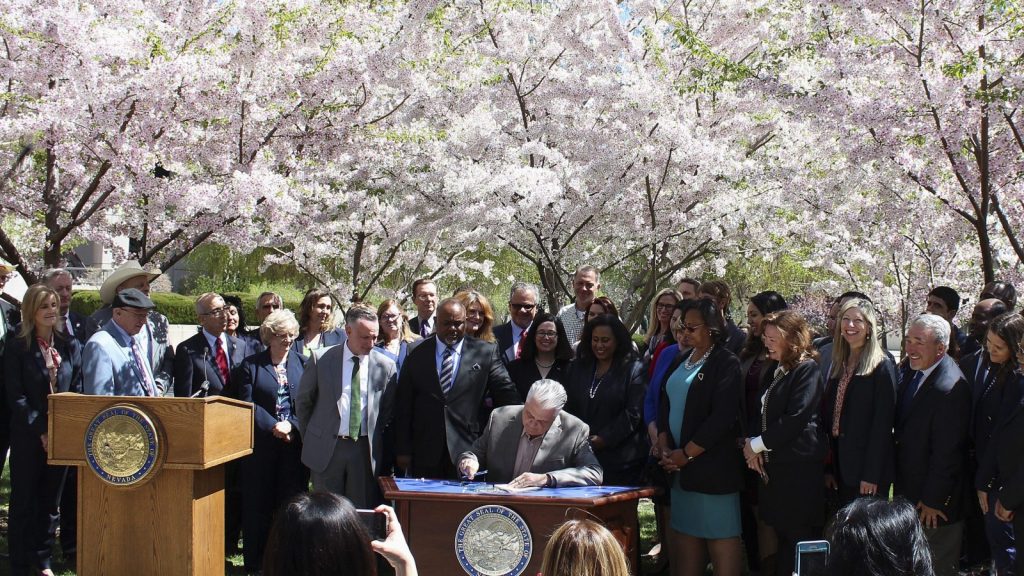 The peer pressure to clean up the electric grid is gripping the country.

Recent weeks have brought a flurry of ambitious clean-energy pledges. On Earth Day, Nevada’s governor signed into law a measure banning fossil-fuel generated electricity by 2050. Washington’s legislature just sent a bill to Governor Jay Inslee (the presidential contender) that would have the Evergreen State running on purely carbon-free electricity by 2030. Last month, New Mexico committed to 100 percent clean electricity by 2045. California, Hawaii, Washington D.C., and Puerto Rico, passed similar laws a bit further back. There are similar bills pending in Illinois, Minnesota, New York, New Jersey, Virginia, Florida, and Massachusetts. And don’t forget the 100-odd cities —  from Orlando, Florida to Pueblo, Colorado — that have vowed to kick their fossil-fuel addiction.

It’s a seismic shift from the 1990s and 2000s, when states made goals to get get a certain share of their electricity from renewable power. Those laws were designed to help the nascent renewables industry find its footing, Freed said. Now that the industry is up and running, “the next question is, how do we get carbon off the grid?”

That’s why everyone seems to be excited about the same goal. And this isn’t just the flavor of the month — there’s a good reason to focus on a carbon-free electric system. Though there are still hurdles to leap, states basically know how to eliminate emissions from the electrical grid, said Mike O’Boyle, head of electricity policy at the think tank Energy Innovation in San Francisco. You can’t say the same about eliminating emissions from air-travel or concrete production, at least not yet. So squeezing the greenhouse gases out of electricity is a clearly achievable goal. And there are beneficial knock-on effects: It paves the way to clean up transportation (by switching to electric vehicles) and buildings (by switching to electric heating and cooling).

“It think its a robust and meaningful trend,” O’Boyle said. “A lot of gubernatorial candidates, and presidential candidates, have campaigned on 100-percent clean electricity. It’s become part of the conventional wisdom that it’s a realistic and effective policy goal.”