This week, breathing in Seattle air was the equivalent to smoking around a third of a pack of cigarettes a day, thanks to smoke from wildfires raging in Canada and the Cascades. On Monday, air quality in Spokane was the worst in the country, forcing people to don masks or stay inside. You know what they say: Desperate times call for desperate measures. Rather than wait for the interminable smoke to dissipate, some Washington residents elected to take matters into their own hands.

One Spokane Facebook event implored its nearly 2,000 attendees to: “Blow Spokane’s Smoke Back to Canada.” “To get rid of this smoke, we have to work together as a community,” the event’s description says. “After much deliberation and mathematical calculation, we have figured that it is absolutely possible for us to blow this smoke away with high powered fans.” 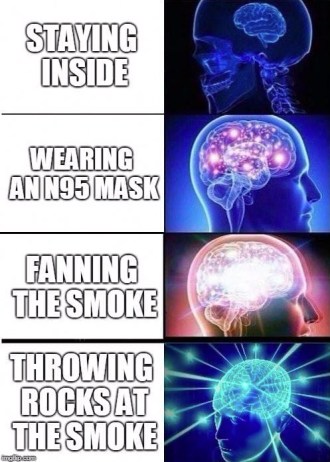 The haze may be thick and disorienting, but Spokanites know a couple thousand box fans can’t reverse the smoky effects of decades of forest mismanagement and rising temperatures. That didn’t stop them from taking credit, though, when the smoke finally started to lift on Thursday morning. “IT IS WORKING!!!” wrote one resident, adding: “KEEP PUFFING AND BLOWING, AND THANK YOU!!!”

Another Facebook event with over 43,000 attendees had a similar idea: Throw rocks at the smoke. “I strongly believe with enough rocks, we can make the smoke leave,” the event organizer wrote. Yet another page suggests positioning a giant fan over the state of Idaho. All of these satirical events promote ways to donate to B.C. food banks, animal shelters, and the Red Cross.

I asked my friend Alexandru Oarcea, who’s a hotshot firefighter with the U.S. Forest Service, about the box fan plan. He thought it was cute but pointed out a major flaw: “If, by some miracle they were able to create enough wind to start to push it to Canada, it would just suck the smoke from Oregon and California in behind it.”

Bigger, stronger, rainier: Is Hawaii’s Hurricane Lane a sign of what’s to come?