There’s good news and there’s bad news: More Americans are concerned about climate change now than at any time in the past eight years. But that’s because the consequences are getting harder to ignore.

According to a Gallup poll conducted in early March, 64 percent of Americans are worried about climate change a “great deal” or a “fair amount.” This is quite a jump over last year’s 55 percent. 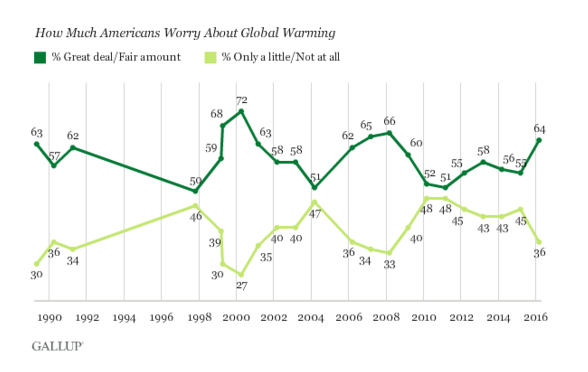 However, as you can see from the graph above, the percentage of concerned citizens varies widely from year to year, and it actually peaked in the year 2000. What was going on in 2000? Well, the dot-com bubble burst, the Yankees won the World Series, yours truly finally cut off her ill-advised white-person dreadlocks, and — perhaps most notably — climate hawk Al Gore was running for president. So, big year. What followed was the Bush presidency, 9/11, the American invasions of both Iraq and Afghanistan, and steep declines in concern about climate change. Concern hit a low point in 2004, before rebounding for the next four years, starting right around the time Hurricane Katrina hit New Orleans, Gore’s An Inconvenient Truth came out, and “Drop It Like It’s Hot” hit the airwaves.

Again, concern rose for the next four years, before dropping steeply and staying low until this year. What gives? Gallup has a theory:

A confluence of factors — the economic downturn, the Climategate controversy and some well-publicized pushback against global warming science — may have dampened public concern about global warming from about 2009 to 2015. However, Americans are now expressing record- or near-record-high belief that global warming is happening, as well as concern about the issue. Several years of unseasonably warm weather — including the 2011-2012, 2012-2013 and 2015-2016 winters — has potentially contributed to this shift in attitudes. If that’s true, continuation of such weather patterns would likely do more than anything politicians and even climate-change scientists can to further raise public concern.

In short, more people care about climate change now than they have in a long time. This probably has something to do with the fact that the effects of climate change are becoming increasingly apparent. From record-breaking wildfire seasons to the warmest year on record to the California drought to epic flooding in the South, it’s getting harder and harder to pretend that climate change isn’t already affecting us. The majority of us are paying attention.