We need to talk about palm oil 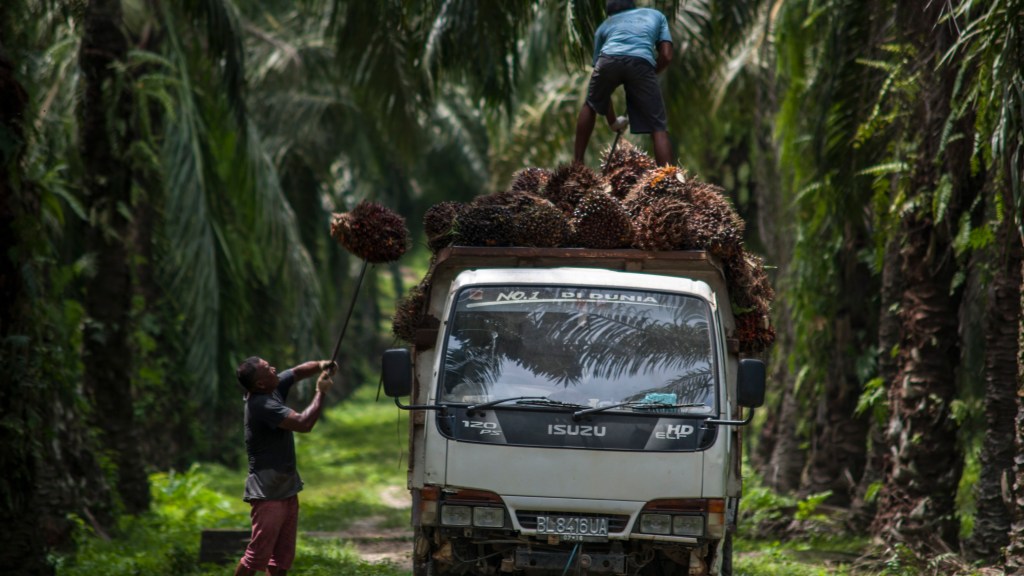 We need to talk about palm oil

We wash our hair with it, brush our teeth with it, smother our skin in it, and use it to powder our cheeks, plump our lashes, and color our lips. We clean our houses with it, fuel our cars with it, and eat it in chocolate, bread, ice cream, pizza, breakfast cereal, and candy bars.

Palm oil: You may never have walked into a supermarket with it written on your shopping list, but you’ve certainly walked out with bags full of it.

An extremely versatile ingredient that’s cheaper and more efficient to produce than other vegetable oils, palm oil is found today in half of all consumer goods including soaps and toothpaste, cosmetics and laundry detergent, and a whole array of processed food. Palm oil is also found in biodiesel used to power cars (more than 50 percent of the European Union’s palm oil consumption in 2017 reportedly went to this purpose).

Our modern lives are inextricably intertwined with the commodity, which can appear on ingredient labels under a myriad of alternative names including sodium lauryl sulphate, stearic acid, and palmitate. But activists warn that our insatiable demand for palm oil has fueled one of the most pressing environmental and humanitarian crises of our time.

The equivalent of 300 football fields of rainforest is destroyed every hour to make way for palm oil plantations, according to the Orangutan Project. This rampant deforestation — which has occurred in some of the world’s most biodiverse hot spots, mostly in Indonesia and Malaysia — has decimated the habitat of endangered species like orangutans and Sumatran tigers, displaced indigenous communities, contributed to a regional smog problem linked to tens of thousands of premature deaths, and is a significant driver of climate change.

This commercial was banned from TV for being too political. I think everyone should see it x pic.twitter.com/ns2XnGSnv6

Last month, palm oil and its impacts became the story of the hour when the U.K. banned a stirring ad about the commodity from TV broadcast. The ad, which featured an animated orphaned orangutan and was released by British grocery store Iceland, was deemed too political for television. The ban triggered a flurry of interest and outrage worldwide.

“There’s been a huge spike in awareness about palm oil because of the Iceland ad,” said conservationist and Mongabay.com founder Rhett Butler, who’s been monitoring trends in the palm oil industry for years. “It was quite astonishing actually. It seems like global interest in this issue is at an all-time high.”

But this spotlight on palm oil has revealed a troubling stagnation of the industry’s progress in tackling the environmental and human rights issues that have dogged it for years.

On the surface, significant progress appears to have been made since the early 2010s: Public awareness of the palm oil crisis has significantly increased; some of the world’s largest producers and buyers of palm oil have made very public and very lofty sustainability and human rights commitments; and governments — notably Indonesia’s — have vowed to do more to protect the people, species, and habitats exploited by the palm oil industry.

Yet, in spite of all this, “unfortunately from an environmental perspective, not a lot has changed,” Butler said.

Deforestation is still occurring at an alarming rate in Indonesia and Malaysia, which supply about 85 percent of the world’s palm oil. A September Greenpeace investigation found that more than 500 square miles of rainforest — about the size of Los Angeles — had been cleared in Indonesia, Malaysia, and the neighboring nation of Papua New Guinea for palm oil production since the end of 2015.

According to the Greenpeace report, 12 of the world’s largest brands including Nestle, General Mills, Kellogg’s, Colgate-Palmolive, PepsiCo, and Unilever continue to source palm oil from producers and growers that were found to be “actively clearing rainforests” — despite the “zero-deforestation” commitments that these companies have made in recent years.

“We’re consuming their products on a daily basis,” said Annisa Rahmawati of Greenpeace Indonesia, according to Mongabay.com. “So we’re … indirectly [participating in these] deforestation and human rights violations.”

Some companies including Unilever and Nestle responded to the Greenpeace report by reiterating their sustainability commitments. “Our ambition is that by the end of 2020 all of the palm oil that we use is responsibly sourced,” Nestle said on its website.

“Greenpeace rightfully addresses serious and systematic issues that we know are fundamentally broken in the palm oil supply chain,” Unilever noted in a statement, adding that the company is “actively driving change in both our own operations and across the industry.”

This summer, Wilmar International, the world’s largest palm oil trader, was embroiled in controversy after its billionaire co-founder Martua Sitoris was accused of running a “shadow company” with his brother that had cleared an area of rainforest twice the size of Paris since 2013 — the same year that Wilmar had promised to work toward “no deforestation” and “no exploitation” in its supply chain.

Sitoris was forced to resign in the wake of the allegations, and Wilmar — which controls almost half of the world’s trade in palm oil — vowed this month to strengthen its sustainability policy.

“Wilmar’s [scandal] makes abundantly clear that these companies cannot be trusted to police themselves,” said Tomasz Johnson, head of research at Earthsight and founder of The Gecko Project, speaking from London last week.

Emma Lierley, forest policy director at the Rainforest Action Network (RAN), echoed this sentiment. “The same problems are still happening in this industry,” she said. “Deforestation is continuing, threatened species are still being put at risk, and there’s evidence that labor abuse including child labor and forced labor are still commonplace across plantations in Malaysia and Indonesia — and all of this is happening despite corporate policy changes.”

“Corporate policy is all well and good but it has to be worth the paper it’s written on,” Lierley added. “We’re just not seeing that real change taking place.”

And the clock, she warned, is ominously ticking: The palm oil industry is causing potentially irreparable damage to the planet — and its climate — and if we don’t take prompt and comprehensive action, the outcome could be catastrophic.

“What a lot of people don’t realize is how much of an impact palm oil has on our future climate stability,” Lierley said.

Palm oil cultivation is currently conducted disproportionately in high-carbon areas like tropical forests and carbon-rich peatlands. When these areas are deforested to make way for plantations, enormous volumes of climate-warming gases are released into the atmosphere.

It’s estimated that tropical deforestation is responsible for between 15 and 20 percent of global warming emissions — more than the emissions from cars and other forms of transportation.

Indonesia’s peatlands alone now release more than 500 megatons of carbon dioxide every year — an amount greater than California’s entire annual emissions, The New York Times reported in November. And the deforestation of Borneo, an island shared by Indonesia, Malaysia, and Brunei, has contributed to “the largest single-year global increase in carbon emissions in two millenniums,” the paper said, citing NASA research.

Palm oil plantations are the main driver of deforestation on Borneo, which has lost more than 16,000 square miles of ancient rainforest — and critical habitat for a wide variety of creatures — because of the commodity. Almost 150,000 critically endangered Bornean orangutans were killed between 1999 and 2015, partly because of palm oil.

“Scientists have warned us that we have just 12 years to avert the worst effects of climate change,” Lierley said, referring to a grim United Nations report released in October. “The stakes are incredibly high. A lot of people are trying to pass the buck in the palm oil industry, but we need to see really bold action from companies all along the supply chain, as well as government actors and other institutions.”

This is particularly pressing given the expected ballooning of demand for palm oil in the coming years. The Center for International Forestry Research estimates that world consumption of palm oil will increase by 62 percent in a “medium growth scenario” and 94 percent in a “high demand scenario.” Other countries, particularly in Africa, are expected to see a boom in palm oil production to meet this growing demand.

Johnson, who for years has been investigating corruption in the palm oil industry, warned that the same broken agri-industrial model of palm oil production in Indonesia and Malaysia is already being replicated in parts of Africa.

“The same palm oil companies that have been operating in Indonesia have announced plans in recent years to do the same” in countries like Liberia and Uganda, said Johnson. “And you could just see the disaster slowly unfolding.”

Companies like Wilmar and the Malaysian conglomerate Sime Darby have been granted enormous concessions, or cultivation areas, for palm oil in these countries — and reports have already emerged of deforestation and land-grab issues.

“Many of these countries are fragile, post-war states,” said Johnson of the African nations where the palm oil industry has been steadily encroaching. “If these [companies] aren’t even following the rules properly in Indonesia,” where President Joko Widodo has taken steps to crack down on conflict palm oil, “what’s the chance they’ll do things better in these fragile states?”

The problems with palm oil may feel complex and entrenched, but activists insist that solutions are within reach.

Though reducing consumption of palm oil could be a positive step, boycotting the commodity entirely doesn’t appear to be the answer. Producing alternative vegetable oils like soybean would have similar, or even worse, environmental impacts, Lierley noted.

“It’s not palm oil itself that’s the problem,” she said. “It’s the way it’s produced.”

And that, activists say, is what needs to change.

Consumers should push companies to be more transparent about where their palm oil is coming from, said Mongabay.com’s Butler.

“Look at the ingredient lists on the things that you are buying and figure out what products actually contain palm oil,” he said. “Then contact the company and ask them what their palm oil policy is. It doesn’t actually require that much feedback from consumers to send a strong message to a company.”

Companies, in turn, need to be more transparent about their practices, Johnson said.

“If they want to be trusted, they need to put everything on the table, they need to be as transparent as humanly possible and people need to be watching them closely. If not, we’re just going to see more ‘zero deforestation’ companies buying from dodgy suppliers,” he said.

Consumers can use their dollars to support companies that have made — and fulfilled — sustainability commitments. The “bare minimum,” said Butler, is to choose companies and brands that are certified by the RSPO, or the Roundtable on Sustainable Palm Oil.

The RSPO, which is the world’s leading certification body for sustainably sourced palm oil, has been widely criticized in the past for not setting high enough standards for its members and for inadequately enforcing its rules. Last month, however, the group significantly strengthened its criteria — a move lauded by activists.

WWF, RAN, and the Union of Concerned Scientists have palm oil scorecards that track how some of the world’s biggest companies and brands are faring when it comes to sustainable palm oil.

“Companies often say it’s a lack of resources or lack of information that make it difficult for them to fulfill their sustainability commitments. But if a small nonprofit like RAN can identify labor abuses, deforestation, and land-grab issues, there’s no reason why a huge multinational can’t do it too,” Lierley said.

“It’s not an impossible problem,” she continued. “It’s a matter of willpower.”