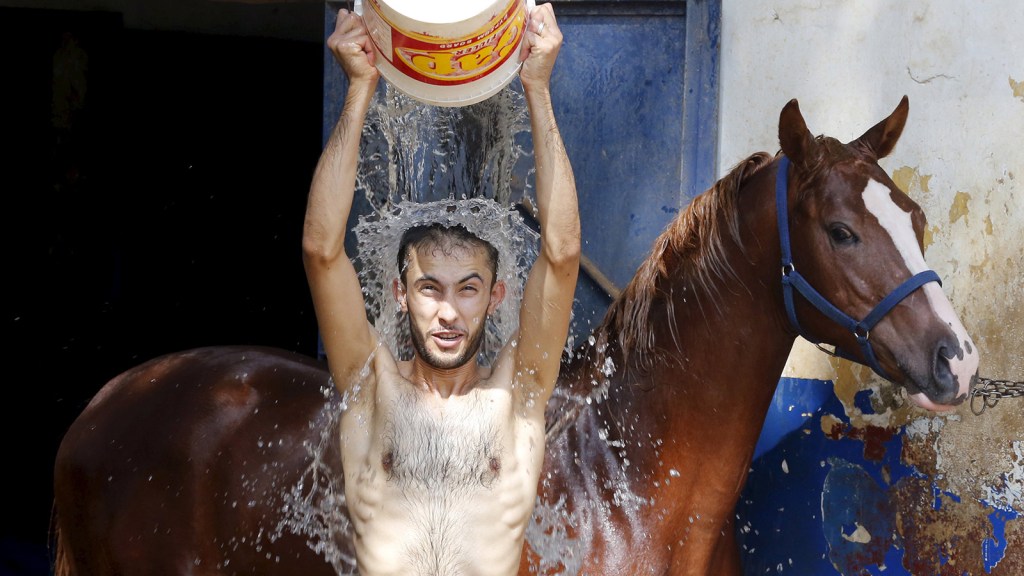 A man pours water over himself while washing a horse in order to cool it down as part of measures taken to ease the effect of a heatwave at the Beirut Hippodrome, Lebanon August 4, 2015. Reuters/Mohamed Azakir
Climate & Energy

Think it’s hot where you live? That’s nothing compared to what’s happening in the Middle East.

On one of the hottest days in recorded human history, the heat index in Bandar Mahshahr, Iran, reached an ungodly 165 degrees last week. One hundred and sixty-five degrees. That’s exactly twice as hot as Seattle’s average high temperature last month — and July was Seattle’s hottest month ever.

In Iraq, electricity shortages have made what is normally a difficult season unbearable. Susannah George, a reporter in Iraq, wrote this in an email:

Almost everyone in Iraq has an air conditioner or an air-cooler (I think Americans call them ‘swamp coolers’) — even families living in refugee camps. The summer is intolerable without it, which is why people are so upset about the electricity shortages. During the day, the cities really quiet down, most people just stay indoors. But to give you an idea of the temps, the Internet was out for a lot of the day today and it was blamed on overheating cables (although who knows if that’s true).

In Beirut, 500 miles to the west, it’s both scorching and stinky, as landfills are full and mountains of garbage are being left to rot in the street. Plus there’s the power outages to deal with: Food rots in fridges, morning showers cause first degree burns, and it’s literally as hot as a sauna. Kareem Shaheen described the situation in The Guardian:

The summers are especially frustrating because of the city’s ailing infrastructure. In Beirut, there are daily scheduled three-hour power cuts (there’s even an app that tells you when it’s happening in your neighbourhood) because the demand for power exceeds the supply year-round. At the height of the summer, these power cuts come every hour, or every two. The norm in some of the poorer areas of the city is the absence of electricity. You could perhaps sleep on the tiles, or on the terrace outside.

How do humans survive in this kind of heat? Can you even breathe?

You can, but it’s not easy. Albert Rizzo, senior medical adviser to the American Lung Association, told Discovery News, “Ozone has almost like a sunburning effect on the airways of the lungs. That tends to make the airways sometimes inflamed. They tighten up, so it becomes harder to get the air in and out.” And that’s for people who don’t have conditions like asthma, pulmonary disease, or emphysema.

If you don’t suffocate, there are other ways to the heat could kill you: Your cells become damaged, your blood starts to thicken, and your organs shut down. According to Discovery, between 1979 and 2003, heat exposure killed more people in the U.S. than hurricanes, lightning, tornadoes, floods, and earthquakes combined. It’s worse in countries plagued by poverty and infrastructure challenges. In Pakistan, more than 1,200 people have died in this summer’s heatwave; in India, more than 1,100 have perished.

Is climate change to blame? It’s difficult to attribute any one weather event to climate change, but we do know that from Seattle to Pakistan, the world is getting hotter, and as that happens, more and more people will suffer. The record-breaking summer of 2015 is just the beginning.