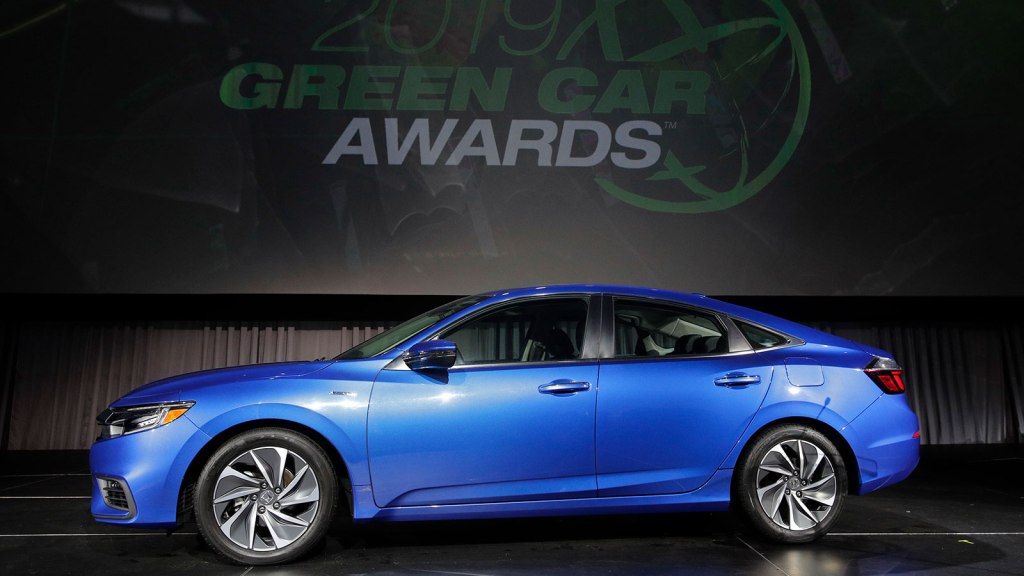 AP Photo / Jae C. Hong
Are we there yet?

If you ask anyone about the future of the auto industry, it’s all about electrification, ride sharing, and autonomous driving. But in the short-term, at least for automakers, it’s pure anxiety.

Not only did General Motors recently reveal plans to discontinue six of its car models by the end of 2019 (including its groundbreaking plug-in hybrid, the Chevrolet Volt. It will continue to offer its all-electric Bolt, which is an alternative to to Tesla’s Model 3*), the Trump administration announced earlier this week that it intends to end automaker subsidies for electric cars after 2022. If pleasing the consumer weren’t enough, now car manufacturers have to worry about a president who clearly doesn’t grasp the complexities of their industry.

Caught between the consumer demands of today and the technology of tomorrow, American auto manufacturers are being pulled in two very disparate directions. Case in point, The Los Angeles Auto Show, which kicked off this weekend to packed crowds, has come to be about two, at times, contradictory concepts: luxury and the environment.

Finally for those awaiting an electric car that doesn’t look like a science experiment, there’s the Range Rover Plug-in hybrid, Jaguar I-pace (a hybrid SUV), and BMW i8 Roadster and Convertible. Despite the death of the Chevy Volt, nearly every manufacturer is making some sort of entry into electric vehicles, meaning there is more room for fun. EVs aren’t just econo-boxes anymore; the technology is reaching into all aspects of the auto industry, which offers (greener) hope for their future.

In the meantime, however, American car companies still rely heavily on sales of pickup trucks and SUVs. In recent years the balance in the car world has shifted from passenger sedans to SUVs and pickup trucks. When General Motors recently announced it was restructuring, laying off nearly 15 percent of its salaried employees and changing its production offerings, it wasn’t so much an industry shake-up as an aftershock. Ford and Chrysler have largely abandoned sedans, GM is the last of the big American carmakers to make the move.

So how can industry aficionados pursue both what we want (SUVs) and (what we need) new electric options, both snazzy and standard?

The L.A. auto show says as much about the city as it does the state of the industry. The City of Angels is one of the biggest and most important car markets in the U.S., and what happens at this auto show has consequences. As someone who’s been covering the industry for nearly a decade, there’s a lot on display beyond the shiny coats of wax and ginormous red bows.

Here’s what the auto show’s offerings say about the future direction of the auto industry:

SUVs are getting greener

In the U.S., more SUVs and pickup trucks are sold than cars. But that doesn’t necessarily mean people want to drive gas-guzzlers. Consumers are flocking to more fuel-efficient crossover SUVs, such as the Honda CRV. Companies such as Volvo are introducing hybrids, and Kia unveiled its Niro EV. SUVs are getting more fuel-efficient, though three-row SUVs are showing no signs of going away — Ford’s Lincoln brand debuted a new Navigator and BMW showed off its xDrive40i model.

At a time when other automakers are turning out new hybrid models, what are we to make of GM putting the Volt on the chopping block? It’s not the first time the car company has done away with its electric vehicle offerings. (GM killed the EV-1 back in the ‘90s, then introduced the Volt in 2011.)

Environmentalists have long worried carmakers would abandon electric vehicles due to lagging sales (as they have before). And despite all the space on the show floor for electric cars, U.S. consumers have still not embraced them. Without the federal government incentivizing EVs, you’d expect carmakers to be running in the other direction.

But the good news is even if the current administration isn’t interested in the electric vehicles, California, China, and European nations surely are. China has followed the Golden State’s lead in pushing hard for electric vehicles. Air quality in China is an important political issue. On a tour I took of Chinese manufacturers last year, officials admitted that party leaders feel popular opinion about the environment could threaten their hold on power.

Because of the Chinese and European commitments to electric vehicles, the global market for EVs doesn’t appear to be facing extinction. But despite Tesla’s popularity, EV sales are not what they need to be domestically to make them major market winners.

Vehicles are getting more autonomous and more craaaazy

Veteran car journalist Jean Jennings told me, with a bit of regret in her voice, that the future of the industry is “shared rides, electric cars, and autonomous.” In many ways Jennings says the work that it’s going to take for GM to get to a cleaner, safer, profitable future demands rethinking how the cars are made — and that mean no driver instead of no gas.

A person driving a 2003 Honda Civic would barely recognize the driver-assist technology of today like automated braking and adaptive cruise control. Now, the most exciting tech geared toward driver-assist includes I-can’t-believe-it’s-not-magic features that allow a driver to essentially see through the engine block (making parking easier), and map-the-city visualizations that use the pipes and wires under the road to help autonomous vehicles find their way.

California’s Air Resources Board, soon to be led by California Governor-elect Gavin Newsom, is expected to fight a long battle with federal regulators to preserve the right for the state to set tougher emissions standards than the rest of the country. Trump being in office might seem like an opportune moment for the auto industry’s air quality standards to relax significantly; but China is the market driving these regulations now, and people there really care about air quality.

Politics and the auto industry typically do not mix well

The talk of this auto show was GM, in part because so many GM workers at the show only have months left at their jobs. It was these job cuts, after a bailout from taxpayers, that drew the ire of President “Tariff man” Trump, whose threats to discontinue electric car subsidies have not played well with industry professionals.

President Trump isn’t the first politician to try to use auto executives as a convenient punching bag. CEOs of car manufacturers haven’t done themselves any favors by, say, opposing airbags and fuel economy standards in the past. But this administration’s public feud is causing major road burn in the industry — and not only for GM. If the president intended to punish the Detroit-based company, he failed to grasp an important part of the electric vehicle rules from the Obama era: Because GM got in early on plug-in electric vehicles, it’s already used up most of its federally backed incentives to sell electric cars. (And its credits drying up is what made the Volt expendable.

Buckle up, because auto trends are part of a cycle

If the future of the industry were a race, it’d be the Indianapolis 500: fast and circular. Take GM’s cuts: The auto industry is cyclical, and layoffs are no surprise. Reshaping the current GM line-up also seems to this reporter (the child and grandchild of auto workers) to be a part of that cycle.

What’s interesting to me about this auto show is the feeling of déjà vu. American car makers are turning away from sedans, just as they did in the early 2000s The shift may not be forever — especially considering that some companies, such as Honda, are investing MORE money in its small cars. As Honda executive Sage Marie pointed out, the company is both investing in sedans and looking to emerging markets, while the American car companies stay wedded to pickups.

So when it comes to predicting the future of the auto industry, don’t get trapped by what’s just around the bend. Automakers are still, in general, looking toward a greener future… but there might be a few pit stops along the way.

*Correction: A previous version of this story stated the Chevrolet Volt was General Motors’ only electric vehicle offering.