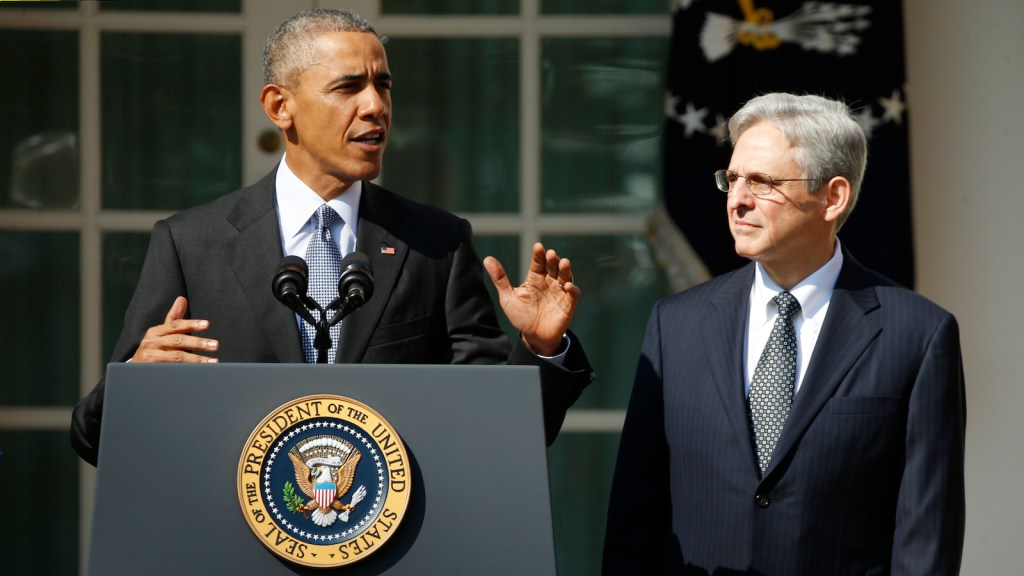 President Obama is nominating former federal prosecutor and chief judge of the Court of Appeals for the District of Columbia Circuit Merrick Garland to fill the late Antonin Scalia’s vacant Supreme Court seat. In his Wednesday announcement at the White House, Obama emphasized that Garland is “is widely recognized not only as one of America’s sharpest legal minds but someone who brings to his work a spirit of decency, modesty, integrity, even-handedness, and excellence.”

Here’s what else we know:

Garland has spent most of his career in public service, and according to SCOTUSblog, his record shows that he is “essentially the model neutral judge.” This fun little New York Times graph shows Garland somewhere between Ruth Bader Ginsburg and Elena Kagan on the ideological scale; however, he appears to have some conservative tendencies when it comes to criminal justice, and as a federal judge he rarely voted in favor of criminal defendant appeals, according to ThinkProgress. Obama was likely seeking a nominee Republicans have supported in the past in the hopes their opposition now would look even more politicalized and extreme. In fact, seven sitting Republican senators confirmed him for the D.C. Circuit in 1997. Just one week ago, Senator Orrin Hatch praised Garland, calling him “a fine man.”  And as Ed Whelan — a former Justice Department appointee under George W. Bush — once said, Garland is “the best that conservatives could reasonably hope for from a Democratic President.”

But that doesn’t mean Republicans won’t fight the nomination anyway.

Republicans are planning to not even hold hearings for the nominee until after the election. They hope to win the White House and appoint a conservative judge, so they don’t care much how qualified the nominee may be. After Obama introduced an emotional Garland in the White House Rose Garden, Mitch McConnnell issued the Republican response, which was basically, “Hellllll no.” McConnell even referred to what he has cleverly named “the Biden rule,” a reference to Joe Biden’s 1992 statement that an outgoing president shouldn’t fill vacant Supreme Court seats. Hatch, a former Senate Judiciary chairman, issued a statement Wednesday, that Garland “is a good man, but he shouldn’t be brought up in this toxic environment,” adding, “I’d probably be open to resolving this in the lame duck.” Climate change-denying Sen. James Inhofe also got in on the action, tweeting, “While I will evaluate the nomination of Judge Merrick Garland, the next president should be the one to fill the vacancy on the Supreme Court.” No surprise there.

Greens can breathe easy. But not too easy.

Garland is an avid outdoor enthusiast, as President Obama mentioned in his speech — and if you appreciate nature, it seems like you’re more likely to want to save it, so that’s a good thing. Garland also wrote a 2004 D.C. Appeals Court decision ruling that, under the Bush administration, the EPA neglected smog standards as required by the Clean Air Act. That’s also a good thing. In addition, Garland was on the federal appeals court that upheld mercury and air toxics standards for power plants in 2014, which was a big win for the EPA (and the planet).

In 2010, amid rumors that he may be nominated for the Supreme Court, Tom Goldstein wrote for SCOTUSblog that Garland has often sided with the EPA over the course of his judicial career: “On environmental law, Judge Garland has in a number of cases favored contested EPA regulations and actions when challenged by industry, and in other cases he has accepted challenges brought by environmental groups.  This is in fact the area in which Judge Garland has been most willing to disagree with agency action.”

With Obama’s Clean Power Plan in the balance, this nomination is hugely important — which is exactly why Republicans in Congress will oppose him. And if they get their way, the closest Garland may get to SCOTUS robes is the coat check on visitor day.

As the Sierra Club wrote in a statement, “President Obama has done his job, now it’s time the U.S. Senate does its job by holding a hearing and a timely vote for this well-qualified, impressive nominee as soon as possible.”