Later this year, someone stopping to fuel up in North Vancouver will be the first customer to see the controversial warning labels. They’ll be wrapped around the gas pump handles. The exact wording isn’t settled yet, but here’s the gist of it: Every time you pump gas, you’re contributing to air pollution and climate change.

What will they look like? We don’t know that, either, but here’s one candidate considered by the city council that voted in the new warning-label law: 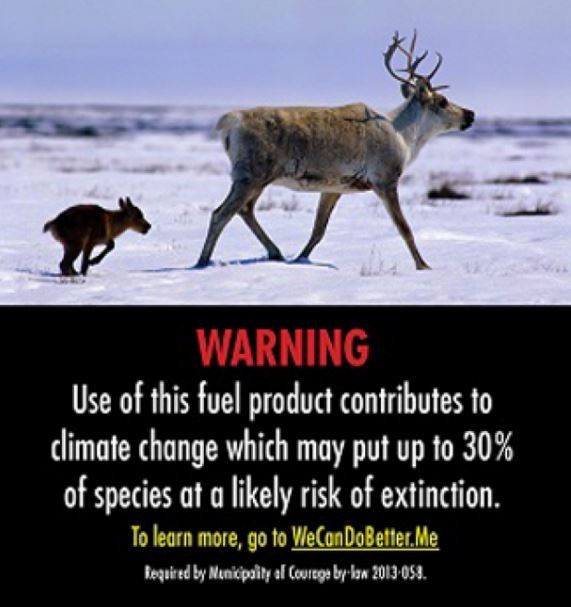 This label was developed by Robert Shirkey, a Toronto-based lawyer who has been obsessed with climate change for, as he put it, “as long as I can remember.” A few years ago, his grandfather told him to “do what you love,” then promptly died and left him with a small inheritance. Shirkey used the money to found Our Horizon, a nonprofit that functions as a one-stop shop for anyone curious about getting their local municipality to put climate change warning labels on gasoline pumps.

It might seem unfair to post labels at gas stations implying that individual drivers are guilty of nudging caribou closer to extinction. After all, lots of others are out there warming the troposphere: power plants, trucking, the military, you name it. Shirkey decided to focus on gas pump warning labels precisely because the responsibility for climate change is so diffuse. Unless you’re living some kind of Little House on the Prairie lifestyle, the energy that goes into heating your home and keeping you fed is invisible.

But the experience of fueling up is a real, gassy, in-your-face moment of personal responsibility. You can smell it. You have to pull levers to make it work. “There is nothing else,” Shirkey wrote, in an article for the amazingly named Municipal World magazine, “that currently connects us to the problems of climate change in such a direct way.”

Meanwhile, in West Vancouver, a teenager named Emily Kelsall heard Shirkey being interviewed on the radio on her way to school. In the same way that some sixteen-year-olds would travel from town to town for soccer matches, or to see punk shows at VFW halls, Kelsall began going from local city council to city council, proposing new legislation requiring gasoline warning labels.

The push to label gasoline pumps is also a reminder of just how much the movement to educate people about climate change has come to parallel the one to educate people about the dangers of tobacco. Tobacco campaigns started with a scientific argument (Doctors say: smoking is bad for you) before broadening into more advertising-inspired messages. When New York’s attorney general decided to investigate whether Exxon lied to the public or its investors about the risks of climate change, it recalled the decades of lawsuits brought against the four largest tobacco companies by the attorneys general of 46 states. When those cases were settled in 1996, tobacco companies had to pay the states money that went directly into funding anti-smoking advertising campaigns — particularly ones designed to stop teenagers from smoking in the first place.

Suing energy companies is going to be even harder than suing tobacco companies. That doesn’t make it any less entertaining to imagine what would happen if state attorneys general sued and won. There would be cheesy public service billboards in high schools about how uncool driving is compared to taking the bus. There would be television ads like this:

Right now, ads for energy companies are just part of the background noise of advertising that we all live with. They’re so familiar that we almost don’t see them anymore. But a few decades down the road, an advertisement glorifying wanton gasoline use could look as retro as these ads do today: 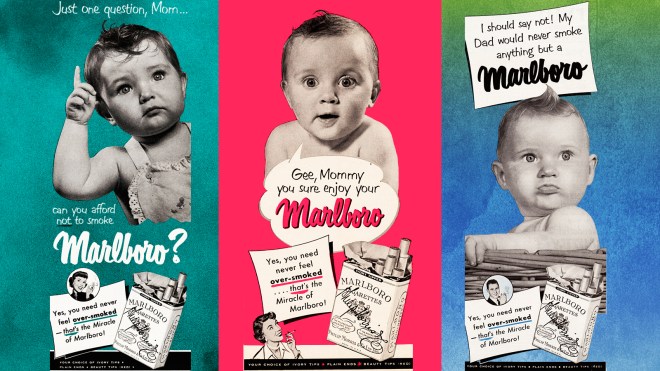 America used to be the world leader of warning labels. In 1966, it became the first country to force cigarette companies to print a warning from the surgeon general on every pack of smokes. They ran the gamut from “WARNING: Cigarettes are addictive,” to “WARNING: Tobacco smoke can harm your children.”

In 1966, 43 percent of Americans smoked. Fifty years later, that percentage has fallen to 18. Labels can’t claim all the credit, but the research is clear — warning labels work. Research also shows that warning labels are especially effective when they’re very large and combine pictures along with words, especially if those pictures are disgusting. That explains why it’s hard to buy a cigarette in many other countries without seeing a revolting picture of advanced mouth cancer. Beginning in 2012, cigarette packs sold in the United States were supposed to carry those picture warnings, too, but their rollout was blocked by a lawsuit from several cigarette companies.

The threat of lawsuits is part of the reason why gasoline warning labels have been slow to catch on. Countries that mandate large and graphic cigarette labels have been sued not only for violating intellectual property laws but also for violating international trade agreements. Both Berkeley and San Francisco have openly considered gasoline warning labels, only to find out they would be sued by the Western States Petroleum Association (WSPA). Berkeley’s proposal inspired a stern editorial in the San Francisco Chronicle by WSPA President Catherine Reheis-Boyd.

“It is, of course, ironic,” Reheis-Boyd wrote, “that the city of Berkeley — birthplace of the Free Speech Movement 50 years ago — would even consider an ordinance that so clearly treads upon the free speech rights of the men and women who own and operate service stations within its borders.”

The last time I was pumping gas, I looked up and saw that some enterprising person had clipped these ads to the fuel hoses: 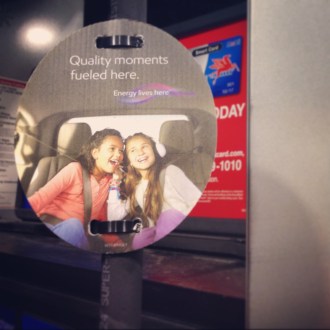 It made me think of something I had learned a long time ago. People don’t actually like pumping gas. Gas companies know this and have designed their pumps to look like ATM machines on the grounds that people like getting money from ATM machines more than they like paying for gas. People don’t like schlepping kids everywhere in cars either, any more than the kids like to be schlepped. In my experience as an actual child who spent long hours in the backseat of a Ford Taurus, a realistic photo would involve a lot more sulking.

So, in the same way that beer distributors drop off sexy bikini lady posters to make sure that everyone at the bar remembers how much fun beer is, energy companies feel compelled to push the joys of gasoline at gas pumps and on billboards around the world. It’s clear why they would push back against a warning label with everything they’ve got. The cognitive dissonance of a picture of happy kids hanging from the fuel line and a picture of a kid with an inhaler glued to the gas pump would be a bit much — in the same way that a baby congratulating mom and dad for their taste in cigarettes is impossible once you have a label right there on the cigarette pack telling you that smoke destroys their tiny lungs.

There is a precedent in the U.S. for using art to discourage people from using quite so much gas. During World War II, the government rationed gasoline, set the country’s speed limit at 35 mph, and banned automobile racing. Special courts were set up to deal with people who drove “for pleasure.” If they were found guilty, their gasoline rations taken away. The Office of Price Administration, which was in charge of gas rationing, embarked on an advertising campaign to make conservation seem patriotic. 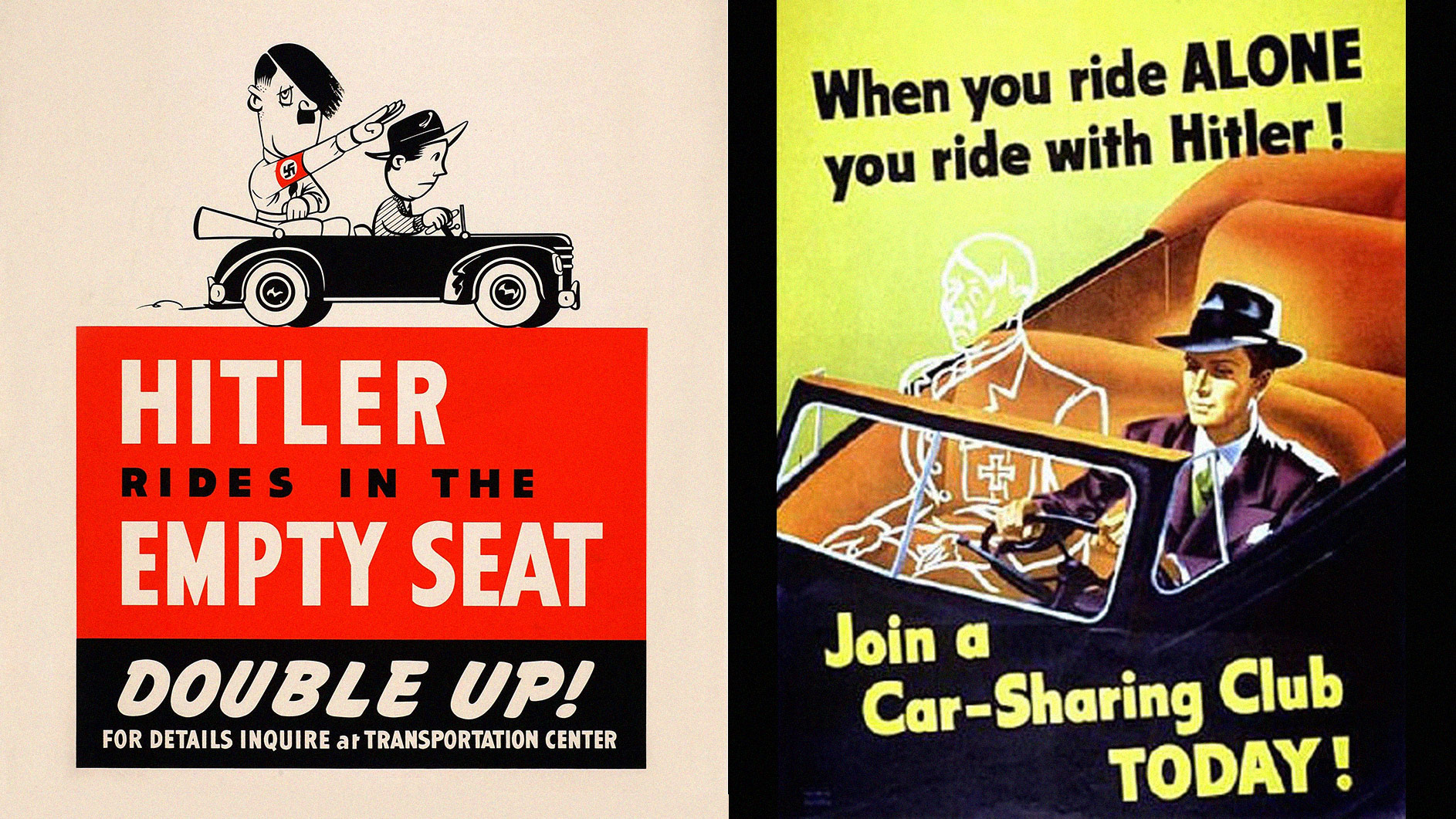 Out of all the conservation propaganda released during this period, “When you ride alone, you ride with Hitler” has had the most staying power. It’s been reworked so often that it’s acquired meme status.

To someone who has spent an awful lot of time looking at warning labels, the surprising thing is just how joyful old-fashioned conservation posters can be. 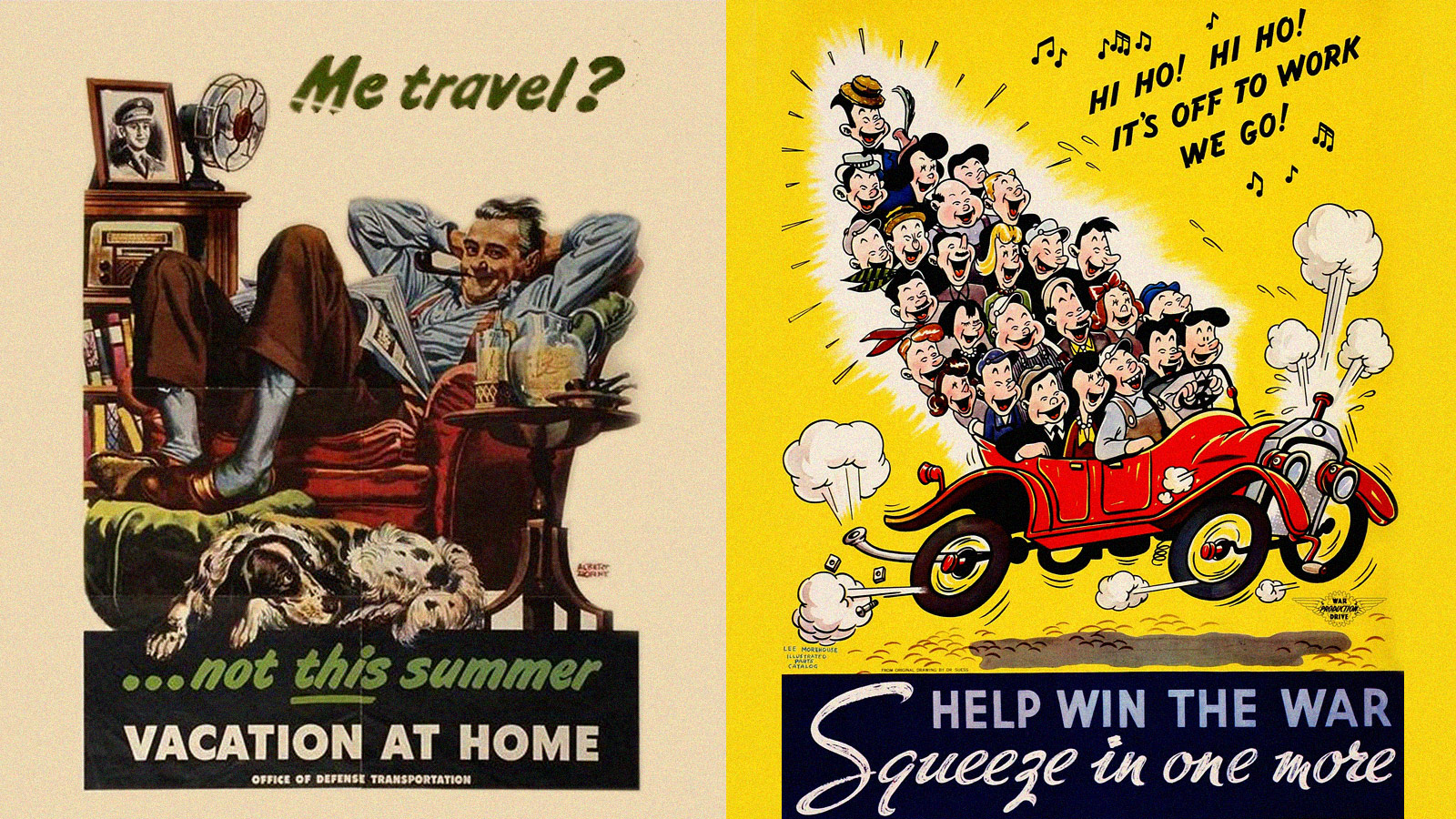 When you scare people, you get their attention. But that’s not the only way. A meta-analysis of research into fear and behavior change found that, even more than feeling scared, what motivated people to change was the feeling that they could do something, that their actions had some power in the world.

Putting labels on gasoline pumps isn’t going to fix climate change by itself, any more than cigarette labels fixed smoking. Another study found that simply raising the cost of cigarettes had a major effect, as did changing social norms that restricted people’s ability to light up in bars, restaurants, and other places that used to be clouded with smoke.

In other words, attempts to change behavior should also be accompanied by alternatives that make that change seem appealing and tangible. Can’t stop driving because most of this country’s infrastructure makes driving a necessity? Carpool, drive efficiently, and make sure to show up and vote for that light rail or Bus Rapid Transit project. When gasoline labels arrive — and they will — it’s important that they offer hope along with a dose of fear.