When a Whole Foods or Trader Joe's moves in, there goes the neighborhood 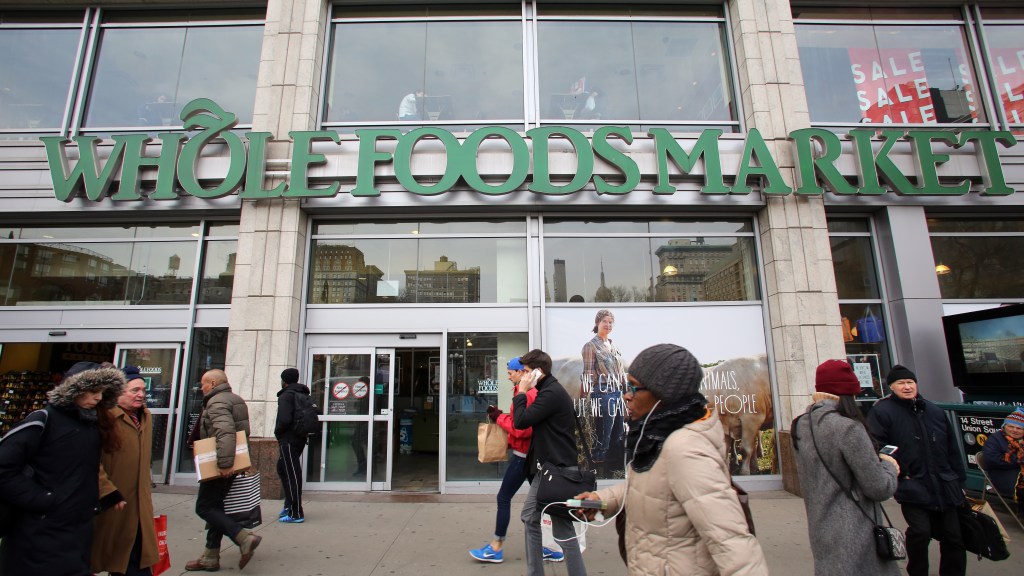 When a Whole Foods or Trader Joe’s moves in, there goes the neighborhood

There are four grocery stores within five blocks of my apartment. This once seemed like a selling point. It’s the opposite of a food desert — a food oasis, if you will, with national and regional grocery chains, a co-op, and a Trader Joe’s nearly in spitting distance of my front door. But it’s also one of the most expensive zip codes in Seattle — so expensive that the rent on my 300-square-foot shitbox of a studio is more than the mortgage on a sprawling suburban McMansion in most states. I’ve always assumed there was a correlation between the abundance of grocery stores — all of which have pleasant lighting, organic produce, and local kombucha in the cooler — in my neighborhood and the high cost of rent. Now there’s research to back me up.

According to a new study from the real-estate site Zillow, homes tend to appreciate in value when there is a local Trader Joe’s or Whole Foods nearby. This finding comes from a wide-ranging examination of city-level data on nearly 3 million homes (single-family, condos, and co-ops spanning more than 80 locations nationwide) within a mile of a Trader Joe’s or Whole Foods. From 1997 to 2014, the value of these homes exceeded that of the median home in the U.S., according to Zillow’s calculations. And by the end of 2014, these homes were worth more than double the year’s median home value.

The idea that high-end grocery stores increase housing prices isn’t new. Back in 2007, the consulting firm Johnson Economics (formerly Johnson Reid) used hedonic modeling to estimate how urban amenities influence residential home values. Their study found that the presence of a specialty grocer nearby actually increased these values by around 17.5 percent. Although the data tended to vary widely between neighborhoods, the overall effect was more pronounced than that of book shops, fitness centers, bike stores, or even spas. In addition, after speaking to numerous developers across the Pacific Northwest, the study concluded that Trader Joe’s and Whole Foods were among the most mentioned and marketable tenants.

Call it the “Whole Foods effect.” In 2013, developer Benjamin Miller wrote that when Whole Foods is considering new locations, they look for neighborhoods where real estate is still affordable but where they see a potential to rise in value. And unlike most retailers, Whole Foods doesn’t focus on area household income but on area education levels. “One of their brokers once told me, ‘Look, I don’t care what the incomes are; show me there are enough people there with degrees,'” Miller wrote. “If you work at a nonprofit, a yoga studio, or in government, but still shop at Whole Foods, then you know that the Whole Foods customer is not defined by his or her salary.”

But salary does define who can afford to live in an area, and when Whole Foods (or Trader Joe’s) moves into a neighborhood and increases the perceived livability for people of means, that’s when the problems start: Whole Foods comes, wealthy people follow, and lower-income folks are quickly priced out. And all too often, those low-income folks are people of color.

Some neighborhoods are fighting back. In 2014, Trader Joe’s yanked plans for a store in a historically black neighborhood in Portland, Ore., after protests by the the Portland African American Leadership Forum. The organization objected to the $2.4 million subsidy the city offered the grocery giant on the proposed site, a long-vacant lot in Northeast Portland. Former state senator Avel Gordly said that the Trader Joe’s deal would have been the latest incident in a long history of city leaders using commerce to displace black communities, and what the neighborhood really needed was more affordable housing. “In the past we have settled for far less,” Gordly said. “This is a people’s movement for African Americans and other communities, for self-determination.” The protest worked. A month after Trader Joe’s pulled out, Portland Mayor Charlie Hales pledged $20 million for affordable housing projects in the neighborhood.

Today, Colorado-based discount store Natural Grocers plans to take over the lot, and community objections have largely disappeared. “It wasn’t about Trader Joe’s,” local pastor and community leader Rev. T. Allen Bethel told me in a phone interview. “It was about affordable housing and community needs not being addressed. At this point, I don’t think there is a great concern about Natural Grocers going in there because the housing situation has been addressed as a result of what happened with Trader Joe’s.”

As for my neighborhood, the prices just keep going up — and so do the grocery stores: A new Whole Foods is slated to open in 2018. By that point, I’ll probably be priced out.