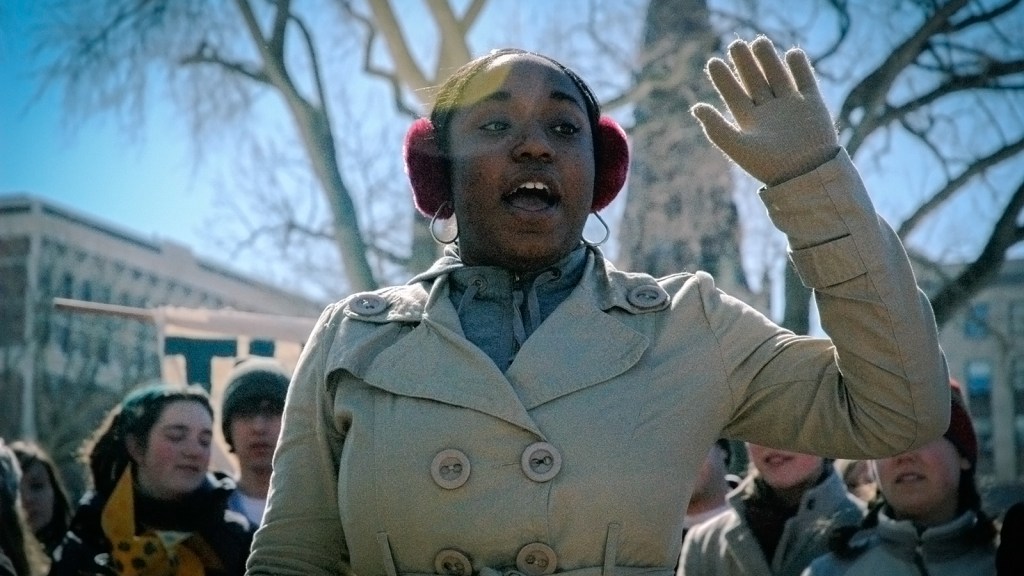 Rhonda Anderson and her daughter, Siwatu-Salama Ra, have spent much of their lives working to protect their Detroit community from polluters. Anderson has organized for the local Sierra Club for nearly two decades. And Ra represented the Motor City during the landmark Paris climate talks.

Ra, however, won’t be able to attend. Last month, a judge sentenced the 26-year-old mother, who is currently 7-months pregnant, to a mandatory two years in prison after she was controversially convicted of felony assault and firearm possession. She faces the prospect of giving birth in prison — away from her family, as well as the community she works to lift up.

“My daughter — my baby — she’s not doing well,” Anderson tells Grist. Ra, who had complications in her last pregnancy, is already experiencing contractions this time around. Her mother describes a pelvic examination her daughter recently had to endure while shackled.

“It’s medieval,” Anderson says. “And it reminds me of slavery.”

Black communities in the United States, like the one Ra and Anderson serve, face a host of structural challenges that impact day-to-day life — from environmental injustice to heightened policing and racial profiling. Black people are 75 percent more likely than other Americans to live in neighborhoods that border oil and natural gas refineries — and they face a disproportionate amount of health threats as a result of air pollution. As a black woman, Ra is more likely to be incarcerated than a white woman — four times more likely, in fact. These systemic injustices have collided in Ra’s case, as her supporters say a double standard and a flawed legal system have robbed her community of one of its most dedicated defenders.

“Siwatu has spent her life fighting environmental injustice and pushing back against the big polluters who are violating the law to poison her community,” the Sierra Club’s executive director, Michael Brune, said in a statement. “In this case, it does not appear that she is being afforded the protection of the law she deserves, as is all too often the case for women of color dealing with our criminal justice system.”

Here’s how Ra arrived at her current predicament: This past summer, at Anderson’s home, Ra got into an argument with another woman. As the dispute escalated, the woman reportedly rammed her vehicle into Ra’s car — which had Ra’s toddler inside — before allegedly aiming her car at Anderson. In response, Ra, who says she repeatedly asked the woman to leave, reportedly took out her unloaded, registered firearm. The woman called the police before Ra did, which authorities said made Ra the assailant in the case.

Michigan has a stand-your-ground law that protects people from facing criminal charges if they use deadly force in self-defense. It’s the same legal strategy George Zimmerman successfully employed in Florida after he shot and killed 17-year-old Trayvon Martin, who was walking to his father’s Orlando-area home. To prove her innocence under the provision, Ra needed to convince jurors that she was afraid for her life.

“The prosecutor convinced the jury and judge that I lacked fear, and that’s not true,” Ra said during her sentencing. “I was so afraid, especially for my toddler and mother. I don’t believe they could imagine a black woman being scared — only mad.”

Ra’s advocates have called into question the fact that the jury was not informed that finding Ra guilty would result in a mandatory sentence. Because of the required punishment for a guilty verdict, letters of support from the community attesting to her years of service had no effect in lessening her punishment.

“In environmental-justice organizing, you’re dealing with a lot of small emergencies all the time, especially in an underdeveloped, under-resourced city like Detroit,” says William Copeland who worked alongside Ra at the East Michigan Environmental Coalition. Her incarceration, he adds, “is a big emergency.”

Copeland says Ra excels at getting people who are often left behind engaged in environmental justice work. As a teen, she founded a program to get urban youth involved in the East Michigan Environmental Coalition — reeling in a group that other environmentalists hadn’t been able to reach.

“The successes that she had shows the depth of being able to speak people’s language — to be able to read something that’s written in one language and translate it to the language of the ‘hood or the language of the people,” Copeland says. “[Without Ra], those folks wouldn’t be getting involved.”

That’s one reason why he and Anderson say they need Ra back in the community immediately. In the past, she’s also worked to hold a Marathon Petroleum refinery and the Detroit Renewable Power trash incinerator accountable for their emissions. “Get her back out here so she can continue the work that she’s been doing all these years,” Anderson says.

Ra’s attorneys are working toward an appeal and asking that she be released on bond so that she can give birth outside of prison. On Wednesday, the Council on American-Islamic Relations Michigan Chapter filed a complaint on behalf of Ra and other Muslim women at the Women’s Huron Valley Correctional Facility, noting that they have not been allowed religious meal accommodations or access to a hijabs.

As part of her campaign to free her daughter, Anderson is calling for the larger environmental community to realize that pollution is just one of many inequities people in fence-line communities face. But polluting and criminalizing these groups essentially go hand-in-hand, she explains.

“As long as we find a whole group of people dispensable, the environment is going to continue to be impacted. You can pollute them and do whatever to them, and white folks and anybody else can sit off to the side and say, ‘I’m safe — it’s not me,” Anderson says. “We are the ones that are preyed upon.”