Why 10,000 farmers have gotten behind the Green New Deal 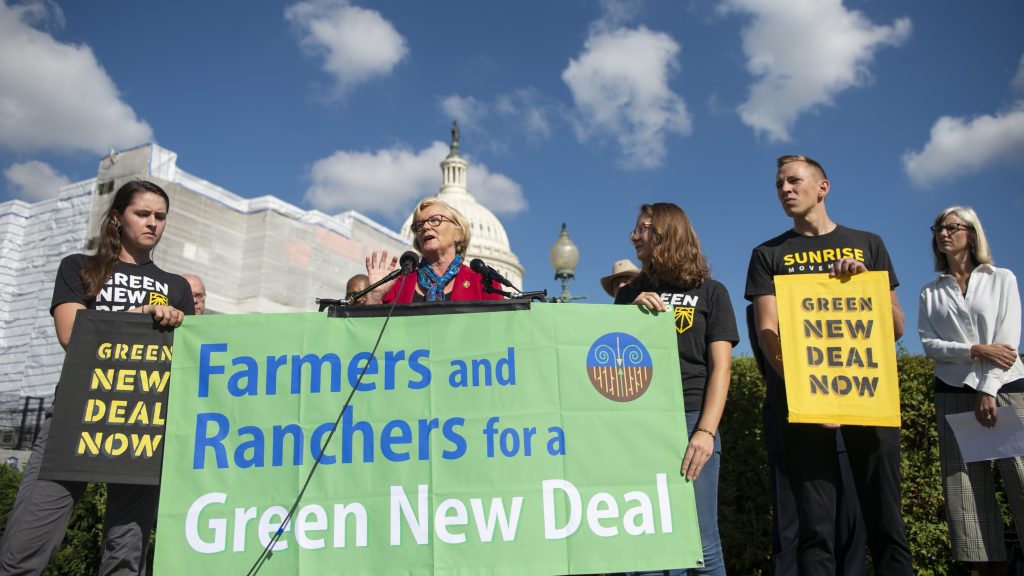 Why 10,000 farmers have gotten behind the Green New Deal

This story originally appeared in FERN’s Ag Insider. It is republished here as part of Grist’s partnership with Covering Climate Now, a global collaboration of more than 250 news outlets to strengthen coverage of the climate story.

A coalition that unites farmers and ranchers behind the Green New Deal hopes to set a new tone for how the agriculture sector relates to policy solutions to address the climate crisis, and ensure farmers have a voice in the debate.

Farmers and Ranchers for the Green New Deal (GND) officially launched on Wednesday with a press conference at the Capitol and a letter to Congress urging members to support the GND resolution.

Leaders of the coalition say it represents nearly 10,000 farmers and ranchers who want to be part of the conversation as Congress considers how and whether to move forward with the GND. Farmers from across the country spoke at the press conference, as did a member of Sunrise Movement, a youth-led climate action group, and several members of Congress.

A major theme of the press conference was the essential role of farmers in addressing the climate crisis. Agricultural and land use practices have been identified by the Intergovernmental Panel on Climate Change as major contributors to climate change. And climate-friendly strategies like sequestering carbon in the soil and expanding the use of regenerative farming practices require buy-in from farming communities.

“We’re not going to solve the climate crisis without addressing agriculture,” said Representative Earl Blumenauer of Oregon, an original cosponsor of the Green New Deal resolution and a longtime advocate for local and sustainable food.

“The debate about whether or not to act on the climate crisis should have ended a long time ago,” said Representative Jim McGovern of Massachusetts. “Our farmers are the ones who live every day with the impacts of the crisis. … Our farmers should be the ones who get to have a say in our future, not the people who want to maintain the disastrous status quo.”

The Green New Deal resolution calls for a 10-year mobilization to transition away from reliance on fossil fuels and boost the economy by creating jobs in clean energy and other climate-friendly sectors. The resolution was introduced in the House in February by New York City Representative Alexandria Ocasio-Cortez, and now has 95 cosponsors.

At first, the GND didn’t win farmers over. A rocky rollout led to the perception that the resolution cast farmers as part of the climate change problem rather than potential allies in finding solutions. In March, the National Farmers Union voted not to endorse the GND because “the resolution appeals to an urban voter base and does not recognize the essential contribution of rural America.”

The leaders of the Farmers and Ranchers coalition said they’ve had to overcome some farmers’ reservations about the GND but that many are beginning to change their minds.

Will Harris, a rancher from Bluffton, Georgia, who runs White Oak Pastures, a regenerative and grass-fed livestock farm, and is cochair of the Farmers and Ranchers coalition, said that as a middle-of-the-road voter he isn’t the typical supporter of aggressive climate policies. But he and others like him see the importance of farmers’ role as environmental stewards.

“I’m not a policy wonk,” he said in an interview. “I hope that my contribution would be that … very moderate people [take an] interest in this.”

The Farmers and Ranchers coalition supports policies that encourage carbon sequestration, enhance access to local food, build local food systems, and provide safe conditions for farmworkers. Some of its specific goals include fair prices for farm products, breaking up agribusiness monopolies, supporting beginning and diverse farmers and ranchers, and strengthening support for farmers transitioning to organic and regenerative practices.

A wide range of farmers and farming organizations contributed to drafting the coalition’s policy goals. Leah Penniman, codirector and program manager at Soul Fire Farm in Grafton, New York, said in an email that participating in drafting the platform “represented an important moment in terms of integrating social and environmental priorities into a cohesive vision for the future of farming.”

Penniman notes that any Green New Deal incentives and programs must “reach those who have been historically excluded from government programs, like Black farmers and indigenous people.” The coalition’s goals include several specific steps toward enhancing support for Native American, black, and other marginalized farmers and farmworkers, including reparation for dispossessed land, a pathway to citizenship for farmworkers, and an expansion of outreach programs by the Department of Agriculture.

Getting farmers and ranchers behind the Green New Deal could be essential to achieving the resolution’s major proposals, such as reaching net zero carbon emissions in the United States by 2030. Ronnie Cummins, international director of Regeneration International, which co-organized the Farmers and Ranchers coalition alongside Sunrise Movement, says that goal simply isn’t possible without farmers.

“You can’t possibly reach the goal of net zero emissions by 2030 from just reducing fossil fuel use,” he said. Yet the country could cut “fossil fuel use by 50 to 60 percent and then [sequester] the remainder” by enlisting farmers, he said.

Supporters of the GND, including farmers and ranchers, still have an uphill battle to turn the framework into policies and to get those policies passed. But at the press conference, its supporters expressed determination to keep the conversation going.

“Family farms like mine have lost so many things that we can’t get back,” said Garrett Blad from Sunrise Movement, who grew up on a farm in Indiana. He spoke of the “stranglehold” agribusiness has on farmers and the already encroaching damage of climate change. But, he said, “there is still something worth fighting for.”

When asked about the dismissal of the Green New Deal by trade associations and other agribusiness interests, Sherri Dugger, an Indiana farmer, executive director of the Indiana Farmers Union and Women, Food, and Agriculture Network, and cochair of the coalition, said she doesn’t care about the “mockery” from powerful agriculture groups. “This is an important conversation that we have to have at a policy level, at an organizational level, at a societal level, and at an individual level,” she said. “This is serious stuff.”