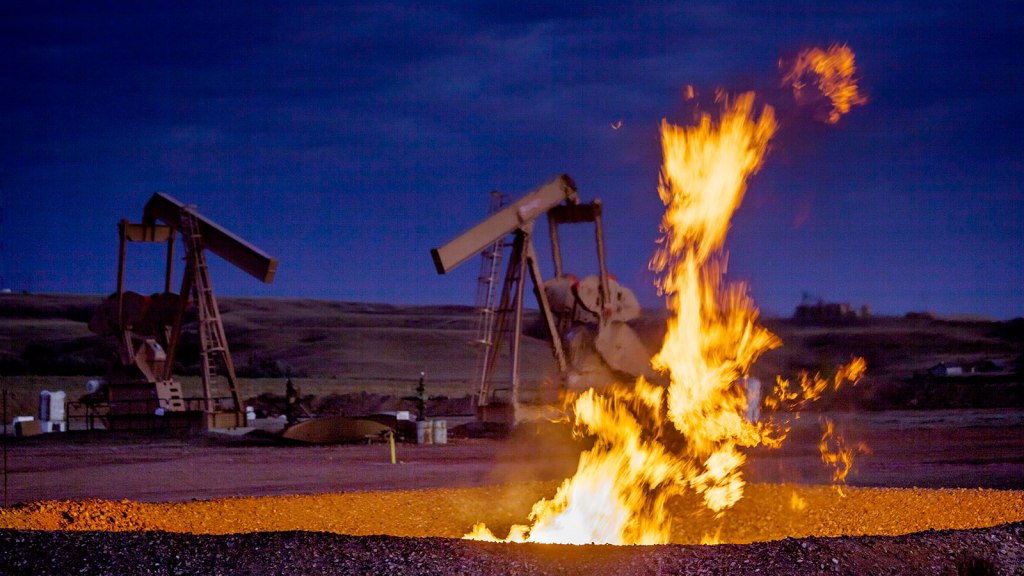 Orjan F. Ellingvag / Corbis via Getty Images
none of your business

The Environmental Protection Agency announced plans late last week to eliminate an Obama-era rule that required oil and gas companies to monitor and control the release of the potent greenhouse gas methane during their operations.

The proposed standards would no longer require new natural gas wells, pipelines, and storage facilities to detect and limit leaking methane, the primary component of natural gas which packs at least 25 times the atmosphere-warming power of carbon dioxide.

A number of parties have spoken out against the regulatory change, including Democratic politicians, public health experts, environmental activists, and of course, scientists. But perhaps the most surprising opponents are those it ostensibly benefits: major oil and gas companies like BP, ExxonMobil, and Shell. It seems counterintuitive for big businesses to oppose regulatory cuts, especially since Trump has touted his rollbacks as business-friendly. Why would large oil companies would actually want to be regulated?

There are two main reasons. The first has to do with public relations. Many fossil fuel companies are trying to revamp their image as the public learns about how much and how early the fossil fuel industry knew about climate change (spoiler: a lot, and the 1970s, respectively). Part of their PR push is positioning themselves as part of the solution, by pushing natural gas as a “cleaner” fossil fuel that can be used alongside alternatives like wind and solar.

Gretchen Watkins, president of Shell’s U.S. division, which has fracking and refining operations in more than 70 countries, has said that methane leaks are “a big part of the climate problem, and frankly we can do more.” A study last year estimated that 13 million metric tons of natural gas is lost through leaks each year, about 2 percent of all natural gas produced in the U.S. On Thursday, Watkins announced Shell’s plans to reduce methane leaks from its own global operations to less than 0.2 percent by 2025. And Shell isn’t the only fossil fuel company going full-steam ahead with the “we’re part of the solution” message. More than 60 companies have already pledged to curb methane emissions independent of government regulations.

The second reason the biggest oil and gas firms oppose the rollback has to do with competition among oil and gas companies. Multinational companies like BP and Shell could easily afford to comply with the Obama-era methane rule. (The EPA has said the regulatory rollback will save the oil and natural gas industry $17 million to $19 million per year, a drop in the oil barrel for a $388 billion company like Shell.) The regulation basically just forced big companies to capture natural gas more efficiently, which is good for their bottom lines. But softening the methane rule will actually help smaller oil and gas companies, which have smaller profit margins and can’t as easily comply with regulations. So, from the perspective of fossil fuel behemoths, cutting the methane rule gives a leg up to the little guys.

This isn’t the first time President Trump’s “pro-business” plans have met a tepid response from the industry he was trying to boost. Some electric utility companies have opposed weakening Obama-era limits on toxic mercury pollution — many have already spent billions to comply with the Obama-era rule, so eliminating it does little to help them now. And automakers have continued to balk at the administration’s plans to roll back fuel efficiency standards. With California maintaining higher standards, automakers are caught in the middle and are increasingly siding with the Golden State (as is the U.S. Chamber of Commerce), for the simple reason that they don’t want to produce different cars for different states. Just last week, the President furiously tweeted that Henry Ford was “‘rolling over’ at the weakness of current car company executives.”

Though the auto industry is protesting the regulation changes for different reasons from the oil industry, both are related to the fact that the Trump administration is woefully behind the times. The established regulations, along with consumers who are increasingly concerned about the climate, have set the market on a different path. New technologies are being implemented, and time and money have been invested in products that will meet new green demand. As a result, many fossil fuel, car, and energy companies would rather stick to the old plan than accept a regulatory gift from the Trump administration that’s more trouble than it’s worth.