Why water is so sacred to Native Americans 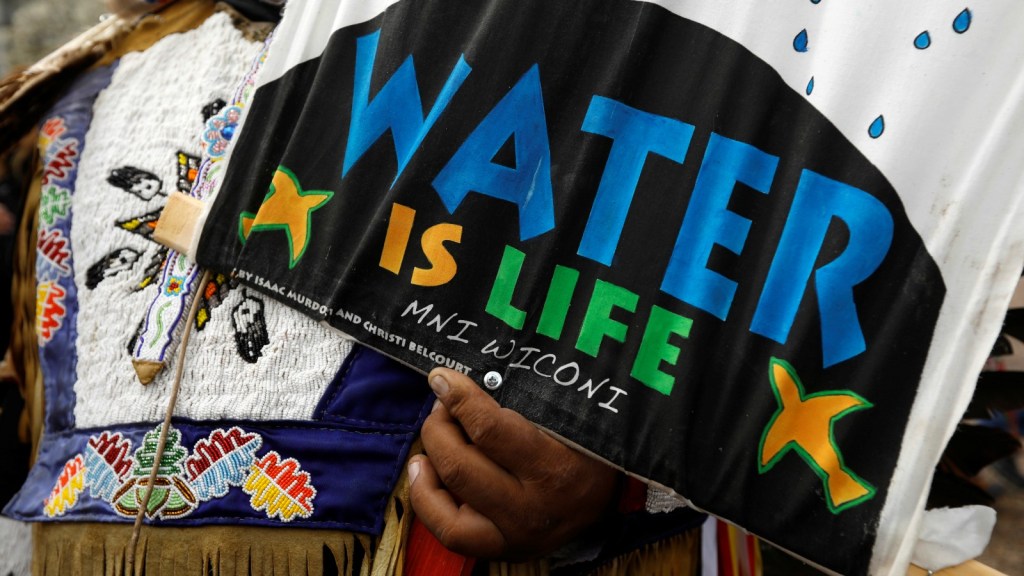 Why water is so sacred to Native Americans

The Lakota phrase “Mní wičhóni,” or “Water is life,” has become a new national protest anthem.

It was chanted by 5,000 marchers at the Native Nations March in Washington, D.C., on March 10, and during hundreds of protests across the United States in the last year. “Mní wičhóni” became the anthem of the almost year-long struggle to stop the building of the Dakota Access Pipeline under the Missouri River in North Dakota.

This chant mirrors the civil rights anthems of the past, which emerged out of the African-American church. “Mní wičhóni” in the Lakota language also has spiritual meaning, which is rooted in a connection to nature. As a Native American scholar of environment and religion, I understand what makes the relationship between Native people and the natural world unique.

For Native Americans, water does not only sustain life — it is sacred.

Water and the American West

The Great Plains of North America, home to the Lakota, the Blackfeet, and other tribes, is a dry, arid place. The U.S. government spends billions of dollars to control and retain water in this “Great American desert,” as it was described in the early 19th century.

Geologist John Wesley Powell, an early director of the U.S. Geological Survey, pointed out in an important 1878 government study that the defining characteristic of the Great Plains and the West was its lack of water. He attempted to promote land ownership that was based on watersheds, instead of dividing land into the rectangular lots still in use today.

Powell also recommended that America adopt a new type of land development — one that worked with nature, so everyone had access to water.

The U.S. government, however, ignored Powell’s ideas. Writing on this issue later, author Wallace Stegner, who was passionate about the West, commented:

“[W]hat do you do about aridity … You may deny it for a while. Then you must either adapt to it or try to engineer it out of existence.”

The Lakota, the Blackfeet, and the other tribes understood how to live with nature. They knew it was best to live within the restrictions of the limited water supply of the Great Plains.

For thousands of years, Native American tribes across the Great Plains developed their own methods of living with the natural world and its limited water supply. They learned both through observation and experiment, arguably a process quite similar to what we might call science today. They also learned from their religious ideas, passed on from generation to generation in the form of stories.

The water world, in particular, was held in special regard. The Blackfeet believed that in addition to the divine beings, about which they learned from their stories, there were divine animals, such as the beaver. The divine beaver, who could talk to humans, taught the Blackfeet their most important religious ceremony. The Blackfeet needed this ceremony to reaffirm their relationships with the three separate realms of reality.

The Soyiitapi, divine water beings, also instructed the Blackfeet to protect their home, the water world. The Blackfeet could not kill or eat anything living in water; they also could not disturb or pollute water.

The Blackfeet viewed water as a distinct place — a sacred place. It was the home of divine beings and divine animals who taught the Blackfeet religious rituals and moral restrictions on human behavior. It can, in fact, be compared to Mount Sinai of the Old Testament, which was viewed as “holy ground” and where God gave Moses the Ten Commandments.

Native American tribes on the Great Plains knew something else about the relationship between themselves, the beaver, and water. They learned through observation that beavers helped create an ecological oasis within a dry and arid landscape.

As Canadian anthropologist R. Grace Morgan hypothesized in her dissertation “Beaver Ecology/Beaver Mythology,” the Blackfeet sanctified the beaver because they understood the natural science and ecology of beaver behavior.

Morgan believed that the Blackfeet did not harm the beaver because beavers built dams on creeks and rivers. Such dams could produce enough of a diversion to create a pond of fresh clean water that allowed an oasis of plant life to grow and wildlife to flourish.

Beaver ponds were a win-win for all concerned in “the Great American desert” that modern ecologists and conservationists are beginning to study only now.

For the Blackfeet, Lakota, and other tribes of the Great Plains, water was “life.” They understood what it meant to live in a dry arid place, which they expressed through their religion and within their ecological knowledge.

Indigenous people from around the world share these beliefs about the sacredness of water.

The government of New Zealand recently recognized the ancestral connection of the Maori people to their water. On March 15, the government passed the “Te Awa Tupua (Whanganui River Claims Settlement) Bill,” which provides “personhood” status to the Whanganui River, one of the largest rivers on the North Island of New Zealand. This river has come to be recognized as having “all the rights, powers, duties, and liabilities of a legal person” — something the Maori believed all along.

Many other countries have come to view the natural world and water from a similar perspective. In Bolivia, for example, the government passed laws in 2010 and 2012 for the “Law of the Rights of Mother Earth,” which were motivated by the belief that nature has legal rights. The Ecuadorian constitution in 2008 recognized the rights of “Nature, or Pacha Mama,” with “respect for its existence,” which included water.

The United States does not have such laws. This is why the Standing Rock Lakota have been demanding for almost a year a right to clean water — free from the threat of potential environmental harm and to protect its sacredness.