Will Congress leave the Colorado River high and dry? 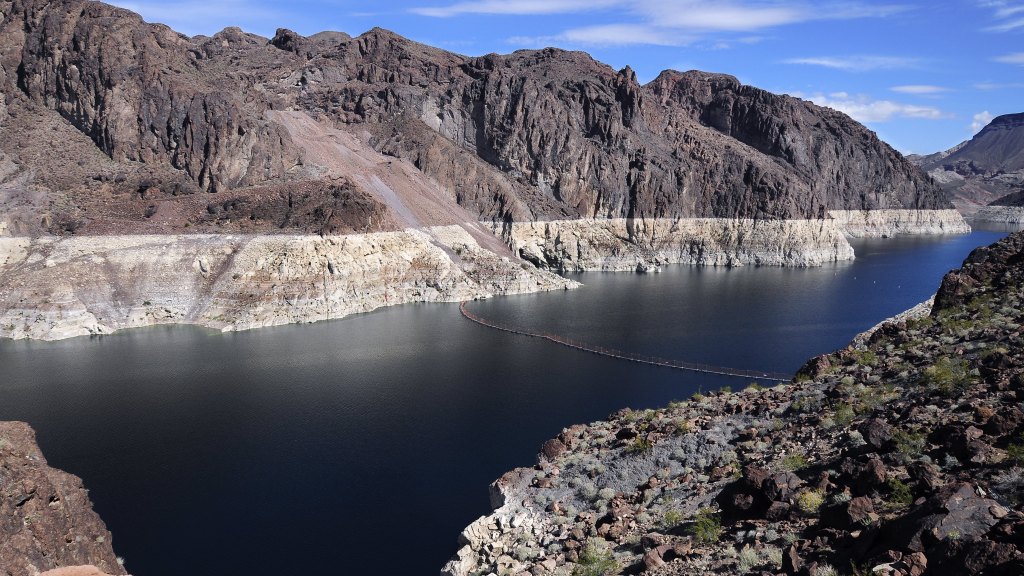 Will Congress leave the Colorado River high and dry?

Imagine this grim scenario: The drought that has plagued the Colorado River over the past two decades continues into 2021. The water level in Lake Mead drops precipitously, hitting the 1,075 feet mark — a critical threshold that triggers mandatory water restrictions — and then plunges further. The seven Western states that rely on the beleaguered river are forced to reduce the amount of water they draw, threatening water supplies for Phoenix, Las Vegas and other cities and forcing farmers to let thousands of acres lie fallow. Hydropower production at Hoover and Glen Canyon dams becomes impossible.

That may sound far-fetched, but it’s the picture representatives of the seven Colorado River basin states recently painted of what lies ahead if Congress didn’t authorize a drought plan the states put together for the river soon.

“The urgency is real because our system is stressed by warmer temperatures,” Colorado’s lead water official, James Eklund, told the House Natural Resources Committee last week. “When water resources are stressed in any river basin, our environments and people in poverty bear a disproportionate amount of the pain,” he said. “We really need you to, in order for us to control our own destiny, act now.”

It’s no exaggeration to say that the Colorado River is the lifeblood of the American West, a source of water for 40 million people and 5.5 million acres of farmland. But the river has been under enormous stress. Among the many problems: a long-running drought, ballooning demand for water as cities in the West grow, poor policies that incentivize water waste, bad underlying data that led water managers to believe the river held more water than it did, and, of course, warming temperatures.

After months of negotiations, the seven Colorado River basin states settled on a drought plan they can live with last month. Now, they’re asking Congress authorize the federal government to implement the plan. Senator Martha McSally and Congressman Raúl Grijalva, both from Arizona, introduced legislation on Tuesday to do just that.

Here’s a look at what’s at stake as well as other potential land mines that lie ahead.

To understand why the Colorado River is in the sorry state that it is today, you have to go back to 1922 when a compact was signed by the seven states — Arizona, California, Nevada, New Mexico, Colorado, Utah and Wyoming — that share the Colorado River’s water. At the time, the states believed that roughly 18 million acre-feet flowed through the Colorado. (One acre-feet is the amount of water needed to flood a one-acre field with a foot of water. It’s about 325,000 gallons.)

But that was based on surveys collected during an extremely wet period in the river’s history. More recent studies show that its river’s annual flow is about 15 million acre-feet. Since the states divvied up the water based on information gathered in an exceptionally wet year, states have rights to more water than is available in the river. It’s like promising 18 slices of pie when you only have 15.

This “structural deficit,” as it’s called, is a major underlying issue in managing the river. Add it to the fact that cities in the West have grown dramatically in the last few decades and that farmers dependent on the Colorado are growing thirsty crops like cotton and alfalfa in the desert, and you can see why there’s just not enough water to keep everybody happy.

What about climate change?

It’s making the situation worse. More than half of the decrease in water in the river is a result of warming temperatures, according to recent research. The snowpack in the Rockies that feeds the river has been dwindling, and rising temperatures mean more water evaporates from the river. The Bureau of Reclamation, the federal agency that manages water in the West, projects that as the planet continues to warm and demand for water increases, the imbalance between the water available and human need will grow to 3.2 million acre-feet by 2060. That’s more than all the water allocated to Arizona from the river at the moment.

So how does the drought plan help?

Lake Mead is a critical reservoir on the Colorado River that has the capacity to store the entire flow of the river for two years. If levels at Lake Mead sink to 1,075 feet, it will automatically trigger cuts to water use. Water managers have called this mandatory restriction “draconian” because it follows a set of laws that primarily cut off water users with newer water rights. There’ll be little room for compromise or trade offs. Lake Mead currently sits at 1,090 feet, and the Bureau of Reclamation has estimated that there is more than a 50 percent chance there will be a shortage in the lake in 2020.

The states are now trying to avoid that situation by voluntarily agreeing to use less water. California, Arizona and Nevada have agreed to decrease the amount they pull from the river by 400,000 to 600,000 acre-feet every year depending on how low water levels get at Lake Mead. An international treaty between the U.S. and Mexico also requires the U.S. to deliver 1.5 million acre-feet of water to Mexico. A separate agreement has been reached with Mexico to conserve water.

All this talk of compromise is at odds with the oft-repeated maxim in the water world that whiskey is for drinking and water is for fighting over. Researchers expect that as climate change strains water availability, conflict over shared water resources will increase.

But at the Congressional hearings last week, lawmakers and state water managers emphasized collaboration. “There was a point in time when the Colorado River was the most litigated river in the world,” said John Entsminger, general manager of the Southern Nevada Water Authority. “Since the 1990s, we’ve been a model on how you can come together as a region.”

That’s all fine and dandy. What could go wrong though?

Well, there’s one key player that’s not on board with the current plan. Imperial Irrigation District is a powerful interest in California politics. It’s one of the biggest irrigation districts in the country and the river’s largest single user. In January, the district upset the states’ drought plan when it demanded $400 million in state and federal funds for rehabilitation work in the Salton Sea — California’s biggest lake — in exchange for its commitment to cut water use. The Salton Sea has shrunk dramatically in recent years exposing a contaminated lake bed and threatening nearby communities with toxic dust.

Though the district had the support of powerful politicians, including Senator Dianne Feinstein, other water users in the state balked at the demand. In February, the Metropolitan Water District of Southern California, which supplies water to Los Angeles, stepped up and agreed to contribute IID’s share. That left IID with no role to play in the drought plan.

IID has issued strongly-worded statements claiming the Salton Sea issue is the “proving ground” for the drought plan and that by sidestepping the issue, water users on the Colorado are “just fooling themselves or have other agendas.” Representatives for the irrigation district were reportedly on Capitol Hill lobbying lawmakers last week.

The seven Colorado River states have set a deadline of April 22 for Congress to pass legislation signing off on their drought plan. What happens if they don’t? Mexico wouldn’t have to cut its water use in 2020 as promised.

In a press release, Patrick Tyrrell, Wyoming’s state engineer, said that the drought plan is an “indispensable bridge” until the states negotiate a longer-term solution. “With these plans, we have direction,” he said. “Without them, we face an uncertain future and increased risks.”