For nearly two decades, Charles C. Mann has been troubled by a realization that struck him just after his daughter was born. He was walking outside the hospital on a freezing New England night when the thought stopped him mid stride: By the time she reached his age, there would be 10 billion people living on the planet. How the hell would that work?

Mann makes his living as a science writer and is best known for his bestselling histories of America around 1492. Ever since the night of his daughter’s birth, Mann has asked the scientists he interviewed if he could buy them a cup of coffee afterward in order to ask them his nagging question: What are we going to do as population rises?

The responses he got fell into two broad categories depending on the person. The ones who thought technology would save us he dubbed “wizards.” Those who thought we were screwed unless we controlled population growth he called “prophets.”

After years of these interviews, woolgathering, and worldwide travel, Mann turned it all into his latest book, The Wizard and the Prophet: Two Groundbreaking Scientists and Their Conflicting Visions of the Future of Our Planet. We recently talked with Mann about the types of solutions preferred by wizards and prophets, and why he thinks this division means that no one ever changes their mind about nuclear power, renewable energy, or genetically modified food. 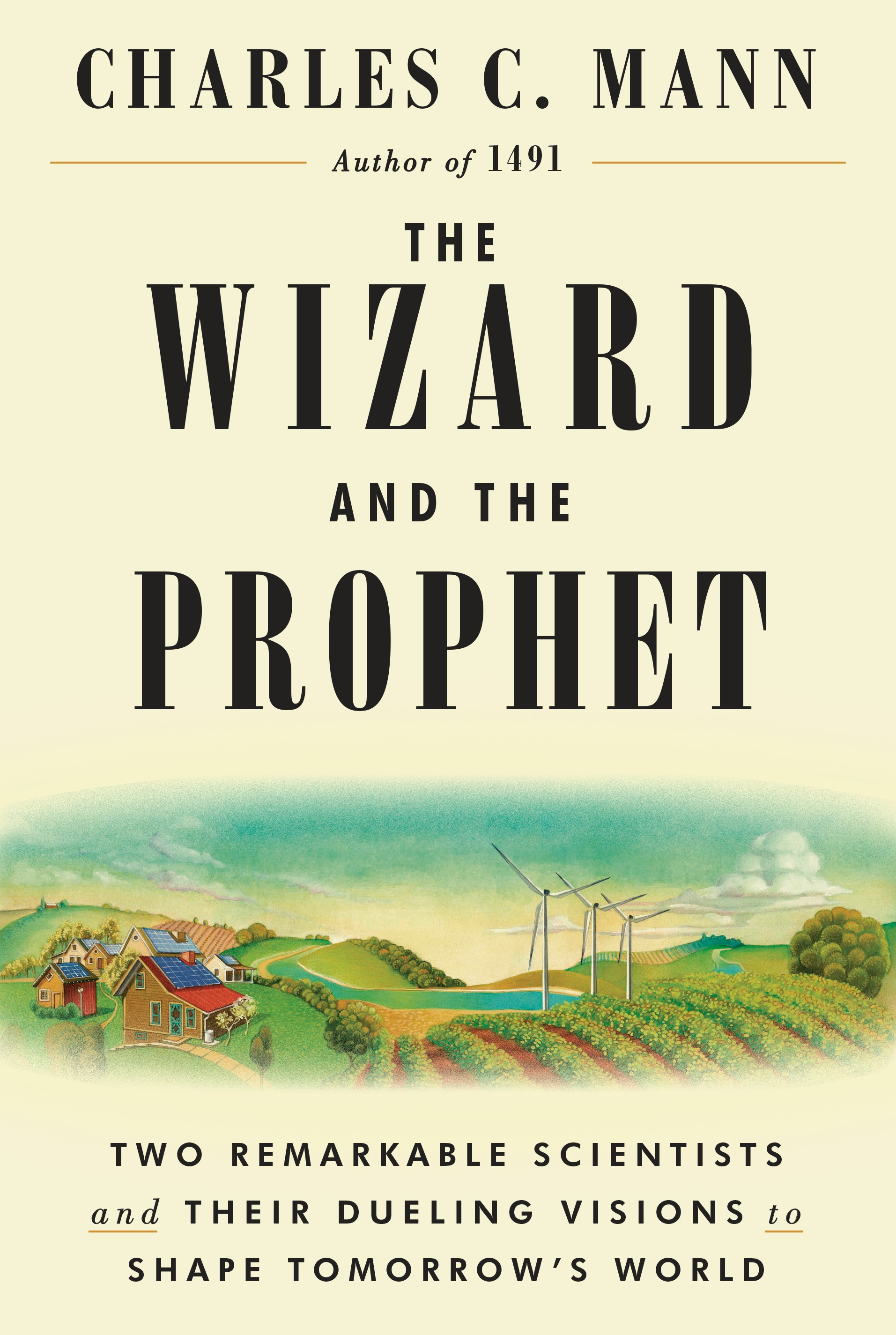 Q. You coined the terms “wizards and prophets” to describe two types of people. Can you define these labels?

A. Well, I coined them as a sort of shorthand. A philosopher friend of mine said that there was a very clear way to describe these groups, one of them is a Schumpeterian–technophiliac–meliorist (laughs). But that didn’t seem all that clear to me, so I call them wizards, as in techno-wizards. Wizards basically believe that science and technology, properly applied, can let us produce our way out of our dilemmas. Prophets believe that there are natural limits, and we transgress these limits at our peril.

Their recommendations are kind of the opposite of each other. One is saying, “Be smart, make more, and that way everyone can win.” The other is saying, “Hunker down, conserve, obey the rules, otherwise everyone is going to lose.”

A. Right. And both of them have really strong arguments.

Q. The wizard you chose to focus on was the agronomist Norman Borlaug. Why him?

A. I kept hearing his name from wizards, people who said we’re going to have to use science and technology, we’re going to have to be like Norman Borlaug. He’s the main figure behind what’s been called the Green Revolution — the combination of hybrid seeds, high intensity fertilizer, and irrigation that boosted grain yields in the ’70s and ’80s.

Q. Your prophet is the ecologist William Vogt, and you make a good case that he really cued up the modern environmental movement.

A. Vogt popularized the idea of “carrying capacity.” That is a term you get hit with if you ever take Ecology 101: It’s the idea that environments can only produce so much and if you go over that limit bad things happen. He took it from an arcane scientific idea — used to figure out how many deer can survive in a meadow — and stretched it to cover the entire world. Nowadays we use terms like planetary boundaries or ecological limits, but it’s basically the same thing. I think that’s the foundational idea of the environmental movement: An awareness of limits and a fear that we are exceeding them.

Q. I’d like to throw out three different problems and have you generalize about how wizards and prophets might solve them. Let’s start with energy. How do we keep the lights on?

A. For wizards the answer is basically to stick with the same system we have now but with cleaner energy. Ideally with nuclear power because it has the smallest footprint of any low-carbon source, but you could also have giant concentrated solar plants and that sort of thing.

The prophets dislike nuclear on prudential grounds. You know, it’s too expensive, there’s a waste problem, there’s a risk of accidental meltdown. On a deeper level, they just don’t like the idea of giant corporate structures controlling something as powerful as energy. They are deeply attracted to this idea of self-reliant, smaller scale, more democratic communities in control of their own energy. I have to say this is something that’s really appealing to me. I’m talking to you from a small town with a house with a big solar array on the roof.

Q. OK, next problem: How do we feed ourselves?

A. Aha, there again, wizards basically don’t see anything wrong with industrial agriculture. Yes, there are some problems, but they can be fixed. For instance, farmers could apply fertilizer better and not send so much into lakes and oceans. Again, keep doing what we have been doing but make it cleaner. That almost always leads you right to GMOs — the idea is we might make crops much more productive and reduce our footprint.

It’s not crazy if you accept the way industrial agriculture is the way to go. I talk in the book about the C4 rice initiative at the International Rice Research Institute in the Philippines, which aims to make photosynthesis work better in rice. The reason rice crops need most of their fertilizer is to make this enzyme called rubisco that plays a key role in photosynthesis. So the idea is if you had more efficient photosynthesis you would have less rubisco, less nitrogen, less fertilizer, less pollution, and a bigger harvest, and everybody would be a winner. And that’s the wizard theme.

Q. And the prophets? How would they fix food?

A. They see industrial agriculture as the problem, so propping it up is, for them, like trying to put out a fire by pouring on gasoline. They see it causing environmental degradation, from the dead zones at river mouths to the destruction of soils. They would like to see a radically different form of agriculture, one that doesn’t depopulate the countryside, one that mimics natural ecosystems, and grows lots of types of crops. There are some limits on how much production you can squeeze out of grains, and trees and tubers can produce vastly more. So if you put all those elements together on farms you would be able to produce more, more sustainably. It would require more work so you would have more jobs and more vital rural communities, and lots of good things would come from that — at least this is how the prophets see it.

Q. OK, next up is geoengineering. How do we cool the planet down?

A. I think this is a really important subject and one that doesn’t get enough attention. So far I’ve been pretty factual but here I’d like to give you my opinion: Even though we’ve made great progress on carbon emissions, I think it may not be fast enough. So what do you do? That’s where geoengineering comes in. Wizards and prophets have different forms of it.

Wizards typically favor something like solar radiation management, which is essentially sprinkling tiny reflective spheres in the upper atmosphere to bounce back a little of the sunlight, just enough to buy us more time. It would actually be cheap and efficient; it’s kind of horrible to put it that way because nobody in their right mind would be enthusiastic about it. You just need a couple of airplanes sprinkling stuff up there, and it could be done for a couple billion dollars a year. So in a country like Indonesia, which is at risk of losing significant territory to sea rise, and has something like 60 billionaires — you could imagine it right? An individual billionaire might just choose to do this. Prophets see this as crazy, as fighting pollution with pollution.

So the other way to do it, the prophet’s way, is to use those natural carbon-eating devices known as trees. There are large blank spots on the map that don’t have much vegetation — the Sahara, the Australian outback — but they were covered with vegetation in the past. You could reforest them with drought-tolerant trees, proceeding from the edges with desalination plants along the coasts providing water. You could take a significant bite out of the carbon load in the air. A lot of reforestation has been done in the last 20 years in the Sahel, just beyond the Sahara where there’s more rain, and it looks pretty nice.

Q. Why are these such big fights? It seems like we’d want to try all of these solutions.

A. These arguments are often framed pragmatically, but they are really about values. Prophets, for example, don’t like nuclear power and often will say, correctly, “Oh we don’t like it, it costs so much.” But even if circumstances changed and nuclear costs went down, it’s not the case that prophets would then say, “Great! Let’s go for nuclear power.” Because it represents a way of life they don’t want, one in which big machines deliver energy and people live in big cities. It seems to them to be a recipe for atomized anomie.

The wizards look at distributed solar and wind and say, correctly, “There are all these problems with storage and shuffling the power around.” But even if we solved the storage problem the wizards wouldn’t embrace distributed renewables because they see it as something that ties people down to their communities and requires a whole network of social obligations and doesn’t maximize individual liberty. Some people value liberty and some people value community — it’s an ancient fight. There’s no law of physics that says you can’t have both — that you can’t use a mix of solutions. But it’s hard because these value questions are at the bottom.

Q. Can we transcend those values? My smartest sources often seem like they are able to toggle back and forth between prophetic and wizardly thinking.

A. I suspect that the reason your go-to people can switch back and forth is that they’ve thought about it and realized that the facile “this just will never work” arguments are often wrong. And they’re researchers so they are trying to tell you what they’ve figured out empirically.

What’s striking to me is how long these arguments have gone on without most people seeming to blend them in the middle. Its seems perfectly logical to have both, but that’s not what seems to happen.

Q. I started out very much a prophet, but eventually got a little frustrated because as a prophet you are preaching in the wilderness and it feels like nothing ever changes. Meanwhile, the wizards are out there building things.

A. That’s an occupational hazard for prophets. But in fact they have changed a great deal. Just the existence of Grist suggests that they are not really alone in the wilderness. The prophets often don’t see how much progress they have made, but it’s really striking to me.

Q. It seems to me that we’re living in the wizard’s world, but we are guided more and more by the prophet’s politics.

A. It’s true that Borlaug won out in the beginning, but now even the people working on that huge C4 rice photosynthesis initiative will start by talking about how it’s good for the environment.